The House approved the largest stimulus package in U.S. history Friday as part of the response to the economic crisis caused by the coronavirus pandemic, sending the measure to President for his signature.

Hundreds of House members traveled back to Washington to overcome the demand from one Republican to hold a recorded vote. The House passed the $2 trillion package by voice vote Friday, after the Senate’s 96-0 vote Wednesday to approve the measure.

Trump will sign the bill at 4 p.m. Friday in Washington, the White House said.

“Our nation faces an economic and health emergency of historic proportions,” House Speaker said before the vote. “We do know that we must do more.” 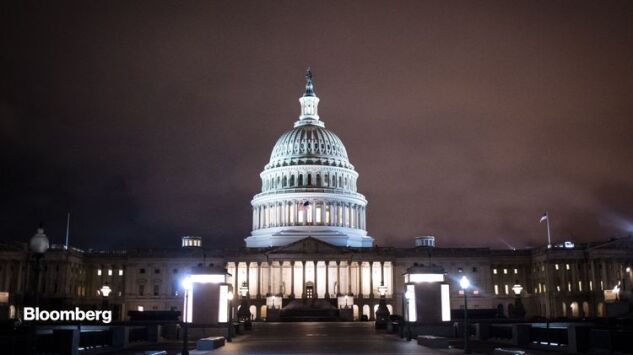 WATCH: The House approved the largest stimulus package in U.S. history Friday. It now goes to the President.
Source: Bloomberg

Congressional action comes as the U.S. is reeling from the effects of the global health crisis. Infections in the U.S. have topped 92,000, passing the number of cases in China where the disease first emerged. Unemployment claims spiked to 3.3 million last week, dwarfing previous highs in Labor Department reports published since 1967.

“To the American public, if you do your part, I promise we will do ours,” Republican leader said Friday. “We are going to help Americans through this. We are going to do this together.” 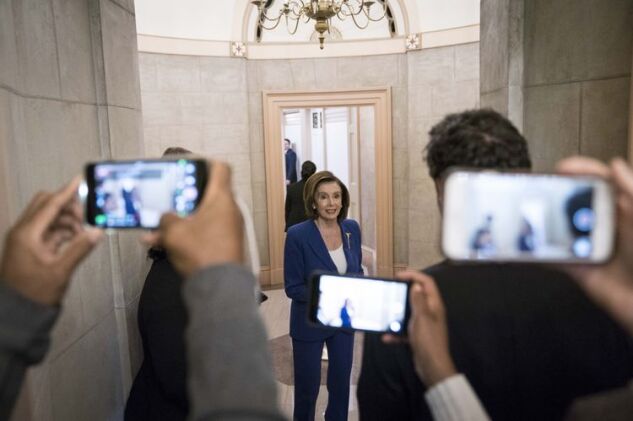 The size of the stimulus package is unprecedented, surpassing the approximately $800 billion Obama stimulus that passed five months after the 2008 financial crash. Together with Federal Reserve actions, the legislation will amount to a injection of $6 trillion into the economy, according to White House economic adviser Larry Kudlow, or about 30% of annual gross domestic product.

The House vote took place under unusual circumstances, with three members known to be infected with the coronavirus, including Democrat of South Carolina, who said he learned Friday that he had tested positive. Others have placed themselves in quarantine because of possible contact.

Representative , a Republican from Kentucky, angered many of his colleagues -- and Trump -- by insisting on a vote procedure that requires the presence of at least half of the House members. Lawmakers gathered on the House floor and in the visitor’s gallery to provide a quorum while maintaining the social distance recommended to avoid spreading the virus.

Enactment of the bill will send direct payments to low- and middle- income Americans, and the unemployed will receive expanded benefits through at least July. Companies of all sizes will have access to emergency financing and tax breaks if they retain employees.

Stocks rose sharply this week as the Senate completed work on the bill. The S&P 500 had its best three day increase since 1933 before declining as much as 4% Friday.

The package provides about $500 billion in loans and assistance for big companies, provided they do not conduct stock buybacks and retain most employees. Airlines are eligible for grants in exchange for giving the government equity stakes. 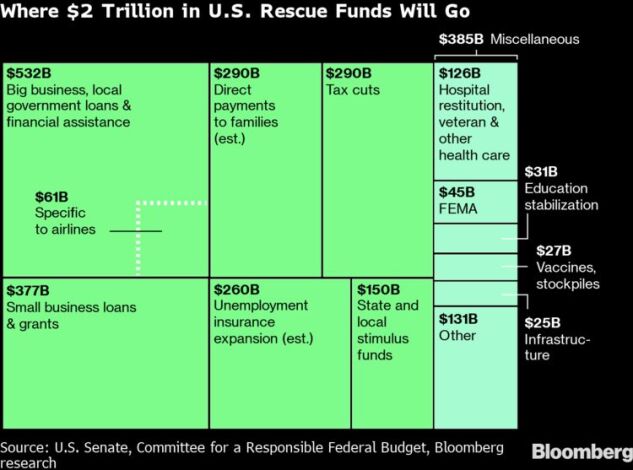 There is a separate pot of about $350 billion for small businesses loans, which won’t have to be paid back if used to to make payroll or pay mortgage interest and rents.

The stimulus bill provides funding to allow states to boost weekly unemployment benefits by $600 through July 31. Maximum state benefit range from $235 in Mississippi to $823 in Massachusetts depending on income. The added boost would be four months for those laid off now, but less time for those losing their jobs closer to July.

Those affected by the virus would be allowed to take up to $100,000 out of their employer-sponsored retirement funds without penalty. It also would let older retirees avoid having to sell retirement investments in a down market by waiving minimum distribution requirements for Individual Retirement Accounts. Students get relief from student loans, and some mortgage holders with government backed loans will be able to delay payments.

Congress has now enacted three major bills in response to the coronavirus pandemic, including an $8 billion bill funding agencies tasked with fighting the disease and a $100 billion measure focused on providing paid sick leave to workers to encourage them to stay home if infected.

Pelosi on Thursday predicted another round of direct payments and expressed hope for infrastructure spending.

(Updates with Trump planning to sign bill at 4 p.m. in the third paragraph)