The House could vote on a Democratic plan for the next multibillion-dollar virus relief package as soon as next week -- if the party can overcome some internal disagreements about what should be included, Majority Leader said.

Although House Speaker has said any additional aid plan would need bipartisan support, Democrats are sorting through proposals that will articulate their own policy proposals. Hoyer said Wednesday that committee chairman are collecting ideas from lawmakers, and once that’s done will finish writing the legislation. 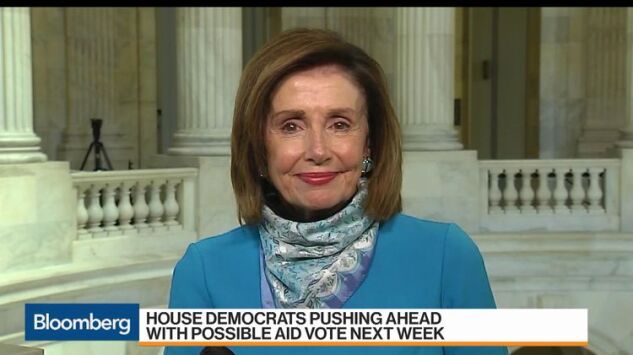 House Speaker Nancy Pelosi says her members could vote on a new coronavirus aid bill as soon as next week.
Source: Bloomberg)

“The timing of when we come back will be dictated as to when we are ready and have a bill that is ready for consideration on the floor of the House of Representatives,” Hoyer said on a call with reporters. “At that point in time, we will call members back.”

The No. 2 House Democrat told reporters the party is in full agreement on the need for money for state and local governments, as well as additional funding for smaller municipalities.

He didn’t specify the issues that are still being negotiated within the party and didn’t answer a question about concerns being raised by some Democrats in swing districts about moving ahead without first negotiating with Senate Republicans and with only Democratic priorities.

Pelosi, speaking separately on MSNBC, said that she will discuss the way forward on the next bill with members of her leadership team Wednesday, including whether the House should vote first on a Democratic proposal before negotiating with Republicans and the White House.

“I will definitely present that as an option,” she said.

Senate Majority Leader and other Republicans have indicated they want to slow down work on the next aid package until they can assess the impact of the almost $3 trillion already passed. In addition, President has listed his own demands for the legislation -- including restrictions on aid to states, an unspecified payroll tax cut and other changes to the tax law -- that have only limited support among Republicans and none from Democrats.

Hoyer said that he hoped discussions with Republicans and the White House would get underway soon to speed the legislation to passage.

“We want to see a bill that’s signed. We just don’t want a political message,” he said.

But if Republicans want to hold off on more aid, Hoyer said Democrats will proceed “to vote upon our priorities.”