The logo for DraftKings is displayed on a smartphone in an arranged photograph taken in Little Falls, N.J.
Photographer: Gabby Jones/Bloomberg via Getty Images

States have collected hundreds of millions in gaming taxes since the Supreme Court overturned the federal ban on sports betting a few years ago, and the IRS wants its fair share. As many as 149 million taxpayers could be on the hook for taxes on legal winnings this tax season, 23 million more than last year.

Whether you’re a casual gambler or a pro, reporting your winnings correctly isn’t exactly a slam dunk. There are forms you may or may not have received, and limits to the losses you can write off.

For 2020, no one will report winnings from March Madness, since the tournament was canceled last year due to the pandemic. Here’s one scenario (which you wouldn’t have to worry about until the 2021 tax season): 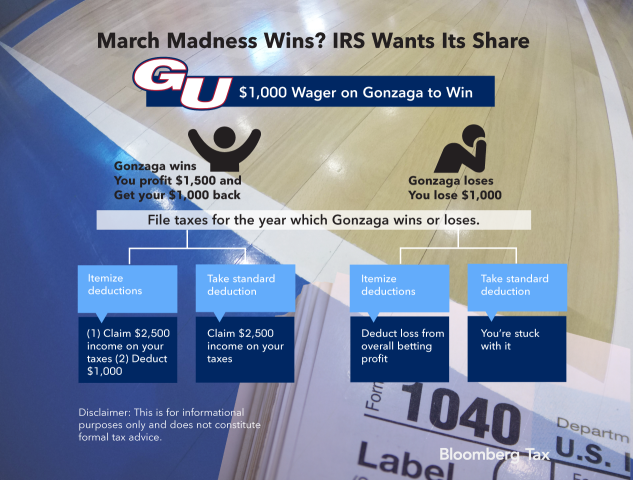 When do I need to report?

Receiving a tax form is not the trigger for filing, however. Whether it’s just a few bucks on the game or a side bet with a friend, the IRS treats it as income.

That being said: The odds that the IRS launches an audit for a few missing dollars are lower than your next long-shot bet. While taxpayers are obligated to pay taxes on even the smallest of winnings, most don’t follow the law that closely.

If you gamble for fun, you include your winnings as income on your Form 1040. It’s considered “other income” and is included on line 8. That’s true whether it’s a wager on the NCAA tourney or a lottery or raffle.

If you gamble professionally, you’ll report your winnings on Schedule C, just as if were business income.

What about fantasy sports?

Daily fantasy sports companies may issue you a Form 1099-MISC instead of a W-2G. Why? DFS is treated as a game of skill in some states, rather than as a game of chance. And while that feels like a slight distinction, it can impact the tax consequences: the treatment of gambling income and losses tends to be more favorable than prize income.

And, the IRS twice in 2020 announced plans to treat these contests as games of chance for tax reasons, although top DFS operators have been adamant their stance runs afoul of federal case law.

Do I report the money I wagered? Or just my winnings?

What about my losses?

If, instead, you put down $1,000 and lose it on a bet, you can write that off as a loss on Schedule A of your 1040, reducing your tax liability — but only if you itemize. Otherwise, your loss is a personal expense: the IRS treats that like spending money on a movie ticket.

Most people never itemize, however, and even fewer after the Tax Cuts and Jobs Act roughly doubled the standard deduction to $12,000 for individuals and $24,000 for married couples. That means no write-offs for most gamblers.

If you’re a professional gambler, you have more luck. You do not have to itemize to claim your losses — you can report those on Schedule C.

The TCJA also modified the definition of “gambling losses” under section 165(d). If you have $10,000 in winnings, you can deduct combined losses up to that amount. Before the TCJA, professional gamblers could deduct travel and other costs related to gambling without regard to wins and losses. transaction.

I bet on my team to win it all last year, but got paid during a different tax year. What do I do?

Most sports leagues schedules overlap year to year. If you bet on the Tampa Bay Buccaneers to win the Super Bowl before Week 1 of the NFL season in August 2020, you got paid out in a different tax year. For these “future” bets that can span over the course of multiple tax seasons, you report your winnings when you receive them. So for all you Tampa Bay bettors: report that on your 2021 return.

What about illegal gambling?

OK, so you’re asking for a friend.

If you bet in one of the 30 states where gambling is either still illegal or there’s nowhere legal to bet yet, the IRS still wants a piece of your earnings, so you have to claim it the same way you would a legal wager. The IRS just wants to get paid.