Companies in India remain almost completely locked out of being acquired by special-purpose acquisition companies nearly a year after India’s finance minister promised to relax foreign investment rules and let SPACs buy and list its companies.

The number of SPAC deals that have taken Indian companies public on the U.S. stock exchanges remains stuck at exactly three—even as an estimated $120 billion in capital seeks deals in Asia.

Rules aimed at protecting investors from unvetted shell companies have essentially barred SPAC investments, and any workaround involves convoluted cross-border structures that India has tried to thwart with punishing tax consequences that wipe out any benefits to going public.

“India has approximately 50,000 startups and over 45 unicorns, so we estimate there to be a minimum of $150 to $200B that could be unlocked in the short to medium term should SPACs be open to Indian companies,” said Rajive Keshup, investment director at global venture capital firm Cathay Innovation fund that oversees $4 billion in assets.

India has proposed allowing SPACs to list directly onto an exchange located in a special financial zone called GIFT City, and relaxing rules for a special class of institutional investors that have deep pockets and an appetite for risk. But entrepreneurs, fund managers, and tax professionals say both proposals fall far short of reversing the restrictive rules.

“Broadly speaking, there is no concrete framework that would allow for SPAC transactions in any meaningful way,” said Ashish Kabra, who leads Nishith Desai Associates’ office in Singapore, and one of the architects of an $8 billion SPAC deal that will take India’s ReNew Energy public in the U.S. in the second quarter of 2021.

Frustration from Indian companies and investors comes as the Securities and Exchange Commission increases its scrutiny of U.S. SPACs, including their accounting practices, and companies run low on targets in North America. Now Asia is starting to draw more attention. Goldman Sachs, for example, has set up a dedicated SPAC banking operation in Hong Kong.

India has “one of the world’s most buoyant startup ecosystems after Silicon Valley,” Kabra said, creating huge potential if the Indian government allows more direct foreign investment by SPACs.

“We think today’s environment is a product of the combination of pent-up demand for companies waiting to go public catalyzed by limited alternative financing options from established Asian exchanges,” Keshup said. “Currently, the markets drawing the most activity are Singapore, Indonesia, and India, though the latter still has some regulatory hurdles to wrestle with.”

SPACs, also known as blank-check companies, are funded by public investors prior to identifying a target company to combine with or buy. SPACs announced deals worth at least $70 billion so far in 2021, already outpacing all the announced deals from the previous two years, according to data compiled by Bloomberg. And international markets want to attract those investors.

“Prior to this year, I’d say less than 10 percent of SPACs were foreign focused SPACs, but 2021 is going to have much more of a substantial international focus,” said Douglas Ellenoff, partner at Ellenoff Grossman & Schole LLP, in New York, who has worked on 375 SPAC IPOs. “I’ve already seen it.”

SPACs are running out of promising target investments in North America—home to 86% of the targets that were announced in 2020, while deals in the Asia-Pacific region made up just 5%, according to the Bloomberg data.

Credit Suisse estimates that India is home to at least 100 “highly-valued, as-yet unlisted” unicorns—startups worth more than $1 billion each—with a combined market capitalization of $240 billion. 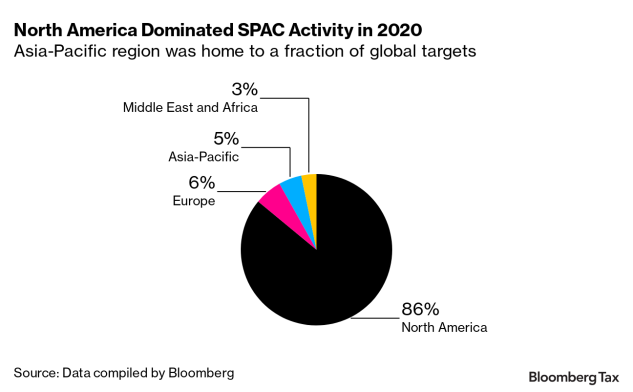 In February 2020, India’s Finance Minister Nirmala Sitharaman promised to relax foreign investment rules in her budget speech. The government followed through in various sectors—but has yet to release a framework that specifically enables SPAC deals.

India did release a domestic SPAC proposal last month to “keep pace with the evolving market environment”—but it falls short of enabling many of those companies from becoming targets for global investors because it only allows domestic SPACs to acquire them, and limits future listings to a single financial zone called GIFT City.

“There is a significant difference in the quantum of capital which can be raised through a foreign SPAC versus an Indian IPO—also the valuations a high-growth new tech company can get through a foreign SPAC are not comparable to what public market in India offers,” said Amit Sureka, chief financial officer of Eka Software, a risk management company for the global commodities market.

By contrast, Hong Kong is on track to release a SPAC investment framework for consultation by June, and Singapore also is hoping to get SPACs listed this year.

“It’s competition between countries, between exchanges, whether it’s in New York, Hong Kong, or London,” Ellenoff said. “And every regulator ought to be mindful that the tighter their rules are, the less attractive it is to do business with the domestic country.”

India toughened its foreign direct investment rules in 2013—blocking direct acquisitions of Indian companies by offshore parent companies and purging nearly a quarter million suspected shell companies from the stock exchange in Mumbai. That move was aimed to stop profits generated domestically from flowing into an offshore entity that may have been set up for tax avoidance.

“The Indian government has been against shell entities, because those entities that have no business activities were used very indiscriminately for tax avoidance, routing money, and money laundering,” said Ajay Rotti, partner at Dhruva Advisors LLP, based in Bengaluru, India.

But another objective of those rules, introduced in the Companies Act, 2018, is to insulate the rupee from global currency fluctuations—an issue that could get worse with cross-border cash-for-shares swaps.

Those rules are now stonewalling global SPACs from tapping Indian companies because they’re treated under Indian law as shell entities without a track record.

For example, if a U.S. or Cayman Islands-based SPAC wants to merge with an Indian company, it would have to engage in a share swap. But doing so is prohibited by Indian law unless the transaction is sanctioned by India’s central bank.

“It becomes an Indian company that holds shares in a foreign entity that has a path back to India,” Gupta said. “That’s a full round trip, and any structure that results in this final holding pattern requires RBI approval because the SPAC is not holding Indian shares for any business purposes.”

Getting that Reserve Bank of India approval can take months or even years, if the company applying decides to appeal the RBI’s decision in court. And once the Indian company gets approved, it still faces a second regulatory hurdle.

“Indian residents are prohibited from owning shares of an overseas company beyond a prescribed limit, because they haven’t technically paid any cash for those shares and that causes some currency considerations,” Rotti explained.

India’s foreign exchange rules clearly state that the cash value of those shares has to be recognized immediately. In the case of a SPAC deal, the Indian resident has to get additional RBI approval to deem the share swap a legitimate transaction and a transfer of foreign cash for Indian assets. And that second hurdle leads to a painful tax bill for Indian shareholders of the combined entity when it comes time to sell their shares.

“The GIFT City proposal is an outcome of trying to imbibe the global SPAC regime, but still a lot needs to be done to encourage SPAC listings for Indian companies,” she said.

Said Keshup: “While this may be wishful thinking, it would be helpful for the entire ecosystem to see separate classifications of start-ups and potential foreign investors,” specifically as they relate to the 2013 and 2018 laws.

As it stands, India doesn’t recognize the exiting of offshore shares as a tax neutral transaction, as it would a purely domestic sale of shares. Because the values of SPACs are unknown, the impending tax bills could be a complete surprise for Indian shareholders.

“So the Indian resident has to take the fair market value of the shares they received from the SPAC and treat it as if it’s a taxable transfer and pay capital gains taxes even though they didn’t receive any cash in the transaction,” Rotti said.

This could be a major deterrent for Indian entrepreneurs who may have to dilute ownership in their own company to cover tax expenses, practitioners said.

One way to usurp those regulatory and tax consequences is to set up a blocker corporation to act as a holding company of the Indian entity. And rerouting headquarters outside of India is becoming part of the playbook for Indian companies seeking alternative methods of financing, Keshap said.

Doing so would allow an Indian company that wants a cash infusion from a SPAC to get it from its holding company—based in a country like Singapore or Mauritius—which does the deal with the SPAC to keep it completely outside the bounds of India’s regulatory and tax rules.

“When an Indian company becomes a wholly-owned subsidiary of a blocker, and the founders of the Indian entity become shareholders of the blocker entity, that becomes taxable in India,” Rotti said. “That’s why a lot of founders are staying away from creating a blocker because even without any cash coming in, and even without a listing, you end up paying tax.”

The GIFT City proposal would relax some of the regulatory issues regarding compliance with Indian reporting and disclosure issues, but a comprehensive regulatory framework that lets Indian companies list abroad is still lacking.

“India may believe that companies that want to list and raise money can do so very well in India,” Rotti said. So “there’s no need to have access to the foreign markets at this point.”