More than half of states around the country saw sales tax collections fall in April for the first time since last summer, an early warning sign that trouble may be brewing for budget officers in fiscal 2023 as consumers adjust their spending habits because of decades-high inflation.

Twenty-six states—Maryland, Connecticut, Massachusetts, and Iowa among them—saw lower sales tax revenue in the month than a year earlier, after adjustments for inflation. Sixteen others reported slower growth compared with a year earlier, according to an analysis by the Urban-Brookings Tax Policy Center.

While monthly reports can be noisy, April’s sales tax weakness could augur a worsening trend for state revenues as recent data show consumer spending slowing down. Retail sales in May fell for the first time in five months, suggesting consumers are buying less amid rising inflation, according to data released from the Commerce Department on June 15.

“If things continue the way they are and if wages are not keeping up with inflation, then we will be seeing people spending less,” said Lucy Dadayan, a senior research associate at the Urban-Brookings Tax Policy Center and author of the analysis, which the center does monthly. “Moving forward, people are going to be a lot more mindful with their money and spend much less on non-necessary, discretionary items, which means we’ll see further weakness in state sales tax revenue.” 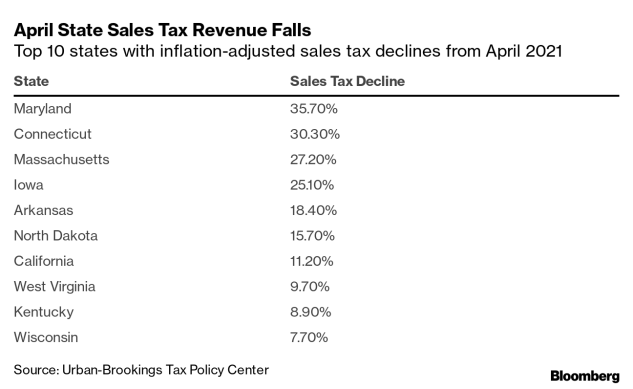 ‘Not a Huge Shock’

For months, state budgets have benefited from inflationary pressures, drawing in greater tax revenue from higher-priced goods and a rise in wages. New Jersey updated its forecast in May with anticipated state revenue of $51.4 billion in fiscal 2022, which ends this month—a 35.3% rise in only two years. New York recently closed its fiscal year with 33% higher revenue than originally forecast—up $30 billion.

As consumers have shifted habits back to pre-pandemic spending, away from goods toward often untaxed services such as vacations and entertainment, it eventually will mean lower state tax receipts. Budget forecasters already anticipate an economic slowdown as the Fed moves quickly to raise interest rates to clamp down on inflation.

“It’s not a huge shock to see a slowdown in sales tax collections,” said Eric Kim, head of US state ratings and senior director for Fitch Ratings. “Most states were anticipating some slowdown from the growth we saw this fiscal year. It was just so robust, and no state really anticipated this level of growth to continue.”

Thirty-seven states plan to maintain or increase their rainy day fund balances in 2023 as they brace for a slowdown, according to the latest quarterly fiscal survey from the National Association of State Budget Officers, released June 16.

“It’s not that states are immune from these pressures in the economy, just that they are well-positioned,” Kim said. “We expect that if there is a downturn and there is volatility, states can respond as they have through prior downturns.”

Revenue forecasts in governors’ recommended budgets show modest growth of 1.4% in fiscal 2023 compared with an estimated increase of 3.2% in fiscal 2022, according to the NASBO survey.

The projected declines are forcing governors in New Jersey, California, and other states to recalculate how best to spend their remaining multibillion-dollar surpluses this year.

“I’m worried about where the economy is headed this year,” New Jersey Gov. Phil Murphy (D) said on a June 8 radio show. “It’s strong, but I fear we’re heading into heavy waters.”

Sagging consumer spending can be particularly troublesome for New Jersey, whose biggest general-fund money source is the sales and use tax. For next year, Murphy anticipates collections will rise just 2%, to $12.6 billion. By comparison, sales tax collections in the first half of the current fiscal year were 13% higher than the previous period.

Murphy wants to provide additional property tax relief to residents, put at least $1.3 billion toward debt reduction, and sock more away for an emergency, while his GOP colleagues are pushing for $8 billion in tax relief.

California also projects growth in sales tax revenue will level off in the coming years because of consumer spending shifts and rising prices, according to the state’s Department of Finance.

“This spending shift is expected to unwind from 2022 to 2025 as spending habits are assumed to normalize, leading taxable consumer spending to stay relatively flat at 2022 levels,” the department said in May as part of the governor’s annual budget proposal.

The department forecasts taxable sales are expected to increase 15.8% in the current fiscal year but grow at only 5.3% in the fiscal year that starts July 1.

“Unfortunately, many states have just been thinking in the short term and have enacted tax cuts, mostly for income tax, and now, the impact of the tax cuts combined with the new reality and the end of the federal aid will put states in a really tough position,” Dadayan said. “They will have to look for different alternatives for raising revenues.”