In 2018, the U.S. became a net acquirer for the first time since 2011 in the context of cross-border mergers and acquisitions.
Photographer: Scott Eells/Bloomberg

In 2018, the level and share of U.S. acquisitions of foreign companies rose sharply, and, for the first time since 2011, the U.S. was a net acquirer in the context of cross-border mergers and acquisitions (M&A). Below we provide a snapshot of U.S. M&A activity (including cross-border M&A) between 2004 and 2018, with a focus on 2018 results.

As shown in the figures and tables, the amount and composition of U.S. M&A activity changes significantly from year to year. Notable 2018 results include:

Since 2004, M&A activity has varied dramatically from year to year (see Figure 1). It peaked at nearly $1.5 trillion in 2007, then during the recession, fell by more than half, to below $700 billion. Since the end of the recession, M&A activity has trended upward, although with significant year-to-year variation. Throughout this time period, U.S. acquisitions of domestic companies have dwarfed U.S. acquisitions of foreign companies. As seen in Figure 1, both types of acquisitions tend to move together over time, rising and falling in the same years.

Both foreign and domestic M&A transactions rose sharply in 2018. However, determining the causes of this change is beyond the scope of this paper, which simply presents the data. In particular, while the recent U.S. tax reform—the Tax Cuts and Jobs Act (TCJA)—might have caused some of the increase in 2018 M&A over 2017, the significant year-to-year variation in M&A activity makes it difficult to judge the TCJA’s precise effect by simply looking at the raw data in Figure 1. Additional statistical analysis, and probably additional years of future data, would be required to tease out the TCJA’s effect. 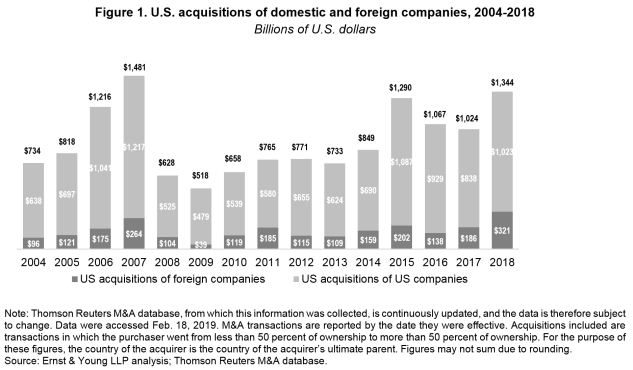 As seen in Figure 2, since 2004, the pattern of year-to-year changes in the level of total U.S. cross-border M&A has followed fairly closely the pattern of total U.S. M&A. Cross-border M&A rose sharply from 2004 to 2007, then fell during the recession. Since the end of the recession, cross-border M&A has generally trended upward, but with year-to-year variation. Both types of cross-border transactions, U.S. acquisition of foreign companies and foreign acquisition of U.S. companies, have followed this general trend. The split between types of cross-border M&A varies from year to year. The level and the share of U.S. acquisitions of foreign companies rose from 2016 to 2018, and rose sharply from 2017 to 2018. As mentioned above, without detailed statistical analysis (and possibly additional years of data), it is impossible to tease out the reasons, tax or otherwise, for this increase. Attributing the increase to the TCJA may not be warranted. 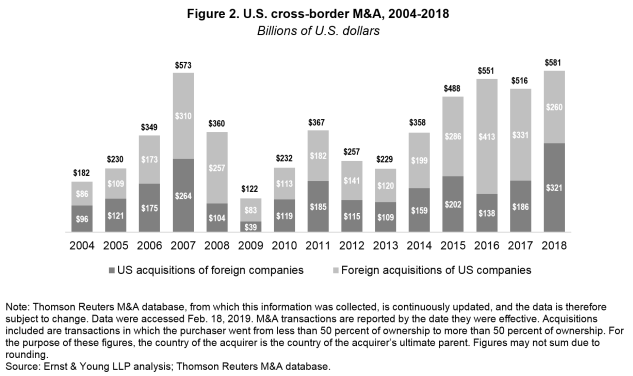 Tables 1 and 2 show the industry composition of U.S. cross-border M&A for 2017 and 2018. For each type of transaction, U.S. target and U.S. acquirer, the industry mix varies noticeably between 2017 and 2018. The industry mix also varies between U.S. targets and U.S. acquirers within each year. This is in part because the effects of a few very large mergers can dominate the data for a given year. In 2017 and 2018, the largest U.S. target industries included materials, real estate, energy and power, healthcare, high technology, consumer staples, and industrials. Energy and power and high technology were in the top five each year. The largest U.S. acquiring industries included financials, materials, media and entertainment, consumer staples, high technology, retail, and industrials. Financials and high technology were in the top five each year. 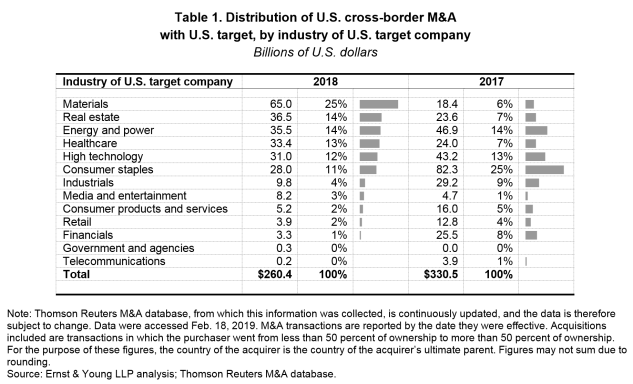 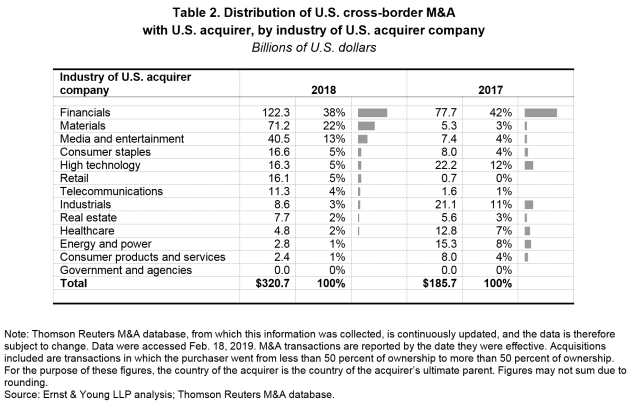 Table 3 shows the largest target and acquirer countries for U.S. cross-border M&A activity in 2017 and 2018. There is substantial overlap across years for target countries, with Germany, Canada, the U.K., and France in the top five each year. There is less overlap across years for acquirer countries, and only Germany and Canada are in the top five each year. Despite variation over time, larger western countries dominate both lists. 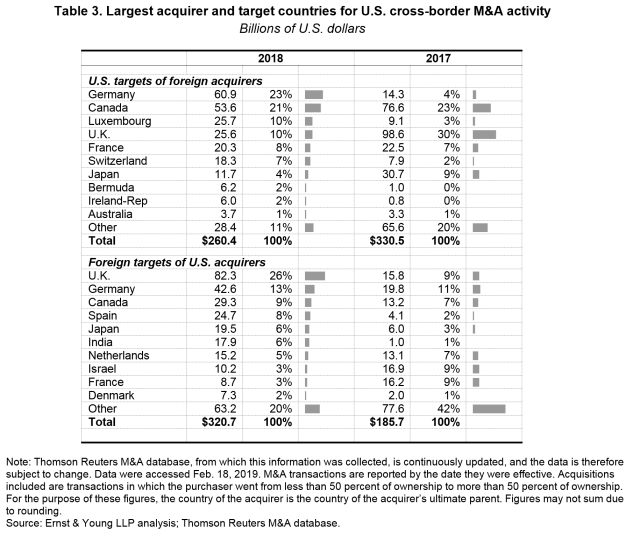 In a dynamic economy, companies must frequently adjust their operations in response to the changing marketplace to better serve customers, respond to technological change, and compete. One way companies do this is by divesting some business units and acquiring others. Mergers, acquisitions, divestitures, spin-offs, and other activities that change the scope and focus of a company’s business are all examples of business reconfigurations. These business reconfigurations are an important tool, particularly for companies in innovative, high-growth sectors, because they may need to adjust to rapidly changing markets.

Like other business reconfigurations, M&A may produce many economic benefits. These include creating business synergies that may increase the value of the combined companies, which provides financial gains to both the acquirer and target, releases capital for reinvestment, and helps ensure that capital is more efficiently allocated throughout the economy. Cross-border M&A can provide access to local know-how, product types, specialized suppliers, workforces and capital markets, all of which can have an important influence on companies’ competitive capabilities.

The views expressed are those of the authors and do not necessarily reflect the views of Ernst & Young LLP or any other member firm of the global Ernst & Young organization.

Bob Carroll is a principal, James Mackie is an executive director, and Brandon Pizzola is a senior manager in Ernst & Young LLP’s Quantitative Economics and Statistics group.