There has been growing interest in recent years among congressional lawmakers to increase funding for the IRS.
Photographer: Andrew Harrer/Bloomberg

The Trump administration proposed $12 billion in IRS funding for the 2021 fiscal year, continuing a trend of modest increases for the agency as it tries to increase enforcement and implement the 2017 tax law.

The proposal, which was released Monday, is an increase from the $11.51 billion enacted funding level for the agency. The proposed budget provides for $300 million to modernize the IRS’s information technology infrastructure. The document is meant to lay out White House priorities, but ultimate funding levels are set by Congress.

“The goal really is to rebuild the IRS and in that sense there is some positive things in the budget,” said Chuck Marr, director of federal tax policy at the Center on Budget and Policy Priorities. “The administration recognizes that spending on the IRS is special. It actually raises money.” 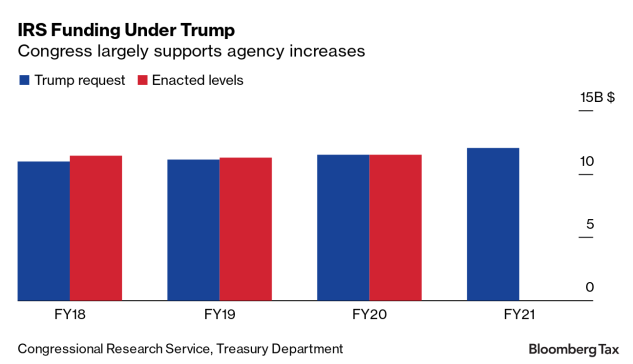 The proposed increase would come at a time that the IRS is considering its future. It must send a reorganization plan to Congress—required by the Taxpayer First Act (Pub. L. 116-25)—by Sept. 30, although it is expected to do so sooner.

Lawmakers spent years cutting funding to the agency, but the overall view of the IRS and the work it must accomplish shifted after the 2017 overhaul. It remains to be seen if a Republican Senate and a Democratic House can find agreement on the proposals. Lawmakers have typically shown the most interest in investments for enforcement and technology.

The budget also proposes legislation that would enable additional funding for the IRS to strengthen enforcement. The proposed investment could ultimately yield a net savings of $64 billion over 10 years.

“Once the new enforcement staff are trained and become fully operational these initiatives are expected to generate roughly five dollars in additional revenue for every one dollar in IRS expenses,” according to a document accompanying the budget.

Enforcement has been a key focus for IRS Commissioner Charles Rettig, who regularly uses public events to spotlight the agency’s efforts to crack down on abusive land-use transactions, insurance tax shelters, and cryptocurrency tax evaders.

The proposal is a reflection of how the Trump administration feels about the agency, said Jeff Trinca, vice president of Van Scoyoc Associates and a former tax aide in Congress.

“They have demonstrated year in and year out that they understand that if the agency actually, if it has more funding, it brings in more revenue,” Trinca said.

Senate Finance Committee ranking member Ron Wyden (D-Ore.) said Monday night that the IRS needs more work on enforcement. “We still have a long way to go in terms of tax enforcement when we have seen tax enforcement, so often in the past, you know, focused on vulnerable folks and giving a free ride to the wealthiest.”

Oklahoma Republican Sen. James Lankford, also a Finance member, said “You’ve got to be able to have good enforcement. None of us want to say that you make law that people can just randomly ignore.”

To contact the reporter on this story: in Washington at kbasu@bloombergtax.com