The IRS plans to bring on more than 5,000 new employees as part of its biggest hiring surge in a decade.
Photographer: Zach Gibson/Getty Images

The IRS is in the midst of one of its biggest hiring surges in almost a decade, the agency’s leader said.

The agency hired about 9,700 people during fiscal 2019 and is in the process of bringing on an additional 5,300 people, IRS Commissioner Charles Rettig said Nov. 14 at the American Institute of CPAs conference in Washington.

“That’s the first significant hiring that we’ve had certainly since about 2011-2012, something like that,” he said.

The IRS lost about 20,000 employees from 2010 through 2018, according to data from the Office of Personnel Management. Much of that decline was due to budget cuts. 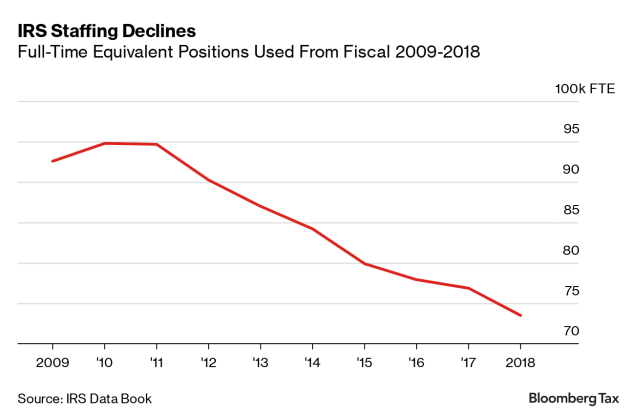 The Treasury Inspector General for Tax Administration in an October memo said staffing reductions at the IRS have made it harder for the IRS to address its top challenges, including combating cyberattacks and implementing the 2017 tax law.

The agency is doing everything it can to address the issues it has with attrition, Rettig said.