The IRS on Wednesday pulled language from its website that would have subjected millions of users of the popular video games Fortnite and Roblox to a new disclosure requirement after Bloomberg Tax asked about it.

A recently revised attachment to Form 1040, which taxpayers use to file their annual income tax returns, asks people to answer a yes or no question on whether or not they received, sold, exchanged, or otherwise acquired a financial interest in virtual currency in 2019.

The IRS’s webpage, which has since been updated, originally listed Roblox and V-bucks as examples of convertible virtual currency, alongside well-known cryptocurrencies, such as Bitcoin and Ether. Bloomberg Tax took a screenshot of that original wording. The webpage has since been revised to list Bitcoin as the only example.

Roblox is an immersive video game that allows users to design their own games. Roblox users can earn or purchase “Robux” to buy avatar upgrades or special abilities. “V-bucks” is the currency used in the immensely popular Fortnite combat game to purchase weapons and outfits. 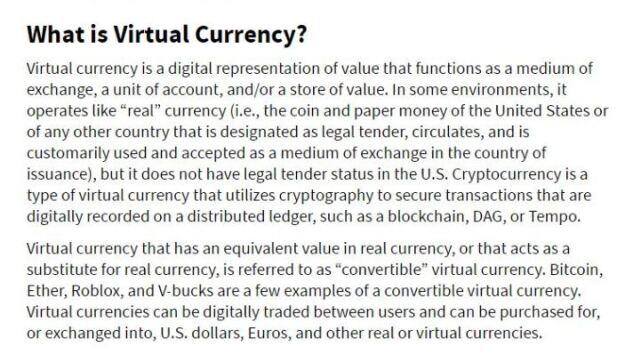 The IRS didn’t immediately respond to a request for comment.

Jerry Brito, executive director of the advocacy group Coin Center, noted this language in a Twitter post early Wednesday. He said it could result in millions of people—Roblox and Fornite combined boast upwards of 300 million users—unknowingly having an obligation to check “yes” on the IRS’s new 1040 question.

“I think a lot of people aren’t going to know that they have to answer ‘yes’ so they’re going to answer ‘no,’” he told Bloomberg Tax.

The added question on the Form 1040 is supposed to help the IRS gather information so it can more effectively crack down on people who may be dodging the taxes they owe on virtual currency transactions. This effort is aimed primarily at investors who aren’t disclosing large gains from transactions involving Bitcoin and other popular cryptocurrencies.

It’s unclear how having millions of people disclose their gaming currency would help achieve that goal, Brito said.

The Epic Games spokesperson said V-bucks shouldn’t fit that definition. “V-Bucks cannot ‘be digitally traded between users,’ nor can they be ‘exchanged into, U.S. dollars, Euros, and other real or virtual currencies,’ ” the spokesperson said.

In comparison, Roblox does allow certain users who are 13 years of age or older to cash out their Robux for U.S. dollars if they have at least 100,000 Robux in their account and are members of the Roblox premium service.

“Robux can only be earned and exchanged by developers for real currency through our Developer Exchange (DevEx) program,” a company spokesperson said in an email. “Prior to any payments being made to developers, we require them to have an IRS form on file with Roblox, and we report all DevEx payments to the IRS using form 1099.”

Users, more generally, can also use third-party online marketplaces to coordinate the sale of gaming currencies for real money, but those transactions aren’t backed or organized by game creators.

“Game economies are typically closed economies where currencies cannot be cashed out or traded,” the Entertainment Software Association said in a statement earlier in the day.

“Financial regulators who have considered the status of game currencies in detail have treated them distinctly different from Bitcoin and similar virtual currencies precisely because they cannot be cashed out,” the association said. “We think that is the appropriate approach and are hopeful that on closer consideration the IRS will correct its guidance.”