Senate Majority Leader Mitch McConnell, a Republican from Kentucky, wears a protective mask while walking to his office at the U.S. Capitol in Washington, D.C. on Dec. 21, 2020.
Photographer: Oliver Contreras/Bloomberg

Congress passed the second-biggest economic rescue package in U.S. history as part of a massive year-end spending bill, concluding months of discord between Democrats and Republicans over how to address the pandemic that continues to surge across the country.

In addition to funding government operations for the rest of the fiscal year, the legislation will provide aid for small businesses, supplemental unemployment benefits and $600 stimulus payments to most Americans and their children starting as soon as next week. It also includes money for schools, airlines and for distribution of vaccines.

The Senate followed the House late Monday in passing by overwhelming margins the $2.3 trillion bill, just hours after lawmakers got their first look at the 5,593 pages of text. The White House has said President will sign it.

Economists say the aid should be enough to avert a double-dip recession next year, though risks remain and both parties expect to be wrangling over addition relief measures after President-elect takes office on Jan. 20. Many of the aid provisions, such as the extended jobless benefits, will expire in the first quarter of next year.

Biden said his administration plans to do more.

“I applaud this relief package, but our work is far from over,” Biden said on Twitter. “Starting in the new year, Congress will need to immediately get to work on support for our COVID-19 plan.”

Republicans had a different take. Treasury Secretary said on CNBC that the aid package “will take us through the recovery.”

While the bill is smaller than many economists had anticipated months ago, it could be enough to ward off another contraction in gross domestic product.

“This latest fiscal rescue package will add approximately 1.5 percentage points to annualized real GDP growth in the first quarter of 2021 and close to 2.5 percentage points to calendar-year 2021 growth,” said Mark Zandi, of Moody’s Analytics. “If lawmakers had not come through, the economy probably would have suffered a double-dip recession in early 2021.”

Lawmakers from both parties complained about having to vote on such a sprawling piece of legislation with so little time to digest the contents.

“It’s not good enough to hear about what’s in the bill. Members of Congress need to see & read the bills we are expected to vote on,” Democratic Representative , who ultimately voted for the legislation, said on Twitter.

“Who in their right mind thinks that this a responsible way of governing?,” Republican Senator of Florida said in a statement before voting against the bill.

Because of the time needed to finish voting and enroll the lengthy legislation on parchment paper so that Trump can sign it -- a process that could take several days -- Congress also cleared a seven-day stopgap spending bill to prevent a partial shutdown of the government.

The final legislation includes $600 direct payments for most Americans and their children. Those with incomes of more than $100,000 would be excluded, as would undocumented immigrants. Mnuchin said the payments will go out as soon as next week.

For the unemployed, $300-per-week in enhanced unemployment benefits will be put in effect through March. Unemployment insurance programs for gig workers and the long-term unemployed also would be extended. There’s $284 billion for the Paycheck Protection Program that provides forgivable loans to small businesses. Companies that previously had a PPP loan can qualify for a new one, and their PPP grants would be made tax deductible.

The package includes money for transportation -- including for $15 billion for airlines -- vaccine distribution, schools and universities, farmers and food aid.

The relief plan is attached to a $1.4 trillion bill that would fund the federal government through the end of the fiscal year on Sept. 30, 2021. That bill adheres to budget caps set during the 2019-debt ceiling fight, including by keeping $12.5 billion in veterans health spending under the cap -- something that cropped up as a last-minute fight. The bill has $1.4 billion for Trump’s border wall and related spending, although the incoming Biden administration could stop construction.

The bill also includes an extension of tax breaks -- for the alcohol and renewable-energy industries, among others -- a law to curb surprise medical bills, a water-infrastructure measure and an intelligence-agency policy bill, among other provisions.

While the bill clears the decks for the incoming Biden administration by wrapping up the fiscal 2021 budget process, it leaves Democrats ready to push for more stimulus after the Jan. 20 inauguration. Many of the aid provisions will expire in the first quarter of next year, so additional relief could be needed by March. 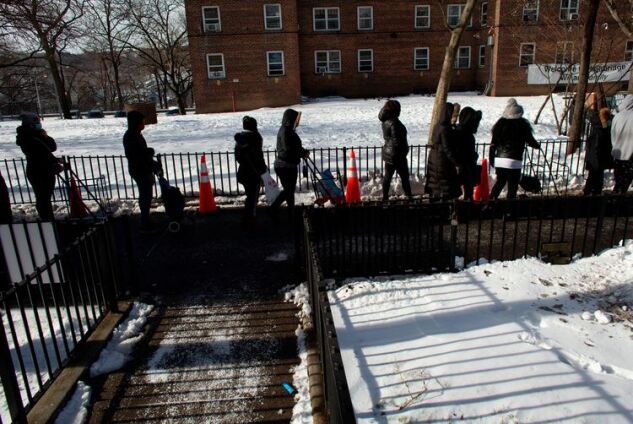 People wait in line at a food bank in the Bronx in Dec. The stimulus legislation includes $600 payments for most Americans.
Photographer: Kena Betancur/AFP/Getty Images

House Speaker and Senate Democratic leader vowed to make another relief package the top priority in the new Congress. That effort is likely to include a push for infrastructure spending, which has bipartisan appeal but is already facing skepticism from Republicans.

Critical to the outlook will be whether Democrats manage to win the two Georgia runoff elections for the Senate on Jan. 5 -- giving them control of both chambers of Congress.

“I think we are going to have a much easier time than we had with a Republican president and a Republican Senate” said Pelosi.

However, even if Democrats defeat the two Republican incumbents in Georgia, Senators David Perdue and Kelly Loeffler, the Senate would be split 50-50 between Democrats and Republicans, giving Vice President-elect Kamala Harris the tie-breaking vote. Meanwhile, because of Democratic losses in the November election, Pelosi will be working with a narrower majority.