Cites are angling to replace the loss of property taxes as nuclear power plants shut down. Shown is an open spent-fuel pool at the reactor building of an Exelon Corp. power station in Delta, Pa.
Photographer: Melissa Lyttle/Bloomberg via Getty Images

Towns and cities across the country face the major loss of property taxes as nuclear power plants in their borders are shut down. They may be able to make up some of the loss, however, by taxing the nuclear waste storage property that still sits on the sites.

A law just signed by New York Gov. Andrew Cuomo could be a model for communities in New Jersey, Illinois, Wisconsin, California, and other states where more than a dozen reactor sites are slated for dismantling in coming years. Without a national repository for nuclear waste, spent fuel has remained in holding facilities next to reactors.

New York’s first-of-its-kind law allows officials in the village of Buchanan and the town of Cortlandt to assess the economic value of storing the waste at the 240-acre Indian Point power plant, whose third and last reactor is shutting down in April.

Officials started wrestling with revenue options as soon as Cuomo reached a deal in 2017 with Entergy, the plant operator, that it would close Indian Point by 2021.

“There’s really no prototypes for this,” Cortlandt Town Supervisor Linda Puglisi said in an interview. “There’s only 100 nuclear plants in the country... We’re kind of doing it ourselves. We will eventually become the prototype—the example for other communities that have closed nuclear plants. We have no textbook to go to.”

As officials faced the stark reality of safekeeping 125 spent fuel casks on two giant pads of concrete each the size of a football field, they needed to devise a plan. While the worth of the spent fuel may be up for debate, the cost of each storage cask was $1 million, according to Buchanan Mayor Theresa Knickerbocker.

“It’s not really fair to the communities not to be compensated for that being stored here,” Knickerbocker said in an interview. “That was not the agreement for the communities to keep it here for an indefinite period of time.”

Where the Value Is

Local officials say that without the legislation, tax assessors would have been left without anything to appraise—only a former nuclear plant without the ability to generate electricity.

“The waste may not be worth anything. The ability to safely store may be where the value is,” Thomas Watkins, Cortlandt’s tax assessor, said in an interview. “This stuff can’t be moved by road, by plane, by barge, by train. It cannot be moved. But guess what? We have a piece of land upon which we can store nuclear fuel. So, what’s it worth?”

But determining its economic price tag won’t happen overnight, and it could take years. Unlike assessing a building or an apartment or an office building, determining how spent fuel is stored is a complicated process that will require further research.

“By not having this door open, we were going to lose a big part of our tax base,” said Watkins. “This was an exercise in securing the ability to assess. I am confident that there is value in this real estate.”

With no economic assessments and data readily accessible, Watkins said he has been researching case studies worldwide on spent fuel, noting variation among different facilities even if in similar situations.

“What the actual number is going to be—he doesn’t have that figure yet, nor do I,” said Puglisi.

New York officials are hoping that their efforts will serve as a template for other states left with offline nuclear facilities and ailing budgets.

“We’re all in the same boat,” Knickerbocker said. “We don’t know how long it will be there. It could be five years. It could be 50 years. Who knows?” 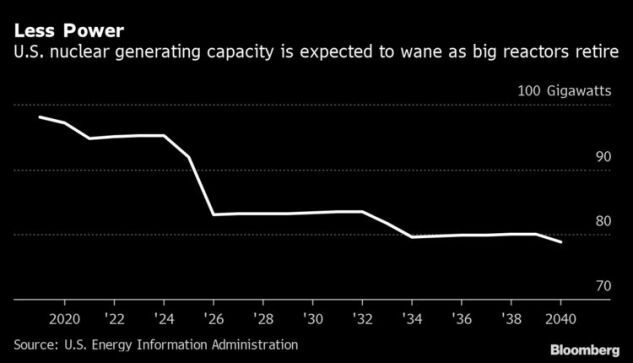 Veronica Laureigh, the administrator for Lacey Township, home to Oyster Creek, an 800-acre nuclear plant in New Jersey that shut down in 2018, has been holding conversations for over a year on how to assess a spent nuclear fuel site.

“We’d love to do something similar to New York,” said Laureigh, who will be attending a meeting this week to discuss whether there’s any chance of passing a bill in the New Jersey Legislature.

“It’s supposed to be temporary, but what is the definition of temporary?” Laureigh said. “I don’t believe that any of these communities that have power plants signed on to the fact that now they’re going to become a waste storage site for nuclear power.”

Lacey Township has suffered less than its New York counterpart, thanks in part to an $11.1 million state energy tax receipts program and property taxes it continues to take in from the dormant facility. But the township risks losing millions in real estate taxes in the near future when plant operator Holtec begins to dismantle the facility. Those plans are still being drafted.

Some communities would have more than one legislative hurdle.

David Knabel, the administrator of Zion City in Illinois, said he has been pursuing a similar approach to help boost the city’s ailing budget after the 1998 closure of the Zion Nuclear Power Station, but faces the additional challenge of changing the current state assessment law first.

He’s faced pushback on whether the five acres of concrete that stores the spent fuel can be considered real estate versus personal property, which could be taxed to help close the gap on his roughly $1.5 million annual deficit.

“You should be paying $120 million in property taxes, because there’s only a dozen places where you can store this, and their argument is going to be the law currently says, ‘You can only value the pads,’” Knabel said in an interview. “We don’t have the assessment law backing us as its currently written.”

To contact the reporter on this story: at dborak@bloombergindustry.com