Each Nationals player is in line for an estimated $416,837 for their postseason efforts, although they’ll bring home about $238,639 after taxes if they live in Maryland or Virginia. Players who live in the nation’s capital will forfeit an extra $13,339 due to the District of Columbia’s higher income taxes. World Series runner-up the Houston Astros are set for $262,027—$165,077 of which they’ll pocket after similar fees.

Players who claim residence outside their team’s area pay their own state income tax.

Typically the income players earn in an opposing team’s state is subject to that state’s income taxes as well—what’s known as a jock tax. This is the first World Series ever where players will avoid those fees, according to Jeffrey Steinberg, a partner at Crowe Soberman LLP, an audit and advisory firm in Ontario.

The pool of money that pays for the bonuses that postseason ball clubs earn comes from the ticket revenue for the extra games they play. Here’s how it’s broken down in Major League Baseball’s 2017-2021 collective bargaining agreement: 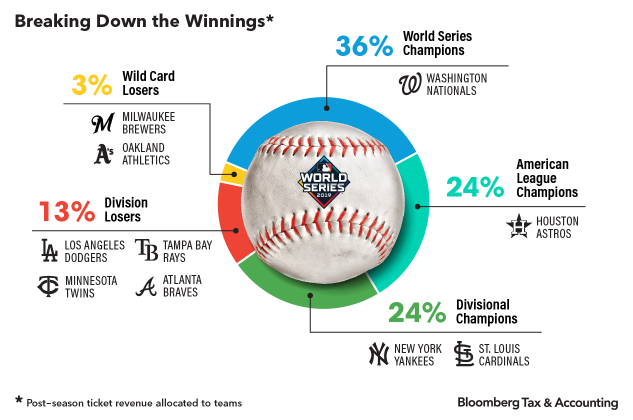 Teams are given the freedom to divvy up their bonuses how they see fit—and under the CBA players vote on how full shares are made available. Teams can also pay employees like security guards and grounds crew staff with partial shares or cash rewards.

The average baseball player made $4.36 million in 2019—subjecting their bonuses to the highest federal tax bracket of 37%. 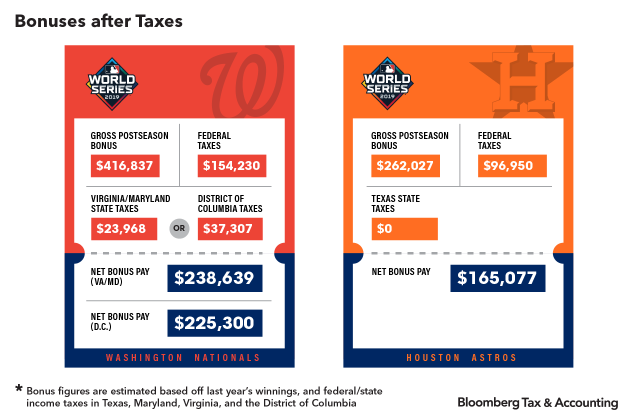 When the Nationals receive their bonuses they’ll owe about $154,230 in federal income taxes, and an extra chunk of change for the state income taxes in Maryland, Virginia and D.C.

Virginia and Maryland each impose a 5.75% state income tax on their highest earning residents—so players living in either state forfeit an extra $23,968 of their winnings. Players residing the nation’s capital get taxed a higher 8.95% rate on their earnings. They’re on the hook for about $37,307.

For the Astros, they’ll owe approximately $96,950 of their earnings to the federal government. Fortunately for players living in-state there are no state income taxes in Texas, so that’s all they owe.

Players will pay an additional .09% Medicare surplus tax, which is charged on individuals making more than $200,000.

Professional athletes pay what are known as “jock taxes” which are different state income taxes applied to the total number of days a player performs “income-related work” in a different particular state. Even if an Astro lives in Texas, where there’s no state income tax, they still pay income taxes for the money they earn in other states they play baseball in.

Since D.C. doesn’t charge a jock tax, and Texas has no state tax at all, “you’re gonna see a lot of happy players in this series,” Steinberg said.

Work-related time accrued across different states, which includes duties like attending team meetings, batting practice, or playing a game is referred to as a “duty day”.

Because some states like California charge particularly high income taxes, teams try to minimize their practices and total duty days in those states, Steinberg said.

“If you were going to practice you may want to practice in your home city. It could be a very costly practice for the players if you’re gonna fly in a day or two early,” he said.

Jock taxes for playoff bonuses are usually added on to the total time already spent in a state during a season according to Ryan Losi, a financial adviser and executive vice president at PIASCIK, an accounting firm.

If the two teams had squared off during the regular season and either state imposed a jock tax, their bonuses for their World Series games would be tacked on to the duty days accumulated for the entire season—the total taxed as a whole and apportioned based on the “duty day” formula.

Team payroll departments plan for total duty days in a state as soon as schedules are released, and apportion for jock taxes throughout the season, Losi told Bloomberg Tax.

“As they’re playing they will try and withhold and remit, but really you don’t have the final numbers until the year is over,” Losi said. “You don’t know if you’re going to go to the playoffs and have extra duty days added to the formula.”