Rep. Jodey Arrington, a self-proclaimed “far-right ideological conservative” with a good relationship with Democrats, will chair the House Budget Committee, giving the Texan a key role in pushing for spending cuts and negotiating a debt-limit deal. 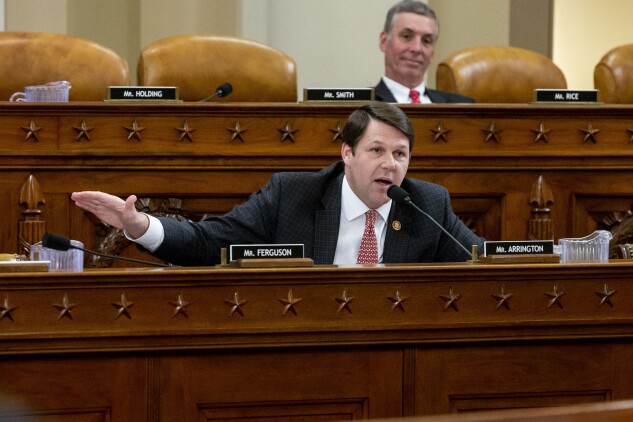 Rep. Jodey Arrington (R-Texas), seen in the front row at a 2019 hearing, is set to lead the House Budget Committee after winning the support of the Republican Steering Committee.
(Photographer: Anna Moneymaker/Bloomberg via Getty Images)

The slot was open because the ranking member from the last Congress, Rep. Jason Smith (R-Mo.), made a successful bid to lead the tax-writing Ways and Means Committee.

Arrington has said Republicans should use an upcoming debt-limit deadline to prompt negotiations on the solvency of major programs such as Social Security and Medicare.

He’s also pushed for statutory limits on discretionary spending, a smaller portion of federal expenditures that Congress allocates each year through appropriations bills.

Ahead of Monday evening’s vote, Arrington said he wants to use the debt limit — which will likely have to be raised or suspended around the middle of the year — to prompt a negotiation on Social Security along the lines of the 1983 negotiations between then-President Ronald Reagan (R) and House Speaker Tip O’Neill (D-Mass.).

“Tip O’Neill and Ronald Reagan came in and they cut a deal,” Arrington told reporters. “I suspect that’s exactly what’s going to happen the next round.”

Republicans would likely come to those negotiations with “a list of eligibility reforms, and we don’t like the tax increases,” Arrington said in a late September phone interview.

Arrington said Monday he plans to contact “each and every authorizer and appropriator” to get input on a budget resolution, which Republicans have said must project a balance within the next 10 years.

The blueprints are used to set top-line spending figures for appropriators and outline the budgetary effects of other policy priorities, though House Republicans and Senate Democrats may struggle to agree to the same resolution.

Arrington pitched himself as a lawmaker who could appeal to conservatives in the House Freedom Caucus while still focusing on bipartisanship.

“I’m a, I would say, far-right ideological conservative. I’m a debt hawk,” Arrington said in the September interview. “And yet I’m a true believer in bipartisanship.”

The Texan also has proposed statutory spending limits on discretionary funds for 10 years, limiting the annual growth to 2% per year. He’s said he’d like to see bigger increases for defense spending than nondefense funds.

An enthusiast for possible big-picture changes to the congressional budget process, Arrington also served on the Joint Select Committee on Budget and Appropriations Process Reform in 2018, a panel that discussed changing budget resolutions to cover two years, rather than one. Its members couldn’t obtain the bipartisan support needed to advance its proposals in a markup.

Arrington, who represents a portion of West Texas around Lubbock and Abilene, wore a tie with a cotton-themed pattern to his presentation to the Steering Committee Monday.

To contact the reporter on this story: in Washington at jfitzpatrick@bgov.com

To contact the editors responsible for this story: at lduggan@bgov.com; at agreilingkeane@bloombergindustry.com