The Manhattan skyline is seen at sunrise from the 86th floor observatory of the Empire State Building on April 3, 2021, in New York City.
Photographer: Angela Weiss/AFP via Getty Images

A pandemic plunge in Manhattan’s real estate tax revenue threatens New York City’s ability to finance everything from schools and hospitals to firefighters and police unless office workers return in force starting this summer, officials are warning.

“We have to bring back the city this year,” Mayor Bill de Blasio said at a briefing late last month to unveil his $98.6 billion budget aimed at creating 400,000 jobs, spending millions on investments, and bringing back tourists. “It’s not optional. This is the recovery moment.”

Workers fled cities last year at the height of the pandemic, triggering a plummet in commercial real estate and rental markets not seen in four decades as office supply soared to record levels. Short-term federal aid has helped, but a sustained sluggish commercial market, which accounts for more than half of the city’s revenue, could create lasting fiscal harm if unreversed quickly.

There’s little room for error with New York City projecting a $12 billion deficit over the next three years with losses across the city’s tax sources, including commercial real estate revenue. Real property tax is the city’s single largest source of tax revenue making up more than half of the city’s revenue.

Stronger-than-expected tax revenue from personal income and sales tax paired with one-time stimulus aid from the Biden administration have helped to stave off immediate short-term budget challenges, but a fiscal crisis still looms.

“New York’s major industry is commercial real estate and its office buildings, and if that industry is significantly impaired, then New York’s economy is in deep trouble,” said Ruth Colp-Haber, president and CEO of Wharton Property Advisors, a real estate consultancy.

Kathryn Wylde, president and CEO of the business group Partnership for New York City, whose members include JPMorgan Chase & Co. and Goldman Sachs Group Inc., warned: “There is a potential fiscal crisis down the road for New York City if commercial values don’t stabilize. The next mayor [De Blasio’s second term ends in 2022] is going to inherit the challenge of an economic recovery without the benefit of deep federal subsidies.”

Business districts of dense cities like New York and San Francisco that rely on commercial real estate to drive economic growth have emptied out, leaving surrounding neighborhoods, restaurants, and retailers in tatters. Major U.S. metro areas saw a net decrease in flow into the city, while other suburbs and other smaller cities saw net gains. 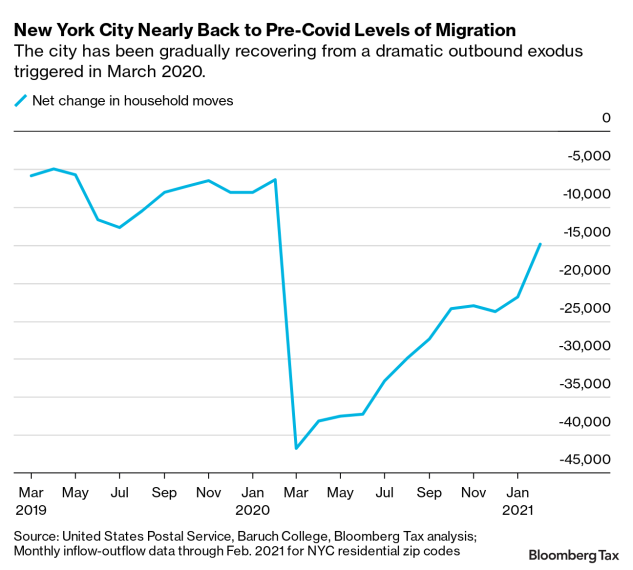 Major companies are eyeing a return to the office in the coming months as more and more New Yorkers get vaccinated.

Goldman Sachs wants to have employees return to its Lower Manhattan headquarters next month. JPMorgan chief Jamie Dimon wants to bring back his workforce in rotations starting in early July. And Ken Griffin’s Citadel is expected to have most of its U.S. employees back in its offices in New York, Chicago, and Greenwich, Conn., by June 1.

But even while firms seek to resume normal business operations much will depend on whether employees will be willing to return to the office as they await to see an improvement in crime —with shootings in March up 77% from last year—and higher vaccination rates citywide.

“Somehow for office workers, they don’t want to die in the last days of the war,” said Colp-Haber.

There are signs that market activity may be improving with an uptick in new leases and the number of tenants active in the market growing in the first quarter, according to real estate firm CBRE. But the amount of office space available in Manhattan is at the highest level in at least 30 years.

The availability rate jumped to 17.2% in the first quarter, according to a report by Savills in April. Much of that was driven by a surge in a sublease space, which reached 22 million square feet, 62% higher than before the pandemic.

“It’s going to be more challenging for the next year in the sense that the reduced economic activity over the past year, even though its picking up, it’s picking up at a lower price point which means that you’ll see less tax revenue reflected going to city government to fund its operations,” said James Whelan, president of the Real Estate Board of New York.

Tax assessors value a building based on the rental income that can be generated after usual expenses. And while companies have largely kept up paying rent to building owners, and financially stressed New Yorkers have been eligible for a mortarium on rent, it’s unclear whether firms will renew leases or tenants will repay owed rents when they get back on their feet.

That could make the next few years increasingly difficult for the city’s budgets with projected widening deficits.

“If values of commercial property are typically down 20%, I don’t see that recovering fast enough to avoid a substantial reduction in tax assessments,” said Wylde.

‘Slow to Bounce Back’

In January, New York City’s finance department took a preemptive step when it began its yearly assessment of property values, predicting a 5.2% decline in tax revenue—the first drop in assessments in almost 25 years—due to anticipated declines in market values of commercial and rental properties.

Those projected slumps are expected to continue through 2025, according to the budget office’s preliminary estimates, reflecting a slow recovery in the commercial real estate market and tax revenues of about an average of 3.3% growth between 2023 through 2035.

“Businesses are closed or operating at a much lower activity than they used to,” said George Sweeting, deputy director for the New York City Independent Budget Office. “The expectation is that the amount of rent that can be relied on in the future may go down if this level of reduced activity continues or if firms that rent office space decided they need less space.”

Those numbers are unlikely to improve significantly when a final tax roll is completed later this month ahead of the start of the 2022 fiscal year on July 1. New York City Office of Management and Budget Director Jacques Jira told reporters at the end of April that the agency’s property tax declines “remains more or less the same” as the preliminary forecast in January.

“There are a lot of concerns about what is the long-term impact on the commercial real estate market with regards to office rents and vacancies—and some of the signs at the current moment are not promising,” said Ana Champeny, director of city studies for the Citizens Budget Commission, a nonprofit fiscal monitoring group.

“The city has a longer-term problem,” she said, “because the property tax is going to be slow to bounce back.”

Less than 16% of workers in the New York metropolitan area were back at their desks as of April 21, according to data from Kastle Systems. But a survey by the Partnership for New York City, shows that nearly half of Manhattan’s office workers are expected back by September.

Jennifer Adger, 41, who works in the crisis management industry, left her Brooklyn apartment to buy a home in the Catskills after the first wave of the pandemic hit the city. She’s unsure whether to move back full time.

“It’s really going to be about letting my job take the lead,” said Adger, who hopes to share a lease with friends to maintain her footprint in the city while keeping her home upstate.

“If New York comes back, I think it’s going to be harder and harder for me not to want to have a substantial presence in the city,” she said. “I don’t want to just Airbnb and feel like a guest in a town that I have lived in for 18 years and still consider myself to be a New Yorker.”

Roberto Rodriguez, 44, a director at a financial services advisory firm, returned to the city last month to see things firsthand after letting the lease expire on his Brooklyn apartment last October.

“It seemed a lot further off than I anticipated,” said Rodriguez, who is awaiting details from his employer on what a return to the New York office may look like. But he’s hoping he can create a bicoastal life between the city and his new home in Henderson, Nevada.

“Before you didn’t have a choice. You had to pay exorbitant rents and higher cost of living because the expectation was you were there,” said Rodriguez. “Your job and your industry were in New York. You had to be there. But now in this new world, people have to ask themselves: ‘Is this a smart economic move for me going forward?’”