New York moved toward creating the nation’s second-largest market for legal marijuana when the state Legislature passed Tuesday a bill that would impose special pot taxes and allow the licensing of dispensaries.

The measure (S.854A /A.1248A) would allow cannabis storefronts to open as soon as next year, and would let home growers start cultivating their own pot. It would limit the number of licenses for large corporations, and impose sales and excise taxes that are estimated to eventually bring in about $350 million a year.

The legislation would set in motion automatic expungement of records for people with previous convictions for activities that would no longer be criminalized when marijuana is legalized for use by adults 21 and older.

The Senate voted for the measure 40-23. The Assembly cleared the bill by a vote of 100-49. Both chambers’ votes were largely along party lines.

“There were many important aspects of this legislation that needed to be addressed correctly — especially the racial disparities that have plagued our state’s response to marijuana use and distribution as well as ensuring public safety — and I am proud that through strong collaboration, we have reached the finish line,” state Senate Majority Leader (D) said in a news release.

Governor (D) has said he will sign the bill, which he negotiated with lawmakers in a handshake deal last week.

Once New York’s program is fully rolled out, it’s anticipated to generate tens of thousands of jobs and about $4.2 billion in sales, surpassing Washington state and trailing only California, which had about $4.4 billion in sales last year.

Several lawmakers in both houses, mainly Republicans, brought up concerns with people under the influence of marijuana driving or going to work and using heavy machinery.

Mattera, who voted “no” on the bill, also expressed concern over the dangers of drug use, particularly for youth. He described experiencing this problem in his own family, and called marijuana a “gateway” drug.

“This is a disaster waiting to happen,” he said.

The legislation includes two kinds of new taxes: a 13% sales tax, with the money raised divided between the state (9%) and localities (4%), plus a distributor excise tax of as much as 3 cents per milligram of THC, the active ingredient in cannabis, using a sliding scale based on the type of product and its potency.

Tax revenue would be used to run and oversee the state cannabis program, with the remaining money divided between programs that try to help people rebuild their lives after marijuana possession arrests, as well as their communities. The revenue would also go to education and drug treatment in the state.

Cities, towns, and villages would have until the end of this year to opt out from having dispensaries and pot cafes in their communities. 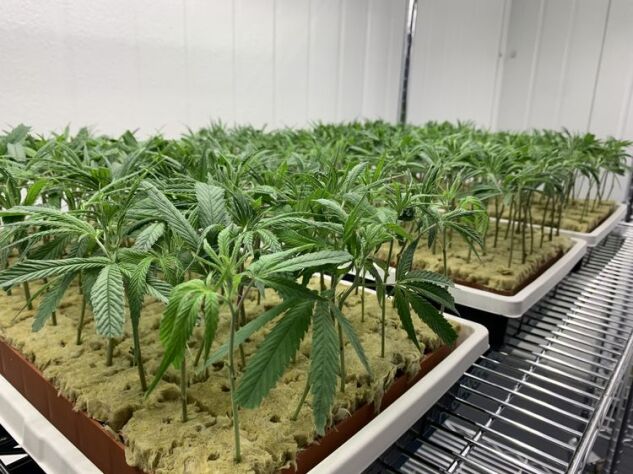 Up to 3 ounces of cannabis and 24 grams of cannabis concentrate would be legally permitted for personal possession outside of the home. Up to 5 pounds of cannabis will be allowed in a private residence, as long as it’s in a secure location out of the reach of those under age 21, according to the bill.

The proposal allows for the personal cultivation of cannabis, with an adult 21 or older permitted to have up to three mature plants and three immature plants. Per household, the limit would be six of each kind of plant. Home cultivation would become legal in six months for medical marijuana patients and legal for others no later than 18 months after the first shops open, dependent upon state regulations.

The legislation also would expand eligibility for medical marijuana.

The bill would allow pot delivery services, with each licensee able to have the equivalent of up to 25 full-time employees. And it would allow for on-site pot consumption, as long as the cannabis cafes aren’t within 500 feet of a school, or 200 feet from a house of worship.

A single company wouldn’t be allowed to handle all parts of a recreational transaction — cultivation, processing, distributing, and dispensing — with the exception of micro businesses. A cultivator or processor would be barred from having a direct or indirect financial interest in a retail dispensary.

A state Cannabis Control Board and Office of Cannabis Management would be required to take small businesses into consideration and prioritize “social and economic equity” applicants from communities disproportionately impacted when marijuana was illegal. Priority for licenses also would go to those who make less than 80% of their county’s median income, and those convicted in the past of a marijuana-related offense.

The bill sets a goal of allocating half of the adult-use licenses to a minority- or woman-owned business, distressed farmers, service-disabled veterans, or “social and economic equity” applicants.

The state would also create business incubator programs for social equity applicants, make low- and zero-interest loans available to them, and would be permitted to waive their licensing fees, according to the bill.

“Passage of this bill will mean not just legalizing marijuana, but investing in education and our communities, and bring to an end decades of disproportionately targeting people of color under state and federal drug laws,” Assembly Speaker (D) said in a news release. “Now, this legal industry will create jobs across our state, including for those who have had their lives upended by years of unjust drug laws.”

Companies that already have a medical license in New York could have a slight advantage over newcomers when the state opens up to recreational use. There are 10, five of which are among the U.S.’s largest multi-state operators; Acreage Holdings, Columbia Care, Cresco Labs, Curaleaf, and Green Thumb Industries.

To contact the reporter on this story:
in Arlington at kclukey@bloomberg.net

To contact the editors responsible for this story:
at krizzo5@bloomberg.net