Team co-owners Tanya and Dan Snyder announced the Washington Football Team's name change to the Washington Commanders at FedExField last week in Landover, Maryland. Though Maryland has legalized sports betting, it's yet to be rolled out more than a year later.
Photographer: Rob Carr/Getty Images

It’s been 14 months and counting since betting ballot initiatives passed in those two states, and eight months since Florida Gov. Ron DeSantis (R) signed a law legalizing betting. While some in-person betting options are available, a combination of regulatory and legal hurdles has delayed more lucrative online betting—which makes up 86% of wagers in places where both are legal according to the American Gaming Association, the industry lobby.

“There isn’t really such thing as an average state when it comes to sports betting,” said Casey Clark, senior vice president of strategic communications at the association. “It depends on what a state’s constitution requires. Sometimes its tribal approval, sometimes a ballot vote, in some places it’s as simple as passing a law, though that isn’t always simple.”

It takes the average state a little over eight months to take its first bets once it legalizes sports betting, according to data compiled by Bloomberg Tax, though there are outliers: New Jersey, for example, launched just three days after legalizing, while it took Tennessee more than 17 months.

“Some states may take a shorter amount of time if their statute directs regulators to follow other states’ licensure models,” said Marie Jones a gaming attorney and partner at Fox Rothschild LLP. “Other states may take longer if their legislation requires their own licensing process, which sets out a further start date.”

In most states, a gaming commission prepares for launch. Such a commission administers and governs regulatory infrastructure for the brand-new apps and casinos. In some states, like Maryland, it is required to work with several other agencies, which can lead to delays. 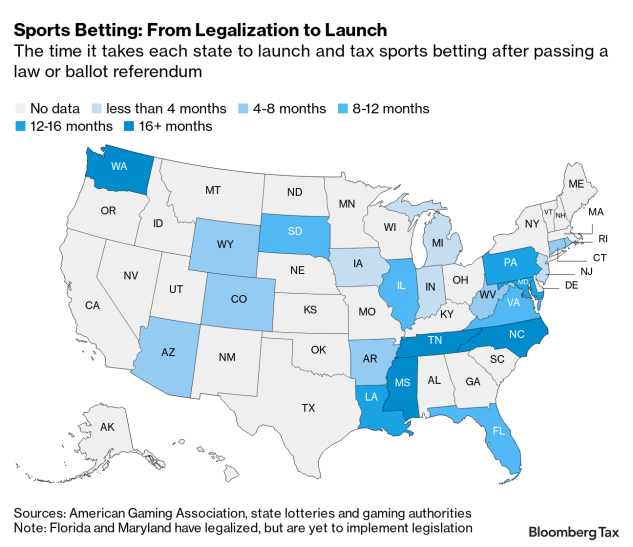 After facing criticism from Gov. Larry Hogan (R) over a lengthy application review process, Maryland’s gaming authorities had targeted an online launch in time for the Super Bowl, one of America’s biggest sports betting days. Delays have now pushed the start date back indefinitely.

Oversight in Maryland is shared by the Sports Wagering Application Review Commission and State Lottery and Gaming Control Agency.

“In other jurisdictions they might not have a situation like that,” said John Martin, director of the Lottery and Gaming Control Agency. “It requires another level of administrative process and oversight, as we have to transfer things back and forth.”

After the state launched brick-and-mortar betting at five casinos in December 2021—which in one month generated $469,297 from a 15% tax—getting online sports betting off the ground is the next the step.

“We are moving quickly to look at the mobile landscape, but we have to put together regulations and get those approved by a series of internal checks and balances first,” Martin said. “The process has just begun. I expect we’ll start taking applications in the spring, review them in the winter and hopefully get online going by Fall 2022.”

The state Department of Legislative services projects $19 million in added annual tax revenue once sports betting if fully under way.

Louisiana’s online market finally went live January 28, about 14 months after voters in 55 out of the state’s 64 parishes voted to expand the industry to mobile gambling.

One of the main reasons it took so long is parish-by-parish legality required state officials to electronically ringfence the nine jurisdictions that didn’t legalize, blocking their online access. Ronnie Johns, chairman of the Louisiana Gaming Control Board, called the situation one of the state’s “biggest challenges.”

Louisiana has allowed in-person betting since late October, but the $1 million in taxes it has generated so far puts it far behind the $30 million annual pace projected by the state legislative fiscal office.

Before operators like DraftKings and FanDuel were greenlighted, they were subjected to extensive background checks by the Louisiana State Police, which is still evaluating up to 14 more operators, according to Johns.

“Compliance and background checks are going smoothly, they just take time and paperwork,” Johns said. “It’s a time-consuming effort to get the manpower for 20 licenses.”

The future of sports betting in Florida remains in question.

After taking online bets for about a month, the Florida market came to a halt in December 2021, after a federal appeals court declined to stay a ruling invalidating the state’s agreement with the Seminole Tribe. An alternative path to bring betting online fell short Feb. 1, after FanDuel and DraftKings failed to collect enough signatures to get it onto the November ballot.

Florida Education Champions, the political committee dedicated to the ballot initiative, said in a statement that its effort “ran into some serious challenges, but most of all the COVID surge decimated our operations and ability to collect in-person signatures.”

Sports betting passed in May 2021, when the legislature updated its tribal gaming compact to give the Hard Rock Casino-partnered Seminoles sole control of the online market. But a few months later, U.S. District Court Judge Dabney Friedrich overturned the law after multiple casinos sued, alleging it violated federal law and would have a “significant and potentially devastating” impact on their business.

Florida, the most populous state to have passed sports betting thus far, is one of several places where gaming law changes require approval from local Native American tribes.

Once a tribe and state agree to a new compact, the federal Department of the Interior has 45 days to review whether or not it violates the Indian Gaming Regulatory Act.

The extra step can delay launches, as it did last year in Connecticut.

“In these tribal states, their compacts or agreements with the government dictate what they have to do,” Clark said. “Being subject to rigorous approval can create a very complicated puzzle.”

Florida may eventually become the leader in sports betting delays. Florida Education Champions can’t attempt another ballot initiative until at least 2024, according to Christina Johnson, a spokeswoman for the group.