Contentious economic development incentives lawmakers and the White House are pitching as an answer to the nation’s economic and social ills are structurally unable to help fix those problems—and may even exacerbate them—critics say.

Opportunity zones, originally a bipartisan proposal from Sens. Tim Scott (R-S.C.) and Cory Booker (D-N.J.), are meant to lift struggling neighborhoods out of poverty by luring investors with tax breaks. President Donald Trump has repeatedly touted the tax incentives as one of his administration’s major wins since they were enacted in the 2017 tax code overhaul.

“I got criminal justice done, I got opportunity zones,” Trump said during a recent interview with Axios, weeks after tweeting something similar. “I did more for the Black community than anybody with the possible exception of Abraham Lincoln, whether you like it or not.”

Trump is making opportunity zones a prominent part of his reelection campaign: His second-term agenda includes an expansion of opportunity zones, and both Trump and Scott brought them up during the Republican National Convention.

But economic development, finance, and tax professionals say design flaws may prevent the policy from helping residents in low-income and minority communities and that, if it isn’t changed, the tax breaks risk worsening racial inequality by rewarding the wealthy for investments that may displace low-income residents.

“We see development occurring in the urban centers today, but the people who are doing the building and getting the benefits do not look like us,” said John Harmon, CEO of the African American Chamber of Commerce of New Jersey, and former chairman of the National Black Chamber of Commerce.

Proponents of the incentives describe them as a way to move money from assets that don’t have a social benefit into investments that do. The authors of the legislation let state governments choose the zones for tax-advantaged investments of these profits, thinking they would be best equipped to know which areas would be not only in need of investor attention, but most likely to attract it.

Investors can delay and—depending on how long the investment is held—reduce capital gains taxes by putting proceeds into “opportunity funds” set up to finance projects in the designated areas. If the money remains invested for 10 years, the growth in value of the project financed by the fund isn’t subject to tax.

An Aug. 24 White House report estimated that funds raised between $33 billion and $93 billion by the end of 2019, a range that has raised some doubts.

Holders of assets generating capital gains tend to be wealthy, and Black and Hispanic households tend to have far lower wealth than white ones. So that money is likely to come from outsiders who may not have connections with the communities they are investing in. 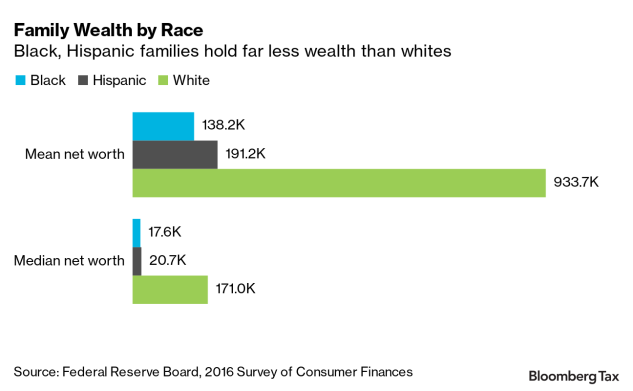 Such connections matter, according to Napoleon Wallace, a former North Carolina Commerce Dept. official who oversaw the state’s zone designations. Unless residents of the areas targeted for opportunity zone developments have some involvement, they are at risk of displacement, he said.

“It is very hard for folks that don’t have access to capital to intersect or interact with folks that do have tremendous access to capital,” said Wallace, a co-founder of Partners in Equity, which helps small business owners afford their own real estate and is supplemented by opportunity zone funding.

The Alabama news outlet AL.com and the Center for Public Integrity, for instance, found that an opportunity fund financed apartment building in Birmingham would offer units at rents well above what is affordable for the median residents of the city’s zones.

Brett Theodos, a senior fellow at the Urban Institute, recently co-authored a report highlighting how the structure of the tax incentives pose a barrier for more philanthropic investors.

The tax rewards depend on profits rather than job creation or wages—a challenge for developers more interested in helping low-income, minority neighborhoods prosper—and the requirement that investors hold onto their stakes for at least a decade to get the biggest benefit means they will demand high returns that social-impact projects often can’t meet, the report noted.
“There are examples of Black developers especially having put their own capital gains into this program, and used them and done compelling and interesting projects,” Theodos said.

The report, for instance, cited an opportunity fund launched by the investor David Gross that has attracted a handful of NBA players and invests in real estate with a focus on urban areas.

“That said,” Theodos continued, “the thought that the benefits to Black communities are robust or even at some level measurable is not likely under this program so far.”

Some economic development experts have long warned that the structure of the opportunity zone policy—its reliance on equity financing, and its capital deployment, investment value, and holding-period requirements, for instance—better suits it for real estate and startups rather than existing small businesses.

A policy that is better suited for financing new things, critics say, is a policy that can accelerate gentrification, which is all the more troubling given that existing minority-owned businesses have closed at disproportionately high rates during the pandemic.

Critics worry that, given the geographic limits and need for a high return on investment, the incentives will simply subsidize luxury real estate that will ultimately drive out existing renters. Funds with at least a partial focus on operating businesses, as opposed to real estate, have also raised just 3.7% of the money raked in by several hundred funds that have responded to a rolling survey by the firm Novogradac & Co. LLP.

Proponents say that imbalance of real estate investments versus operating businesses will begin leveling out since IRS in December issued final rules that provide business financiers with more certainty. They also cite the debt small businesses are taking on to stay afloat through the pandemic, and say equity-based opportunity fund financing is a better alternative to more loans.

The equity-based nature of the policy “is really what makes opportunity zones special,” Daniel Kowalski, counselor to Treasury Secretary Steven Mnuchin, said during a July conference.

The policy, he added, “is looking to provide equity in communities that have been not invested in or disinvested in for generations.”

Critics also have long pointed to the leeway the tax law gave states in selecting opportunity zones as a problem, citing a trendy Los Angeles arts district, swaths of already gentrifying Brooklyn, and much of downtown Portland, Ore., as egregious examples of designated zones that don’t appear to warrant the tax-advantaged investment.

Recent studies have found that, ahead of their designation, chosen tracts showed signs of faster gentrification than those that weren’t picked.

Because the incentives are based on return—and, as many investors and advisers put it, the tax breaks don’t make a bad deal good, but make a good deal great—experts have warned the draw of already up-and-coming neighborhoods makes it hard for truly distressed areas to compete.

Some cities have long been pushing for a year or more to swap or add tracts for a variety of reasons, including to to fix clerical errors that resulted in the designation of unusable zones or zones made up of college campuses and to add census tracts that could use more attention than those that were designated. This is something Scott said he was open to earlier this year.

“What is the old expression?” said Bill McGrail, a retired investment banker who has been pushing to swap opportunity zone tracts in Banning, Calif., on behalf of a landowner who was seeking to sell property in a tract that didn’t get selected. “That’s why God put erasers on pencils.”

While opportunity zones started out as a bipartisan idea, Republicans and Democrats are split on what to do next.

Lawmakers from both parties support legislation to require Treasury to provide data on economic activity in the zones, but disagree over how much investor information should be disclosed. Sen. Ron Wyden (D-Ore.), for instance, wants more detailed public disclosures of investor activity, while lawmakers like Scott want to grant investors more privacy.

The White House declined to elaborate on Trump’s campaign pledge to expand opportunity zones, but Scott is pushing for a two-year extension of the deadline for investors to shield 15% of their original gains from tax.

“This will allow those using the incentives to weather the storm and give our communities more time to harness the potential of opportunity zones,” Scott said during the July conference.

In the House, Republicans proposed (H.R. 6513) extending the deadline for investors to defer their capital gains taxes, while a bipartisan bill (H.R. 6529) would make small businesses hit by Covid-19 eligible for opportunity fund financing..

Biden, as part of a racial economic equity plan released in July, said he would offer incentives to investors who partner with nonprofits or community organizations to produce a strategy focused on creating jobs for low-income residents. He also pledged to require more data collection on opportunity zone investments and order a Treasury Department review to determine if the incentives are spurring projects with economic, social, and environmental benefits.

“I thought they were poorly designed for the challenges they hoped to meet in 2018,” said Jennifer Vasiloff, chief external affairs officer at the Opportunity Finance network, an association of CDFIs. “Now, with what’s happened in 2020 and what’s on the horizon, designing a community development strategy around trying to capture some of the capital gains liability of wealthy investors is not on point.”

To contact the editors responsible for this story: at pambrosio@bloombergtax.com; at jdunbar@bloomberglaw.com