House Speaker expressed optimism about negotiations with the White House on a new stimulus, saying that President ’s Covid-19 diagnosis might change the tenor of the talks by emphasizing the seriousness of the pandemic.

Pelosi and Treasury Secretary exchanged proposals on a virus relief package Thursday night and spoke by telephone on Friday afternoon for 65 minutes. The talks are continuing, Pelosi’s office said.

Also striking an optimist note was Senate Majority Leader , who has been dismissive of proposals from Democrats for a $2.2 trillion stimulus plan and has left most of the negotiatings to the White House.

“I think we’re closer to getting an outcome,” McConnell said at an event Friday in Kentucky.

Pelosi in a letter Friday to House Democrat said there remain five areas of “significant disagreement” with the White House that were topics in her call with Mnuchin.

They are mostly the same issues that have stood in the way of a deal for weeks: funding for unemployment insurance; money for schools and state and local governments; amounts for the Child Tax Credit and Earned Income Tax Credit; restrictions on use of testing money; and $44 billion gap on appropriated discretionary funding.

Democrats have accused Senate Republicans and the White House of not recognizing the extent of damage that the coronavirus pandemic has caused and how big a threat remains. 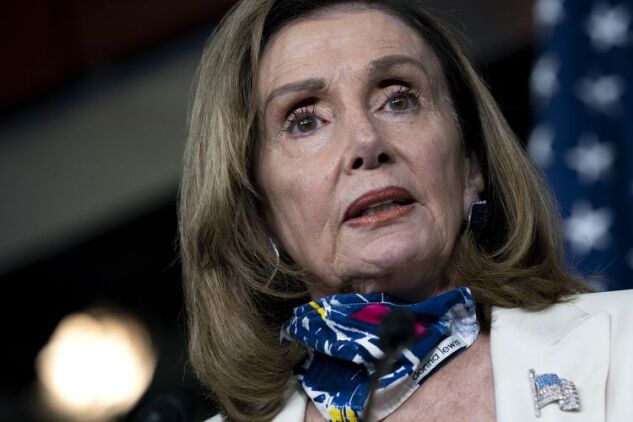 “This kind of changes the dynamic,” Pelosi said on MSNBC Friday of Trump’s diagnosis. “Here, they see the reality of what we have been saying all along.”

The stimulus negotiations have made some halting progress over the past two months, but the two sides remain far apart on how much of a boost to provide and where it should be directed. Democrats in the House on Thursday passed a $2.2 trillion package -- down from the $3.4 million plan they passed in May -- as their offer in the latest talks. Mnuchin has proposed a plan of about $1.6 trillion.

Pelosi is under increasing pressure from her swing-district moderate members to get a deal quickly, and 18 of them voted against the Democratic package on Thursday in order to urge bipartisan talks. The leaders of the Blue Dog Coalition are preparing to send a letter to the speaker calling for negotiations through the weekend to get a deal and keep Congress in town.

“Now that both the White House and House Democrats have put forward serious proposals, we urge you to continue the discussions over the weekend until a deal is achieved,” the letter states.

The negotiations are taking place amid signs the U.S. economy is struggling to recover from pandemic-induced shutdowns. Job gains slowed in September and many Americans quit looking for work, suggesting the economic recovery is down-shifting. Americans’ incomes fell in August by the most in three months after the government’s supplemental unemployment benefits expired, the Commerce Department reported Thursday.

In one sign of the how the economic pressure may be affecting the negotiations, Pelosi said Friday that she would support an extension of aid for airlines either as part of a broader package or as a standalone bill. She previously had resisted any piecemeal approach to the stimulus.

House Majority Leader said the lawmakers could move quickly to provide the airline aid. But the House went on recess Friday without acting on a bill to provide the aid. It still could be taken up next week if no lawmaker objects.

and have gone ahead with job cuts, trimming a total of 32,000 workers as of Thursday. Both carriers, however, said they would rescind the layoffs if aid was forthcoming with the next few days.

Pelosi’s comments on a possible shift in the talks prompted U.S. stocks to pare loses. After falling as much as 1.2% earlier Friday, the S&P 500 Index’s decline was cut almost in half after she spoke.

Some Democrats and Republicans remained skeptical.

“I don’t think Trump being diagnosed will change a whole lot when it comes to Republicans being willing to address this crisis,” Florida Democratic Representative said.

She said she will be hopeful only when Congress is called in to vote on a deal.

Oklahoma GOP Representative said Pelosi “overplayed her hand and drove Republicans into a corner” by making demands for another massive stimulus.

He said the chances of a deal would be completely hopeless if not for recent announcements of layoffs by airlines and companies in other industries. “Surely they can come up with something,” Lucas said.

Republican Representative of North Carolina said he was “extremely frustrated with both sides,” but that he hoped Trump’s illness would refocus both parties on fighting the virus instead of the upcoming election.

Time to strike a deal is running short, with the presidential and congressional elections 32 days away and Congress expected to be on recess beforehand for the final leg of the campaign.

The House left for recess Friday midday, with lawmakers on call to return if there is a deal to vote on. Private economists have already cut their growth forecasts for the fourth quarter after the failure to find a compromise on another fiscal package.