House Speaker Nancy Pelosi (D-Calif.), speaking in a news conference Aug. 13, has been at the center of talks for coronavirus relief packages.
Photographer: Amanda Andrade-Rhoades/Bloomberg

House Speaker suggested that Democrats might be willing to make more cuts to their stimulus proposal to seal a deal with Republicans and speed Covid-19 relief, then come back after the November elections with additional agenda items.

“We’re willing to cut our bill in half to meet the needs right now,” she said Tuesday at a Politico Playbook event. “We’ll take it up again in January.”

Pelosi’s spokesman later said that she was referring to previous offers to meet Republicans “halfway, not cutting our bill in half.” 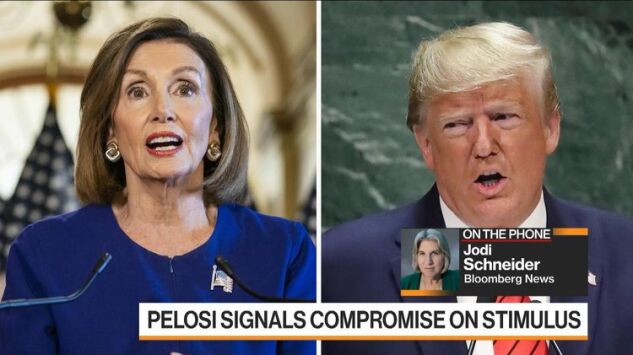 WATCH: Is Pelosi willing to make more cuts to her stimulus plan to strike a deal with Republicans?
(Source: Bloomberg)

But both sides in the stalemate over a stimulus bill appeared to be probing for openings for a break that could restart negotiations. Treasury Secretary and Senate Majority Leader said Pelosi’s decision to break out $25 billion in funding for the Postal Service from the original Democratic relief plan as an opening for talks.

That “could open the opportunity for discussion about something smaller than what the speaker and the Democratic Senate leader were insisting on at the point of impasse,” McConnell said in an interview with the Louisville Courier Journal.

He added that the Senate was unlikely to take up the Democrats’ post office bill, which the House is set to pass Saturday.

Pelosi said she’s eager to get a stimulus package through Congress before lawmakers next month have to take up a bill needed to keep the government running when the new fiscal year starts Oct. 1.

“We have to try to come to that agreement now,” Pelosi said.

The Democratic-controlled House passed a stimulus package worth about $3.5 trillion in May. Senate Republicans offered their own $1 trillion plan at the end of July. But negotiations between Democratic leaders and the White House have been stalled since Aug. 7. Pelosi had previously said Democrats could cut their top-line by $1 trillion if the Republicans moved up by $1 trillion.

The Trump administration has advocated a so-called skinny approach, pushing for a smaller package that addresses areas on which both sides agree. A key sticking point so far has been a Democratic call for almost $1 trillion in aid for state and local authorities, which have seen their finances crippled by the economy’s slump into recession. President says the move would reward what he says are poorly run states.

Mnuchin, one of the two key Republican negotiators along with Chief of Staff , said earlier Tuesday he hoped to meet with Pelosi later in the week to resume talks. He noted that the House is now scheduled to return to session, to take up funding for the Postal Service, which has become embroiled in a political battle ahead of a November election set to feature unprecedented mail-in balloting.

“Since Speaker Pelosi is coming back to look at Postal, hopefully she will be more interested in sitting down,” Mnuchin said on CNBC. 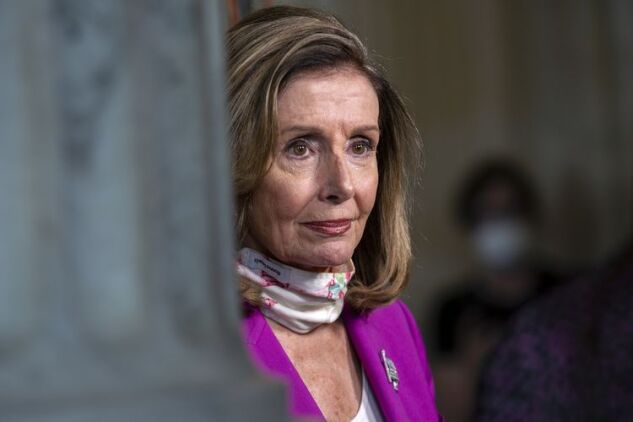 Earlier this month, Senate Democratic leader said that that Democrats do not have the votes on their side to go below $2 trillion for the top-line number for the stimulus.

Senate Republicans are now circulating language on a skinny proposal, expected to feature some money for the Postal Service, supplemental unemployment payments and aid for small businesses and for school reopenings.

Economic and financial-market news hasn’t put pressure on the two sides to accelerate a deal on coronavirus relief. The S&P 500 Index closed at a record high on Tuesday, hours after data showing an unexpectedly strong gain in starts on new home construction in July.

Even so, economists warn that the expiration of supplemental unemployment insurance benefits -- only partially addressed by unilateral, temporary action by Trump -- along with the end of other fiscal support will damage growth.

“It looks likely that the hit to disposable income from fiscal policy in August will only partially reverse in September unless Congress acts soon,” Goldman Sachs Group Inc. economists including wrote in an Aug. 14 note. “While the situation is fluid and unpredictable, all else equal this presents a downside risk to our forecast for growth in Q3.”