House Speaker scaled back her ambitions for Congress‘s next coronavirus stimulus package to focus on additional direct payments to individuals and expanded loans to businesses, possibly leaving an $800 billion infrastructure plan and other Democratic priorities for a later bill.

“While I’m very much in favor of doing what we need to do to meet the needs of clean water, more broadband and the rest of that, that may have to be for a bill beyond this,” Pelosi said Friday on CNBC. “I think right now we need a fourth bipartisan bill -- and I think the bill could be very much like the bill we just passed.”

Pelosi said the $350 billion included the last stimulus for small business to maintain payrolls for two months won’t be sufficient. She said the nation also would need an extension of the expanded unemployment benefits and additional direct payments to middle income individuals.

“So I’d like to go right back and say let’s look at that bill let’s update it for some other things that we need, and again put money in the pockets of the American people,” she said.

“The acceleration of the coronavirus demands that we double down on the downpayment we made in Cares by passing a CARES 2 package,” Pelosi said in her statement. “We must extend and expand this bipartisan legislation to meet the needs of the American people.” 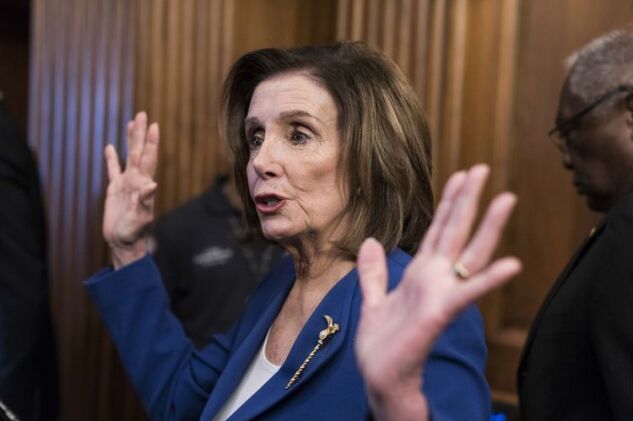 Legislation using the framework of the $2.2 trillion stimulus signed into law last week may have an easier time getting through Congress, which is already operating under the constraints of travel limits and social distancing. Lawmakers aren’t scheduled to be in session until at least April 20.

Senate Majority Leader told the Associated Press in an interview published later Friday that there will be a fourth stimulus bill, but said he and Pelosi have “a little different point of view” about the timing of the next package and what should be included.

McConnell said he’s “not in favor of rushing” into the next phase until taking stock of how the just-passed legislation is working and what corrections are needed. He said the next package “should be more a targeted response to what we got wrong and what we didn’t do enough for — and at the top of the list there would have to be the health care part of it.”

Pelosi and other top Democrats this week had proposed including about $800 billion in new infrastructure spending, including funding for community health centers, access to clean water and broadband, in what’s being referred to as phase four of the response to the coronavirus pandemic that is grinding the economy to a halt.

That has so far been met with resistance from House and Senate Republicans even though President this week called for a $2 trillion infrastructure package. GOP leaders also have cautioned against moving on another round of stimulus until the impact of the three packages already signed into law can be assessed.

Representative of Arizona, chairman of the conservative House Freedom Caucus, along with Republican Study Committee Chairman of Louisiana, and 20 other Republicans, wrote to Trump Friday advising, “caution in considering an additional round of spending outside of the regular process before we have seen the results of the previous three rounds of spending,”

Another key hurdle for infrastructure is figuring out how to pay for it. Neither Trump nor the Democrats have come up with a proposal, although there have been back-room negotiations for months. Pelosi said Thursday that discussions on an infrastructure proposal between Treasury Secretary and Ways and Means Chairman would be accelerating.

Pelosi said communities affected by the health and economic crisis “can’t afford to wait” on the additional relief that will be needed. Even amid the urgency of the virus response, Pelosi promised to continue working “on an infrastructure package for recovery that addresses some of the critical impacts and vulnerabilities in America that have been laid bare by the coronavirus.”

Republican Senator of Missouri this week also said the Senate should focus the next bill on tweaking the stimulus measure already passed. He also raised concerns about the cost of an infrastructure plan, speaking during a BakerHostelter webinar on Thursday.

“I am sure you can argue that we could easily do $1 trillion worth of infrastructure in our country that would be beneficial to our economy in the long run,” Blunt said. “But at some point we have to think about what obligation do we have to keep our government debt at a level that it doesn’t jeopardize the future.”

(Updates with McConnell remarks in sixth and seventh paragraph)