Then-Ways and Means Committee Chairman Kevin Brady (R-Texas) talked to reporters during a Nov. 2, 2017 news conference, the day that House Republicans released their tax overhaul bill. Simplifying the tax code was one of the primary goals of the policy changes.
Photographer: Andrew Harrer/Bloomberg

Republicans touted a postcard-sized individual tax form as they tried to sell the 2017 tax overhaul to the public—that vision was short-lived.

The IRS ditched the smaller Form 1040 after one filing season, bending to pressure from outside groups and tax professionals who complained it created unnecessary complications.

“The postcard was a mess,” said Ryan Ellis, a conservative tax lobbyist who also owns and operates a tax preparation service in the Washington, D.C. area.

Before 2018, the 1040 form was the size of two full sheets of paper. To create a smaller tax filing form, the Treasury Department moved some lines for reporting additional income, credits, and other deductions to six new accompanying schedules.

When the IRS released the smaller individual income tax return form in June 2018, Treasury Secretary Steven Mnuchin touted it as delivering on the Trump administration’s promise to make it easier for Americans to file their taxes.

“The new, postcard-size Form 1040 is designed to simplify and expedite filing tax returns, providing much-needed relief to hardworking taxpayers,” Mnuchin said in a statement the day the form was released. 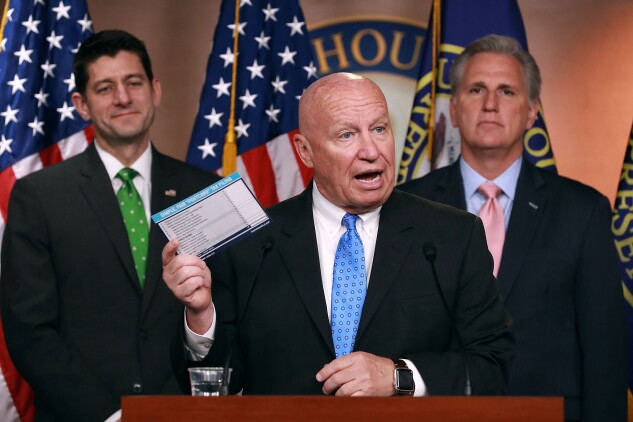 Rep. Kevin Brady (R-Texas) holds up a sample tax form during an April 2018 press conference at the U.S. Capitol in Washington. Republicans touted the smaller tax form as a symbol of a simpler tax code, but the IRS abandoned the format after one year.
Photographer: Chip Somodevilla/Getty Images

But complaints about the changes came quickly: the National Association of Tax Professionals told the IRS in a July 2018 comment letter that it received “overwhelmingly unfavorable” feedback from hundreds of members.

“Treasury Secretary Steven Mnuchin told the media that the administration’s main objective was to simplify the forms,” the association said. “In our opinion, making the form smaller and removing lines only to move them to other schedules does not equate to simplification.”

Scattering information that used to fit on two pages across multiple different attachments required taxpayers and their advisers to toggle back-and-forth and made everything much more confusing, Ellis said.

The IRS heard the concerns and is redesigning the 1040 that people will use to file their 2019 tax returns next year. The agency July 11 unveiled a draft form that looks closer to the Form 1040 that existed prior to 2018 with a two-page baseline form and three schedules, as opposed to six.

“That makes customer interaction a little easier,” he said.

But Steber also noted that the changing forms don’t actually affect that many taxpayers because tax filing “isn’t done as it was generations ago on paper forms spread out on the dining room table.”

More than 90% of people file their tax returns electronically and will never actually interact with a hard copy. But Democratic lawmakers—who have condemned the tax overhaul as a partisan law that mostly helps corporations and the wealthy—are highlighting the demise of the postcard-sized 1040 as another failure of the tax law.

Senate Finance Committee ranking member Ron Wyden (D-Ore.) said the departure from the postcard proves that Republicans failed to deliver on their pledge to simplify the tax code.

“We never believed that it would be a postcard. Never. Not for a moment,” Neal said. “I heard that over and over again during my time and career and I think that makes more for a good photograph than it does for a good policy.”

Ways & Means ranking member Kevin Brady (R-Texas), who chaired the committee during the tax law’s passage and often carried around a mock-up of a tax-filing postcard, was unmoved by the change. When asked what went wrong with the postcard-sized tax form, Brady touted tax code changes that he said have made tax filing easier.

Fewer taxpayers need to itemize due to a higher standard deduction, more than four million taxpayers are benefiting from changes to the alternative minimum tax, and filing for small businesses is easier under the new law, Brady told reporters.

—With assistance from Kelly Zegers, Kaustuv Basu, and Colin Wilhelm in Washington.