Proposals to raise taxes on wealthy Californians are likely to resurface in 2021 now that voters rejected a property tax increase that would have raised as much as $11.5 billion a year.

The failure of Proposition 15 on the Nov. 3 statewide ballot erased the possible influx of property tax revenue that would have funded local governments and schools and taken pressure off lawmakers to increase taxes in other ways.

The proposition, backed by labor unions, would have ended a 42-year-old cap on property tax rates by assessing commercial property at current market value each year. It would have preserved a cap on residential property tax at 1% of the purchase price.

Lawmakers, who this year floated unsuccessful measures to increase income tax rates on Californians who earn more than $1 million a year and impose a new tax of 0.4% on net worth over $30 million for joint tax filers, are poised to try again with those or other tax bills in next year’s session.

The tax increases would protect against looming deficits and soften the disproportionate impact the pandemic is having on low-income Californians, they said.

“Now that Proposition 15 failed we need to sharpen our pencils and get back to work,” Assemblyman Rob Bonta (D), who authored the wealth tax bill, said in an interview. 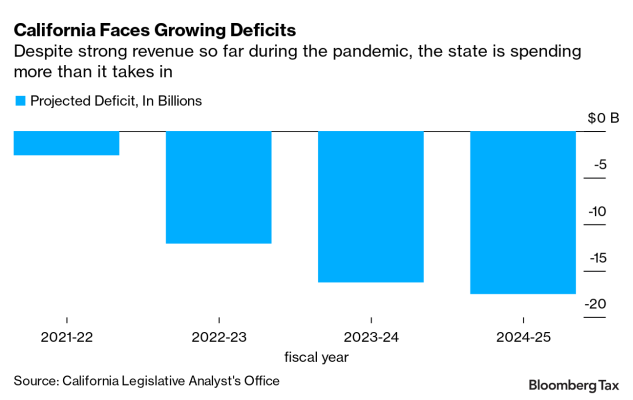 Stronger-than-expected tax revenue during the pandemic from high-income earners and capital gains are creating a one-time windfall of $26 billion in the next year, but budget deficits will continue next year and grow to $17 billion in four years, according to a Nov. 18 fiscal outlook from the Legislative Analyst’s Office. At the same time, low-wage workers will continue to suffer from high unemployment.

Bonta and Assemblyman Miguel Santiago (D), who authored the income tax increase bill, said they are being thoughtful and realistic as they make plans for 2021 legislation. Santiago said the income tax proposal is more modest than President-elect Joe Biden’s (D) proposal to increase tax rates on individuals with incomes above $400,000 a year, and he is open to changes.

“I’m not trying to tax everyone in sight,” Santiago said. “Folks ought to pay their fair share.”

They face an uphill battle with Gov. Gavin Newsom (D), who in September simultaneously endorsed Proposition 15 and said he didn’t support the wealth tax proposals.

“In a global, mobile economy, now is not the time for the kind of state tax increases on income we saw proposed at the end of this legislative session, and I will not sign such proposals into law,” Newsom said at the time.

His office didn’t respond to a request for comment.

Newsom isn’t the only Democratic leader who is skeptical. State Controller Betty T. Yee (D) said in an interview she expects pressure to mount on lawmakers to raise taxes, but elements of the current proposals that would tax unrealized capital gains may not be constitutional.

Even though revenues are stronger than were projected at the beginning of the pandemic, the state still faces a prolonged economic recovery, Yee said. State leaders should look for savings before enacting more taxes, she said.

As controller, Yee sits on the state’s income tax and property tax boards.

The tax-the-wealthy proposals stem from an effort called Commit To Equity, backed by the California Federation of Teachers, Patriotic Millionaires, and other labor and social justice groups.

If lawmakers do consider the increases, they still must weigh possible negative impacts to the economy, Deputy Legislative Analyst Brian Uhler said at a Nov. 18 news briefing.

“The fact that we are currently experiencing the kind of a bifurcated recession that we are doesn’t really change anything about the fact that you face those tradeoffs,” he said.

Higher tax rates on the wealthy aren’t likely to harm the state’s economy, said Chris Hoene, executive director of the nonpartisan California Budget and Policy Center. “The ways they are doing well wouldn’t be harmed by higher marginal tax rates,” he said.

Californians have supported some higher taxes on the wealthy and may tolerate more, Rob Lapsley, president of the California Business Roundtable, said. The organization represents the state’s largest corporate employers.

San Francisco voters approved a new tax on companies if their chief executives make 100 times more than their median workers, and almost 200 of 260 municipal tax measures passed, he said.

“The question is where is the governor going to lead?” Lapsley said. “Is he going to engage in a discussion on this?”

Polls conducted by the Public Policy Institute of California consistently show that a majority of voters support taxes on the wealthy but are concerned about possible unintended consequences, President and Chief Executive Officer Mark Baldassare said in an interview.

Bonta and Santiago said they are willing to ask voters to approve statewide tax increases at the ballot box if the Legislature and governor don’t.

“I don’t dismiss that some of our actions could push the tax base away,” Bonta said. “But we’re only asking those who are doing well to help those who are suffering.”

—With assistance from Emily C. Dooley.