Estate planners are keeping a close eye on the Treasury Department’s agenda, anticipating the possible revival of several regulatory projects shelved by the Trump administration.

Estates, gifts, and trusts were among the regulatory areas significantly cut back under former President Donald Trump—planned projects in that area were reduced to about a quarter of what was included in the Obama administration’s last priority guidance plan.

Some of the regulations, either withdrawn or made a low priority under Trump, would restrict access to tools for reducing estate tax bills, in effect acting as a tax increase without the hurdle of passing tax legislation in an evenly divided Senate. And, the changes would complement the priorities President Joe Biden campaigned on, including broadening and raising the estate tax.

“You might see more inclination to actually press some of these things that came off the priority guidance plan when the Trump administration came to power,” said James F. Hogan, managing director at Andersen Tax LLC.

Treasury and the IRS didn’t return requests for comment on regulatory priorities. A regulatory freeze has remained in effect since the start of Biden’s administration, which has focused in the first several months on delivering pandemic relief to Americans. At the same time, many of the individuals recently appointed to key roles at Treasury’s Office of Tax Policy, where tax regulations are written, are still settling in.

Estate planners are particularly interested in whether the new administration revives a project to limit the use of valuation discounts that reduce the value of assets held in closely-held family businesses for estate and gift tax purposes.

The discounts are typically applied to compensate for the lack of marketability and control that can make the assets harder to sell. A 2016 IRS proposal (REG-163113-02) sought to place limitations on these discounts to stem perceived abuses, but they were later withdrawn by the Trump administration—a move heralded by trade groups and Republican lawmakers who opposed the regulations for being overly broad.

Beth Shapiro Kaufman, a member in the Washington office of Caplin & Drysdale Chartered, said she could see the Biden administration proposing a more tailored version of the rules. Kaufman formerly worked as associate tax legislative counsel in Treasury’s Office of Tax Policy.

Mark Mazur, who was the assistant secretary for tax policy at the end of President Barack Obama’s term, is currently running the Office of Tax Policy until Lily Batchelder—announced Thursday as the nominee for his old job—is confirmed. Mazur defended the valuation discount project in an interview several years ago, saying he believed people who didn’t like the estate tax generally were intentionally misreading the intent and scope of the initial rules. 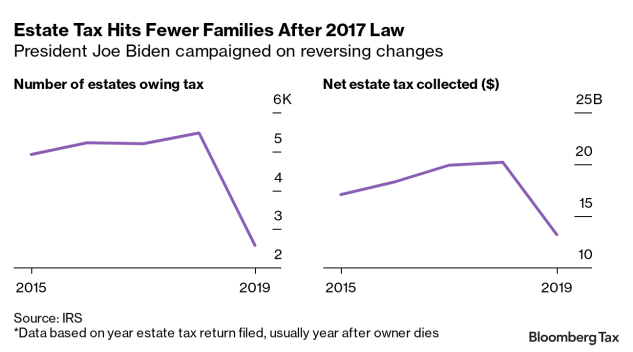 Another project that could be revived under the Biden administration is a rule on valuing promissory notes used in estate and gift tax planning. The project was included on the priority guidance plan in the final years of the Obama administration but was taken off the list during the Trump years.

Wealthy individuals will often sell assets to a trust in exchange for a promissory note, which is essentially an IOU. The trust must repay the principal of the loan and interest, with a minimum rate set by the IRS. If the assets appreciate at a rate faster than the minimum rate, that appreciation passes—free of gift tax—to the trust beneficiaries.

The IRS has been challenging the use of promissory notes when the transaction lacks economic substance, either because the terms of the deal are too good to be real or the parties ignore the terms altogether, said William I. Sanderson, partner at McGuireWoods LLP. And so those rules could have a significant impact, especially on outstanding transactions, if taken up again.

“It would cause a lot of taxpayers to get religion on how they treat some of these intra-family transactions,” Sanderson said.

The Biden administration could also prioritize rules carrying out a 2015 law provision designed to prevent estate executors from reporting a low property value for estate tax purposes while distributing the same property to beneficiaries with a higher value, or basis, which would reduce their capital gains tax bill when they sell it.

The regulations were proposed (REG-127923-15) in 2016 with strict rules for property omitted from estate tax returns. They stayed on the Trump administration’s priority guidance plan but were never made final.

The regulations, however, address a relatively minor problem for the agency, which may limit their impact, said Hogan, who spent decades working at the IRS on estate and gift tax issues.

Increasing funding for the IRS so that it can audit more gift and estate tax returns is another avenue for bringing in more revenue from the rich, without having to pass legislation raising tax rates.

Policymakers on Capitol Hill—especially Democratic lawmakers—have expressed interest in increasing the agency’s budget so that it can audit more high-income individuals and corporations.

Ian Weinstock, a partner at Kostelanetz & Fink LLP, said that would be the most-effective strategy. He doubted the agency’s ability to bring back rules, like the unpopular valuation discount rules, because he said it’s unclear if the IRS had the statutory authority to carry out the changes it was proposing.

He noted the IRS already audits a lot of the estate tax returns because the number of those decreased after the Trump administration’s 2017 tax overhaul doubled the amount wealthy individuals can transfer to their heirs without paying estate tax at death. But there’s a lot of room to increase audits on gift tax and fiduciary income tax returns, he said.

“There are clients out there, lots and lots of people out there, who are basically playing an audit lottery,” Weinstock said.