Rural electric cooperatives could end up losing their treasured tax-exempt status if they receive disaster aid or grant funding from the government.
Photographer: Michelle Gustafson/Bloomberg via Getty Images

Rural electric cooperatives are slowing down construction of broadband networks and renewable energy infrastructure and taking on debt as a 2017 tax law change threatens their traditional tax exemption.

The potential loss of tax-exempt status is also pushing the cooperatives—which were created in the 1930s to cheaply deliver power to far-flung farms and villages—toward debt financing, leaving them with hefty interest payments, while a legislative fix remains in limbo. Lawmakers have until the end of the year to pass a fix, or many co-ops will end up owing taxes they’ve never owed before for the 2019 year.

“We see it as an economic development issue, as an existential issue,” said Tim Johnson, CEO of Otsego Electric Cooperative Inc. in Hartwick, N.Y. “Explaining to our members that we’re going to become taxable because of the tax law is going to be a tough conversation.”

Prior to the 2017 law’s enactment, contributions paid by a government or civic group to a corporation were characterized as capital contributions, which weren’t included in those businesses’ incomes. But lawmakers, seeking to end federal tax-free treatment of state incentives, amended tax code Section 118 so that such payments cannot be excluded from income as “contributions to capital.”

Rural electric cooperatives can remain tax-exempt under Section 501(c)(12) as long as they derive at least 85% of their income from their paying members, and no more than 15% from other sources. But with government payments now part of the income equation, they stand to lose their coveted tax-exempt status by receiving disaster aid or grant funding.

“We’re well aware that we’re going to exceed our threshold for this year,” said Johnson, adding that Otsego hadn’t heard of the problem until a CPA notified them in February of 2018. “The train had already left the station when the tax bill arrived.”

The cooperative won nearly $4.3 million in federal funds over the next decade to extend broadband to over a thousand rural homes and businesses, the Federal Communications Commission announced in July.

To avoid tripping up their 85-15 test, Otsego has slowed down construction—but to a point, as they are contractually obligated to follow through on their broadband project, Johnson said. So, like other co-ops, they have turned to debt for project financing, and found themselves having trouble paying the resulting interest.

Washington Island Electric Cooperative in Wisconsin, meanwhile, could end up owing the government because it received a substantial amount of state disaster aid. The co-op announced in July that it would be receiving hundreds of thousands from the Wisconsin government, following a series of storms and floods.

“That’s three years we could potentially be without our tax-exempt status,” said Robert Cornell, Washington Island’s manager. The co-op, he added, relies on an accounting firm for its financials, and the cost of that service will certainly go up if Washington Island becomes taxable.

In a 2016 appeal to the bulk of his supporters, President Donald Trump promised to help expand rural broadband and has signed two executive orders on the issue. Democrats have attacked him for slow progress. Sen. Elizabeth Warren (D-Mass.), who is running for president, has an $85 billion plan to bring faster broadband to rural areas. 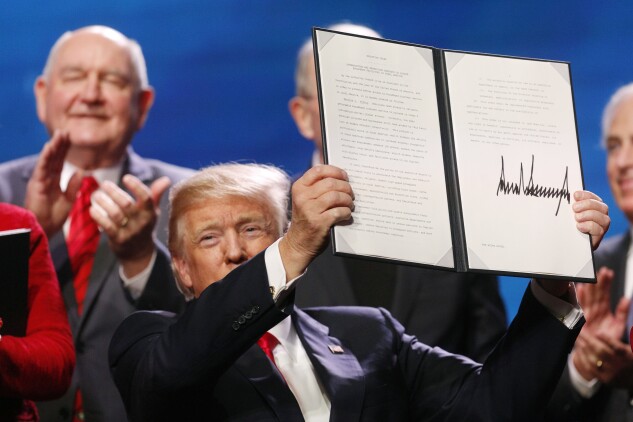 The co-ops aren’t the only ones with skin in the game: They provide farming businesses with connectivity needed for marketing, as well as their day-to-day work.

American farms—29% of which remained without internet access as of 2017, according to a Department of Agriculture report from that year—increasingly use smart technologies and yield data tracking, noted John Kran, national legislative counsel at the Michigan Farm Bureau.

“But you need to have a way to store that data, to analyze that data,” he said. “If you look back at why we created the rural electric cooperative model, it was expected to go that extra mile” to get those in underpopulated areas on the grid, he continued.

The Michigan Farm Bureau, along with the New York Farm Bureau, the Northwest Public Power Association, and the National Rural Electric Cooperative Association (NRECA), lobbied on legislation to fix the issue in the second quarter of this year. All confirmed their support.

A bill (H.R. 2147) introduced by Rep. Terri Sewell (D-Ala.) would modify the definition of income for the co-ops. The legislation has 91 cosponsors. Sen. Rob Portman’s (R-Ohio) companion measure (S.1032) has 18 cosponsors. Both have a mix of Democratic and Republican support, but the route to passage is unclear.

“I think this is bipartisan—the problem is, nobody wants to work with the other side,” said Mark Aeilts, CEO of Barry Electric Cooperative in Cassville, Mo. “It was never the intention that the government hand out with the right hand and then claw back with the left hand.”

The issue doesn’t necessarily warrant a technical correction, but represents an unintended consequence of the 2017 law, according to a Republican aide. The bill doesn’t have a budget score yet, but shouldn’t cost much, the aide said.

Portman’s press secretary, Kevin Smith, wrote in an email that the bill “would be an appropriate candidate for any potential tax package this year.”

Jackie McGuinness, Sewell’s communications director, said her office wants to add it to a package of tax law changes before the end of the year, but doesn’t have a solid vehicle for the bill just yet.

In the meantime, Cornell, of Washington Island in Wisconsin, said the industry is “going to do our damndest” to push lawmakers to pass a fix.

“We’re dealing with the federal government,” he said, “which is always problematic.”