Seattle activists demonstrate in May in favor of legislation to tax Amazon and other large businesses.
Photographer: Jason Redmond/AFP via Getty Images

Large Seattle companies like are in the crosshairs of a new tax the City Council passed Monday targeting the payroll expenses of high salaries with tax rates that escalate based on the number of zeros on the paychecks and the overall size of the payroll.

The narrowly tailored tax is aimed only at the city’s biggest businesses paying the highest salaries. It would spare small businesses and middle- and lower-class residents struggling to get by in a city where housing prices have continued to rise unabated during the Covid-19 pandemic.

The measure passed with a veto-proof majority of 7 to 2 and would bring in $214.3 million in revenue in 2021, which would address the impacts of the pandemic, provide affordable housing, address homelessness, and implement a municipal “green new deal.” It now goes to Mayor Jenny Durkan for her consideration.

Nonprofit health-care providers and researchers, such as Kaiser Permanente and the Fred Hutchinson Cancer Research Center, wouldn’t have to pay the tax for the first three years. The tax would sunset in 20 years. 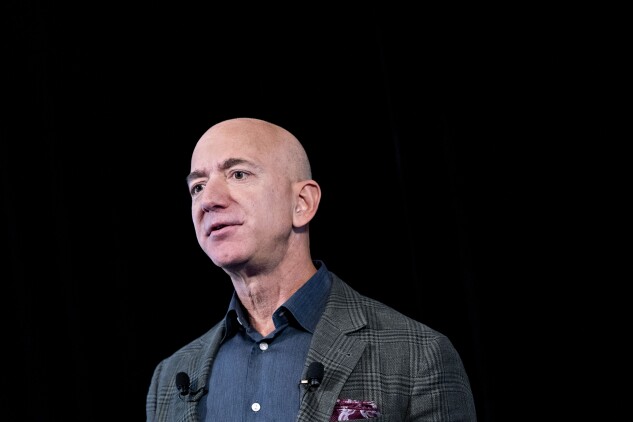 Jeff Bezos, founder and chief executive officer of Amazon.com Inc., during a news conference at the National Press Club in Washington, D.C., on Sept. 19, 2019.
Photographer: Andrew Harrer/Bloomberg via Getty Images

Passage of the tax was the climax of a long-running political melodrama that included a botched attempt by Amazon to finance the election of a more business-friendly council not as likely to tax it. The electorate, reacting negatively to an infusion of $1.5 million of Amazon cash into the 2019 election, instead voted in an even more left-leaning council sympathetic to broad calls to “tax Amazon.”

But it’s likely not the last chapter in the effort in Seattle and Washington state to address its deeply regressive tax structure and the impacts of income inequality in an increasingly expensive city on those left behind by the Amazon-driven tech boom.

The measure’s prime sponsor, council member Teresa Mosqueda, steered clear of what has sometimes been angry rhetoric aimed at Amazon for its past forays into Seattle politics in which the company sought to avoid taxation but instead helped fuel a persistent and growing “Tax Amazon” movement.

“This is just the beginning,” Mosqueda said Monday during the virtual council meeting. “We have the most regressive tax system in the entire country. And as we tried to find remedies to the Covid crisis or the economic crisis and the public health crisis, this was one remedy in a much larger-scale conversation about rightsizing our tax systems.”

Council member Kshama Sawant, a member of the Socialist Alternative political party, is the leader of a “Tax Amazon” movement. She hasn’t been shy in her quest to shift the tax burden from workers to the wealthiest corporations by directly attacking the company and its CEO, Jeff Bezos.

“The Amazon tax is perhaps the biggest progressive win in Seattle since socialists and labor unions led the way on the $15 minimum wage, which passed first here and then was won in cities and states around the country,” Sawant said during the meeting. “With massive budget cuts, our rallying cry nationally must be no to austerity, tax big business, not working people.”

Amazon didn’t return requests for comment. But the Seattle Metropolitan Chamber of Commerce, which was the conduit for Amazon cash donations in the failed attempt to remake the left-leaning council, was dismayed by the vote.

“Today’s new payroll tax pins Seattle’s economic future on local businesses remaining strong, at a time when the depth and breadth of this crisis is still unfolding,” Chamber spokeswoman Alicia Teel said. “All of our leaders should be thinking day and night about how to get businesses back open and people back to work safely. Instead, the council jumped immediately to new revenue and passed one of the largest tax increases in Seattle’s history.”

Seattle-headquartered Expedia Group appeared with Mosqueda last month at a news conference when she unveiled the bill, but it didn’t explicitly endorse the measure. “Our employees are invested in making progress on affordable housing, homelessness, and economic recovery,” Expedia Government Affairs Manager Richard Lazaro said in an email Monday. “We believe that regional or statewide issues like these are best addressed through regional or statewide solutions.”

To contact the editors responsible for this story: at tmay@bloomberglaw.com; at mmali@bloombergindustry.com