Tax-advantaged land deals known as syndicated conservation easements are set up solely for tax avoidance and will continue to cost the government billions in lost revenue if allowed in their current form, a Senate Finance Committee investigation found.

A bipartisan report, released Tuesday, compared the deals to inserting a dollar into a vending machine and getting two back. It sets the stage for Congress to pass legislation to stop abusive versions of these transactions, which have been under IRS scrutiny for years.

“The abuse of the charitable conservation easement tax incentive must be put to an end,” said Sen. Steve Daines (R-Mt.), who has sponsored legislation to curb easement deals.

Syndicated easements involve promoters who solicit multiple investors to buy interests in a property. The right to develop that property is then donated for conservation purposes, which allows investors to take a tax deduction under tax code Section 170(h).

Wyden said Tuesday that the problems with the land deals are serious and persistent.

“Since 2016 I have been deeply concerned about abuse of syndicated conservation easement program, and the threat a few bad actors pose to a program that’s critical to preserving open lands,” he said in a statement.

Partnership for Conservation, a group that supports syndicated easements, questioned the impartiality of the Finance panel in a statement Tuesday, suggesting that investigators’ minds were made up at the start.

“At the announcement of the investigation, before any data was collected, committee staff made clear it was going to find abuses, and it comes as no surprise that the report reached this predetermined conclusion,” Robert Ramsay, chairman and president of P4C said. 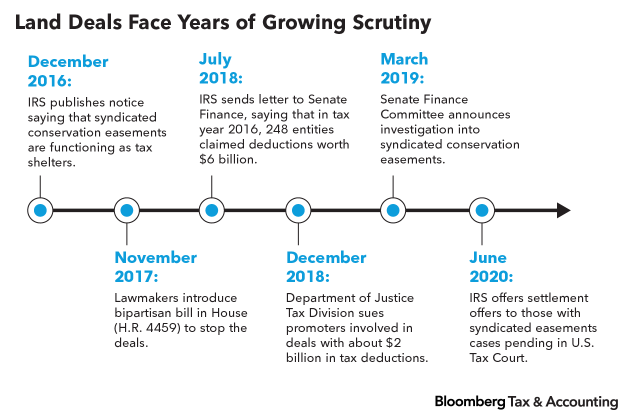 The Senate Finance panel suggested there is a significant gap between how these transactions are publicly characterized by promoters and their true nature. The one common element, according to the report, is inflated appraisals claiming the land had development or extraction potential. That increased the stated value of the donation and created charitable deductions several times the amount of the investment.

“Their emails tell a much different story, that the taxpayer-investors had no interest in a wide variety of land-investment possibilities; they just wanted to buy tax deductions,” the Finance panel’s report said.

Professional athletes, rock stars, entertainers, doctors, and lawyers, in the southeastern United States were among those who invested in these deals, the report said, but didn’t name any of them.

The IRS has flagged syndicated easements on its most recent “Dirty Dozen” list of alleged tax scams, estimating that between 2010 and 2017, these transactions lowered federal income tax bills by billions of dollars. The agency in June offered a limited settlement for those with syndicated conservation easement cases docketed at the U.S. Tax Court, following a string of court wins.

A Bloomberg Tax investigation in January found that these deals are still going on.

An ongoing Justice Department lawsuit against Ecovest Capital Inc., one of the biggest sponsors of these deals, and others alleges that they promoted conservation schemes with inflated tax deductions of about $3 billion.

One transaction spotlighted in the Senate Finance report is Azalea Bay Resort LLC, promoted by Ecovest with land in North Myrtle Beach, S.C. It involved an appraisal that created over $43 million in tax deductions.

The presence of a wastewater treatment facility at the Azalea Bay property “has been irrelevant to the dramatic increase in land values in the area. The facility is almost totally hidden, and prices of real estate in the surrounding areas have continued to escalate,” Ecovest said in a comment Tuesday.

Ecovest also said that it cooperated with the investigation, and that no finding in the report shows any of its projects “failed to abide by federal law.”

Another transaction flagged by investigators was a deal in Polk County, Fla., involving another top syndicator, Ornstein-Schuler Investments. That transaction revolved around a valuation roughly 3,600% higher than the asking price for the land a few months earlier, investigators found.

OSI didn’t respond to a request for comment on the report’s findings.

An attorney representing appraiser Claud Clark, who is mentioned several times in the report, said he stands by his valuations.

The Land Trust Alliance, a group that has opposed these transactions, said the report makes clear why Congress needs to act.

“For too long and at a terrible cost to taxpayers, bad actors have disguised abusive tax shelters as legitimate conservation donations,” said Andrew Bowman, president and CEO of the alliance.

One potential candidate for a crackdown by Congress is a bipartisan bill (H.R. 1992, S. 170) that would prevent partnerships from profiting from the donation of a conservation easement when the charitable deduction claimed is more than two-and-a-half times the amount invested.

“Shady tax deals often have a low profile with the public, but that doesn’t make them any less wrong,” Grassley said in a Tuesday statement. “Serious, fair enforcement of our tax laws is the best way to preserve that system and uphold our understanding that the law applies equally to all of us.”

To contact the reporter on this story: in Washington at kbasu@bloombergtax.com