Some states are trying to crack down on companies continuing to shift income to offshore tax havens and domestic havens such as Delaware, which doesn't tax intangible assets such as patents and trademarks.
Photographer: William Thomas Cain/Getty Images

Lawmakers in a half-dozen states are considering measures that would tighten their statutes for taxing large multistate corporations and crack down on tax avoidance strategies involving intercompany transactions.

Proposed legislation in Florida, Maryland, Pennsylvania, and Virginia would bring mandatory unitary combined reporting into their corporate income tax codes. The change would ensure multistate businesses file a single return featuring the income and expenses of parents and their affiliates, regardless of location. Legislation pending in Hawaii and New Hampshire would take an additional step, moving to worldwide combined reporting.

The bevy of bills reflects mounting frustration with tax losses primarily in the 17 separate reporting states, which allow for separate tax returns for each business entity in an affiliated group. Progressive lawmakers are driving much of the campaign, offended by years of income shifting to offshore tax havens and domestic havens such as Delaware, which doesn’t tax intangible assets such as patents and trademarks.

“Florida is one of a shrinking group of states that still allows big corporations to dodge taxes by moving profits to subsidiaries in other states and countries,” said State Rep. Anna Eskamani (D), who has pushed for combined reporting in her state for several years. “The world’s biggest corporations — Amazon, eBay, Chevron, Target, Microsoft, and more — avoid millions in Florida taxes by creating sham transactions, such as paying themselves to use their own logos, that are done solely to shift profits out of Florida.”

Combined reporting is already a requirement in 28 states and the District of Columbia. Recent additions to the combined reporting states include Rhode Island, Connecticut, Kentucky, New Jersey and New Mexico.

States are also responding to international demands for tax compliance, aimed increasingly at large technology companies. The Organization for Economic Cooperation and Development has been seeking agreement among nearly 140 jurisdictions to rewrite global tax rules to better fit digital business models that can operate in a market without physical presence.

Business interests aren’t conceding any ground, warning lawmakers that unitary combined reporting is a road paved with diminished economic potential, erratic revenue patterns, and administrative complexity. More importantly, the unitary reporting approach will put the separate reporting states, concentrated in the Southeast, at a competitive disadvantage with neighboring jurisdictions, according to business interests.

“I don’t think it’s a sustainable long-term economic plan to target large companies,” said Sean Looney, a vice president at Comcast NBC Universal, testifying during a hearing this month examining Maryland’s combined reporting bill. Large companies bring many jobs and investment and this is not “the time to penalize those large companies,” he said. 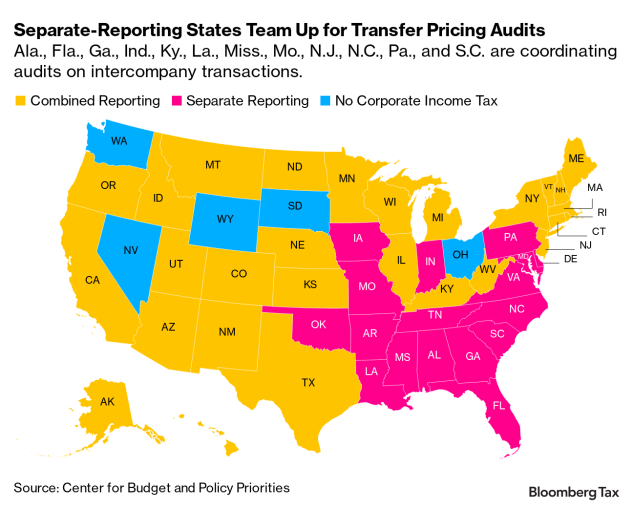 The march toward combined reporting reflects growing frustration with patterns of corporate tax base erosion over the last 40 years. An analysis by the National Conference of State Legislatures revealed corporate income tax was 9.4% of total state tax collections in 1981, dropping to 4.8% by 2018. Much of the problem is attributed to savvy companies concentrating high-value assets in subsidiaries, said Michael Mazerov, a senior fellow at the Center on Budget and Policy Priorities and a critic of separate reporting.

Maryland is the mostly likely adopter this year, eyeing combined reporting with bills in both the House of Delegates (H.B. 172) and the Senate (S.B. 511). Both bills would require corporations to calculate their taxes together with affiliated businesses, effective July 1, 2021. The Senate version includes a “throwback rule,” permitting Maryland to tax so-called “nowhere income,” or income that isn’t taxed by another state.

Maryland’s Department of Legislative Services estimates the bill would raise $92.6 million for fiscal 2022 and close to double that annually in subsequent years. Prospects for full enactment are encouraging, said Sen. Paul Pinsky (D), chief sponsor of the Senate version of the bill.

The House passed a similar bill last year, but progress stalled in the Senate after the legislative session ended early. Pinsky conceded Republican Gov. Larry Hogan would likely veto any combined reporting bill, but an override is likely in the Democrat-controlled legislature.

“Companies shouldn’t be able to incorporate subsidiaries in Nevada or Delaware and pay zero corporate taxes in our state,” Pinsky said.

Douglas Lindholm, president of the business-focused Council on State Taxation and an opponent of combined reporting, expressed doubts about Pinsky’s bill, saying “Maryland has had a combined reporting bill for 10 years, so why would this year be any different?”

Virginia is considering a bill, S.B. 1353, adopting mandatory unitary combined reporting beginning Jan. 1, 2022. But lawmakers appear more likely to support H.J. 563, which would establish a work group to assess the feasibility of transitioning to a combined system and provide a report to the legislature no later than Nov. 1. The resolution passed the House on Jan. 29 by a vote of 73-21 and now sits in the Senate Rules Committee.

Pennsylvania Gov. Tom Wolf (D) used his February budget message to push for closure of the “Delaware loophole,” a shift to combined reporting and a gradual cut in the corporate rate from 9.99% to 6.49% over five years. Chances, however, remain slim due to Republican control of both the Senate and House.

Rep. Fred Hawkins (R) started the discussion in Florida Feb. 15, introducing H.B. 999, which would transition his state to combined reporting beginning on July 1, 2021. The bill specifies revenues collected under the change must be used to reduce the state’s commercial property rent tax. A report by the Florida Policy Institute last year estimated the Sunshine State loses $477 million annually from the current separate reporting system.

Some states are eyeing global revenue, trying to repeal features of their combined reporting systems that permit multinational corporations to exclude profits generated beyond the “water’s edge.” Such worldwide reporting rules would require corporate taxpayers to account for profits earned in the state, but shifted to international subsidiaries. Several states including California, Connecticut, Massachusetts, and Montana currently permit worldwide reporting, but none require it.

Some lawmakers in Hawaii want worldwide reporting to become a hard requirement under H.B. 441 and S.B. 1302, which would transition the state beginning Jan. 1, 2022. The preamble of the legislation points to a 2019 report by the Institute on Taxation and Economic Policy that found offshore tax havens cost Hawaii $38 million annually.

New Hampshire, which stands to collect $177 million according to ITEP, is taking the same approach under H.B. 102. The bill states “the water’s edge method promotes tax havens like Bermuda and Luxembourg and encourages the shifting of profits.”

The Council on State Taxation recently submitted letters to lawmakers in both Hawaii and New Hampshire opposing the bills, writing the two states would become tax policy outliers.

“Mandatory worldwide combined filing is contrary to the approach to taxing corporate profits currently employed by all other states and nations with corporate income taxes,” COST tax counsel Erica Kenney wrote. “Its adoption would place Hawaii at an almost insurmountable competitive disadvantage.”