The path was nearly cleared for one of the cornerstones of President ’s domestic agenda after Democrats agreed on a revised version of their tax and climate bill.

But it came at a price: To get the support of Senator Kyrsten Sinema -- the pivotal Democratic vote in the 50-50 Senate -- a levy on wealthy hedge fund managers had to be abandoned.

So the Democrats agreed to drop a provision that would have narrowed a tax break for carried interest, meaning wealthy private equity managers and venture capitalists will continue to be able to pay a lower capital gains rate on one of their main forms of compensation. Lawmakers will also alter a 15% minimum tax on corporations and add a new 1% excise tax on stock buybacks.

Democrats have been eager to finish work on the legislation, even though it’s been drastically scaled back from Biden’s original vision for an expansive tax and social spending package that would advance the party’s climate goals.

From the White House, where he remains in isolation due to Covid-19, Biden praised it as “another critical step toward reducing inflation and the cost of living for America’s families” and urged the Senate to pass it quickly. Voting will begin this weekend.

There is still one more hurdle. Senate Democrats are still waiting for the parliamentarian to determine whether parts of the bill meet the chamber’s strict budget rules.

That means things like the domestic content requirements for cars eligible for electric vehicle tax credits, caps on insulin out-of-pocket costs and penalties for drug companies raising prices higher than inflation could be struck. That would dilute the bill even further.

Senate Majority Leader said in a statement that the revised legislation will be brought to the chamber floor on Saturday, setting the bill on the way to passage with a simple majority vote.

He believes all 50 members of the Democratic caucus back it, including West Virginia Senator , who was a critical partner in resurrecting the bill.

Removing the measure to raise taxes on private equity managers from the bill means that the legislation, which Democrats initially envisioned as a way to overhaul the tax code, won’t include any new taxes on the rich.

It’s a compromise for sure, but Democrats are running out of time given they are expected to suffer heavy losses in midterms in November. Biden in the first proposals for this bill called for hundreds of billions of tax increases on wealthy Americans, ranging from nearly doubling the capital gains tax rate to much stricter inheritance taxes.

The stock buyback provision was on the table during months of talks between Schumer and Manchin but was dropped in favor of the 15% minimum tax on large companies.

Manchin has repeatedly said that the bill does not have any new tax increases and only aims to stop tax avoidance. The new stock buyback tax goes counter to that approach. His office did not comment Thursday night.

Stock markets took the news in stride, with futures on the S&P 500 Index rising 0.2% before the official open of US exchanges.

Still, the buyback tax is unlikely to be welcomed by investors, said , an analyst at . She said that to avoid the tax, companies could increase dividends to shareholders.

The deal struck to get Sinema on board would pare back the original 15% corporate minimum tax proposal by creating an exemption for depreciation tax deductions. The hole created by this new exemption as well as by nixing the carried interest provision would largely be made up for with the 1% excise tax on stock buybacks, according to people familiar with the talks.

The stock buyback tax, however, is expected to generate less than the $124 billion estimated when the House passed it last year.

One of Manchin’s other demands was that the legislation cut the deficit.

Other revenue would come from stricter enforcement of tax compliance by the Internal Revenue Service, repealing a Trump administration restriction on prescription drug rebates, generating $122 billion, and by allowing Medicare to negotiate the cost of high-priced drugs, which generates $102 billion.

Sinema said in a statement that she will continue talks with Senator , a Virginia Democrat, about separate legislation to narrow carried interest, a tax break for investment fund managers.

The fate of that effort remains murky, given a possible Republican takeover of one or both chambers of Congress in November’s midterm elections, which could eliminate the ability of Democrats to pass such a bill after January.

The legislation as drafted before the talks with Sinema would spend $370 billion on climate change measures and energy programs while extending Obamacare premium subsides for three years. Sinema mentioned a boost to clean energy through her efforts but details on that were not immediately available. 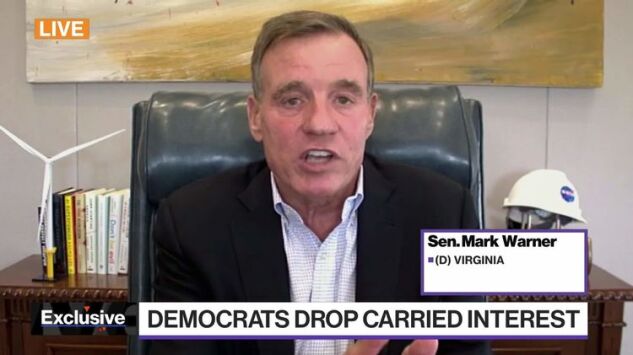 WATCH: Senator Mark Warner, a Democrat from Virginia, talks about the bill on “Balance of Power.”