Regardless of whether Joe Biden’s Social Security proposal will make it through Congress, the messaging regarding benefits needs much improvement, writes Sita Slavov of the American Enterprise Institute and George Mason University’s Schar School of Policy and Government. Workers need to understand that they don’t need to claim benefits when they retire and that benefits rise steadily with delay.

President-elect Joe Biden’s Social Security proposal has received media attention lately, as observers speculate about whether he will be able to reach agreement with Congress on the issue during his first term. In the meantime, however, some straightforward changes in messaging can improve retirement security by helping people make better decisions about when to claim their Social Security benefits.

Social Security benefits for workers can be claimed at any age between 62 and 70. Those who claim later receive permanently higher monthly benefits, which can also be passed on to a surviving spouse. A growing body of research—including a couple of studies that I’ve coauthored—shows that many people can increase the lifetime value of their benefits by delaying, and that the stakes can be large. 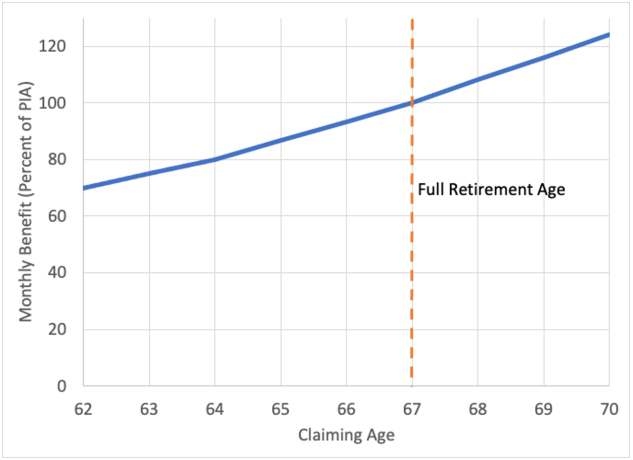 Moreover, the term “full retirement age” is misleading. It could—understandably—lead one to conclude that this is the age at which one receives a “full” benefit. But full is defined relative to PIA—a wonkish concept that isn’t meaningful to the average person. The benefits paid at full retirement age do not represent the maximum benefit a person can receive; in fact, benefits continue to grow with delay until age 70.

Despite the fact that full retirement age isn’t an economically meaningful concept, research suggests that benefit claiming tends to cluster around that age—possibly because workers take the designation of a full retirement age as a recommendation from the government or a starting point for retirement planning.

A recent Bipartisan Policy Center report suggests clearing up this confusion by referring to age 62 as the “minimum benefits age” and 70 as the “maximum benefits age.” Framing it this way accurately conveys the message shown in the figure—that benefits increase steadily as one delays claiming between age 62 and 70. (References to “full retirement age” can be dropped as this concept conveys no helpful information and likely has an unintended impact on claiming decisions.)

Unfortunately, Social Security Administration publications sometimes use the term “retire” to refer to the act of claiming a benefit. For example, the page directing people to the online application for benefits asks, “Ready to Retire?”

This messaging can be important. Recently, some coauthors and I conducted a survey exploring the reasons behind people’s Social Security claiming decisions. A large number of respondents associated their benefit claiming decision with retirement – even though another study I coauthored showed that many people have enough private retirement saving to delay claiming beyond retirement. In light of evidence like this, the Bipartisan Policy Center report sensibly recommends that the Social Security Administration change its messaging to emphasize that retirement and claiming can be separate decisions.

Retirement planning can be complex, and the Social Security claiming decision is an important part of that planning. A few simple changes would ensure that older Americans are in a better position to understand the choices available to them.

Sita Nataraj Slavov is a visiting scholar at the American Enterprise Institute, where she specializes in public finance and the economics of aging (including older people’s work and retirement decisions, Social Security, and tax policy). She is concurrently a professor of public policy at the Schar School of Policy and Government at George Mason University.