A dispute in the Senate over expanded unemployment benefits for lower wage workers is threatening to delay passage of the $2 trillion coronavirus relief package as several Republicans demanded changes and independent Senator said he would hold up a vote if the legislation is altered.

Treasury Secretary dismissed the four GOP senators’ objections and said he expects the Senate to quickly pass the legislation.

“Our expectation is this bill passes tonight and gets to the House tomorrow and they pass it,” Mnuchin told reporters at the White House on Wednesday evening.

Senator of South Carolina and several colleagues want to limit the unemployment insurance provisions for lower-wage workers, warning that, as written, they would damage the economy by providing millions of workers with more money in unemployment benefits than they make on the job.

Graham, of Nebraska, of Florida and of South Carolina said the provision, granting workers an additional $600 per week in unemployment benefits for four months, would give employers an incentive to cut some employees and encourage laid off workers to stay out of the work force.

“This bill pays you more not to work than if you were working,” Graham said, adding it would provide the equivalent of $24.07 an hour in his state to laid-off workers. The minimum wage in the state is $7.25 an hour. 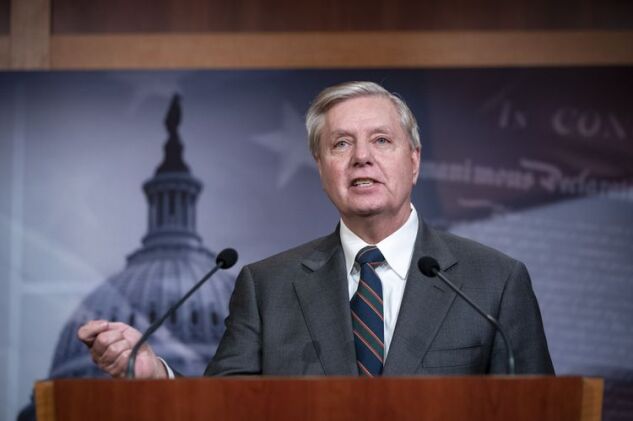 He said that would “destroy what’s left of the economy.”

Mnuchin said the flat $600 per week “was the only we could ensure the stated could get money quickly and in a fair way,” since it would take too long to tailor benefits to a person’s most recent salary. He said he had spoken with the Republican senators about their concerns and that he expects the vote to go ahead.

“I don’t think it’ll create incentives,” Mnuchin said. “Most Americans what they want is they want to keep their jobs.”

The senators had also warned that the enhanced benefits could disrupt supply chains as well.

“If the federal government accidentally incentivizes layoffs, we risk life-threatening shortages in sectors where doctors, nurses and pharmacists are trying to care for the sick, and where growers and grocers, truckers and cooks are trying to get food to families’ tables,” Tim Scott, Graham and Sasse said in a statement.

In response, Sanders, a candidate for the Democratic presidential nomination, tweeted that he’d hold up the bill and insist on more strings on money for corporations unless they drop their concerns.

“Unless Republican senators drop their objections to the coronavirus legislation, I am prepared to put a hold on this bill until stronger conditions are imposed on the $500 billion corporate welfare fund,” Sanders tweeted.

A spokesperson for Senate Finance Committee Chairman , an Iowa Republican and one of the primary negotiators of the provision, rejected the GOP senators’ arguments.

“Nothing in this bill incentivizes businesses to lay off employees, in fact it’s just the opposite,” Taylor Foy said in an email to Bloomberg News. “The goal all along has been, first and foremost, to help businesses make payroll so employers don’t have to lay off employees, and to ensure that there’s a robust unemployment insurance program to help those who have lost their jobs.”

The senators at a press conference asked that jobless insurance be capped at 100% of a laid-off worker’s salary. Graham said he hoped the Senate would agree to revise the measure, but that he otherwise he would want a vote on an amendment to fix the provision.

It wasn’t immediately clear if their demands would be met.

House Speaker said the jobless benefit wouldn’t create an incentive for workers to leave their jobs. “You can’t just quit and say I’m going on unemployment,” she said on PBS.

“The Democrats, Republicans and the White House are in agreement that we should have this $600 payment,” she said, in part because it’s too complicated to create a different payment level for each state.

Democratic Senator of Connecticut ripped the push to shrink the benefit for lower-wage workers.

“Let’s not over-complicate this. Several Republican senators are holding up the bipartisan Coronavirus emergency bill because they think the bill is too good for laid off Americans.”

The $600-per-week flat rate boost in jobless benefits was a compromise reached by Senate Republican and Democratic negotiators, as well as the Trump administration.

Some of the people involved in the talks had worried that capping the temporarily increased unemployment benefits to workers’ previous earnings would be too technically difficult and significantly delay money for individuals at the height of the virus-driven economic shock.

The across-the-board increase was intended to “deliver needed aid in a timely manner rather than burning time to create a different administrative regime for each state,” Foy said.

He added that the Senate was still trying to vote on Wednesday night and working on a possible regulatory fix with the Department of Labor.