While Congress wrestles with another round of Covid-19 relief, states are still figuring out how they can spend the last pot of money they received months ago.

States have allocated 75% of federal funding received through the CARES Act that was signed nearly five months ago, according to a survey from the National Association of State Budget Officers. But based on their latest reports to Treasury, the average state has only spent just 18% of the money.

While states continue to parse out how they’re allowed to use funding—and whether scheduling spending before the end of the year qualifies as using it—many could run out of time well before they run out of money.

“It’s been extremely difficult,” said Patrick Goldsmith, director of the fiscal division for Louisiana’s House of Representatives. “We would get one set of guidance, and it would lead to a whole new group of questions. We would think maybe we can go this direction, then an updated set of guidance would come out, and then no, we couldn’t, but now maybe we can do this? We were constantly pivoting and trying to figure out what’s the best way to go.”

The large discrepancy is due in part to allocations scheduled for local government to use, but not yet spent. Around the country, fiscal officials say there has been flip flopping guidance on whether allocating money before the end of the year—when it’s set to expire—qualifies as spending it.

State fiscal departments have blamed several factors for delays, including confusing and late guidance on permitted uses of funds and a fear the federal government may later claw back misspent funds.

The $150 billion that Congress sent came with a big caveat: it could not be used for revenue replacement—aid states had clamored for since the onset of the pandemic as sales taxes dry up and late collections burn holes in their budgets.

The next round of relief should either send more money for direct budget use, or free up the last round, but in the meantime it’s been difficult to figure out how exactly states are allowed to spend the money, said Kirk Fulford, deputy fiscal director of Alabama’s Legislative Services Agency.

“We weren’t hesitant to spend it; we were just scratching our heads on how we could spend it,” Fulford said. 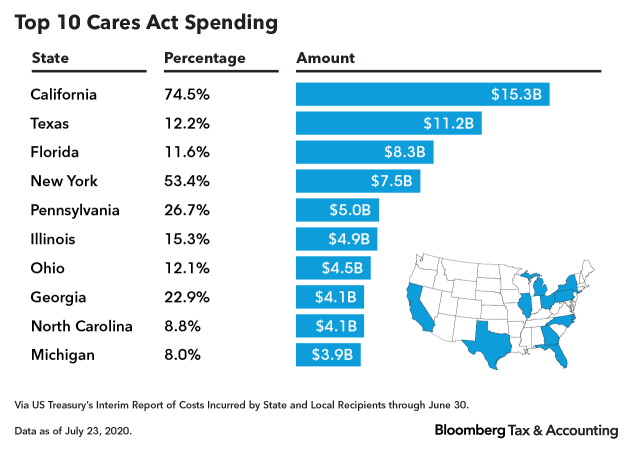 Treasury has been advising states with guidance but fiscal officials say updates have been both lagging and confusing.

One of the initial limits on spending Congress placed was that expenditures must be “necessary.” Treasury explained this as an “expenditure is reasonably necessary for its intended use in the reasonable judgment of the government officials responsible for spending Fund payments”.

“What does that mean—'reasonably necessary'—according to who, was our question,” said Fulford. “Originally ‘necessary’ to me meant we don’t have to do all this paperwork and I can justify it on the back end, but they could mean something else so it really creates an issue.”

Alabama has only used a quarter of its $1.8 billion.

Lawmakers in Alabama had hoped to use some of the $1.8 billion they received to facilitate online-learning capabilities for school students, but they had to scrap the idea after a conversation with Treasury indicated money didn’t just need to be obligated by the end of the year—it needed to be out the door.

“There is no way you could facilitate something like that between now and the end of the year,” Fulford said.

Other states had also operated under the impression that money needed to be spent before the end of the year.

“We shared that same time frame concern,” said Stephanie Barrett, associate fiscal officer for the Vermont Legislature’s Joint Fiscal Office. “We were hoping we could obligate funds and let a project run out over a longer period of time.”

But in June, Treasury indicated as long as the expense was allocated before the end of the year—the actual expenditure could occur up to three months after.

“These kinds of conflicting stories have been pervasive throughout conversations on how to use the money,” Nauman said. “Although I commend Treasury for doing as good a job as they could because they were tasked with such a big job.”

While fiscal directors are responsible for interpreting Treasury’s understandings, authority to spend the money lies with lawmakers.

Even in states like West Virginia, which received the minimum $1.2 billion, narrow restrictions and the short timeline to spend has led to a surplus of leftover money. Gov. Jim Justice (R) had proposed $100 million for “COVID-19 related highway projects” to make use of leftovers, although Treasury made clear early on that money could only be spent on costs directly associated with the public health emergency.

Branding his infrastructure project with the virus’ name to get around that rule has raised eyebrows from some folks, including Sen. Joe Manchin (D-W.Va.), who in a Fox News interview in June criticized the notion saying, “I don’t know of a pothole that has had the Covid virus.”

Manchin also said he would be reluctant to support another stimulus bill, noting many states have yet to distribute their initial funding.

Fiscal officials say, if states were just allowed to pump funding into budgets, they’d be able to spend a lot more on education, health care, and other programs that may be depleted by widespread revenue shortfalls.

In Minnesota, fiscal officials wrestled with whether they could spend their $1.8 billion on the state’s share of the federal match for the Federal Emergency Management Agency.

“We didn’t know for the longest time whether we could use the coronavirus relief money to meet the match,” Nauman said. “In order to maximize Minnesota’s money, we wondered ‘Should we spend it on something that we think is eligible?’ or wait.”

Eventually, Treasury indicated in June that funds could be used for a FEMA match, Nauman said. Guidance, however, still lists using funds for a state’s share of their Medicaid match as an ineligible expenditure.
Minnesota still has $319 million left to allocate as of Aug. 5, according to Nauman.

Widespread concern over federal auditing on expenditures has been another roadblock to getting money out the door, fiscal directors said.

“It’s still a little bit unclear what that audit will look like,” Nauman said. “Are we going to have 50 folks knocking on state fiscal executive branch offices saying, ‘Okay, where did you spend the money?’ Or is it going to be more nuanced than that?”

Most of the $150 billion went directly to states, although local governments with more than 500,000 residents received a direct payment as well. States were instructed to send some of their funds to local governments that received nothing, but there was little direction on how to do so.

Balancing the risk of a clawback with the likelihood that Congress would eventually change restrictions anyway has been “intense,” Barrett said.

In Louisiana, there’s little worry over the shrinking timeline to get money out the door; and that’s because they’ve spent it all.

Goldsmith says since the legislative session began right before the pandemic forced shutdowns, Louisiana had more time to react to Treasury’s slow-paced guidance.

“We were able take all the guidance that had come out over the months and craft it into a budget.”

Goldsmith said using funds on the budget is less of a concern now as Congress’ next round of relief may permit broader use of the money.

“I guess that gamble will have paid off,” Goldsmith said.

Sam McQuillan
Reporter
Stimulus Talks Are Stuck in $1 Trillion Ditch Over Aid to States
States Wary of Trump Move for Them to Kick In on Federal Aid (1)
© 2023 Bloomberg Industry Group, Inc.
All Rights Reserved