The Inflation Reduction Act offers a host of new fiscal measures—mostly tax cuts—to help combat climate change. Thornton Matheson of the Urban-Brookings Tax Policy Center breaks down what gets incentivized in the legislation and the impact it will make on the environment.

The Inflation Reduction Act includes a host of new fiscal measures—mostly tax cuts—to reduce US greenhouse gas emissions and build resilience to climate change. According to official estimates, green tax credits will expand by $270 billion over the 10-year budget window, along with roughly $117 billion in spending increases and $20 billion in additional fossil fuel charges.

The Senate estimates that the legislation will reduce US greenhouse gas emissions to 40% of their 2005 levels, roughly doubling the reduction already achieved. An additional 10% reduction will therefore be needed to achieve the 50% goal that the US committed to in the 2015 Paris Accords. 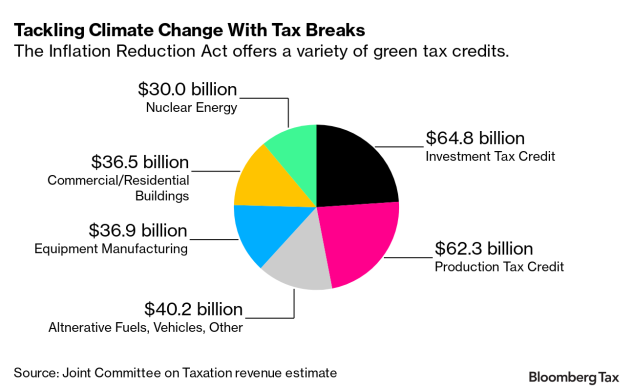 Historically, the investment tax credit has provided a credit of up to 30% of capital costs, mostly for solar energy. The production tax credit has provided a subsidy of up to 2.5 cents per kilowatt hour of renewable energy produced for a project’s first 10 years, mostly for wind power. Credit eligibility varies by type of energy source, and both the investment tax credit and production tax credit have lapsed and been renewed numerous times. This has created discontinuities and uncertainty for clean energy producers that has interfered with investment.

The legislation retroactively extends the production tax credit—which expired at the end of 2021—through Dec. 31, 2025. It also extends the investment tax credit, which is set to phase out by the end of 2024, through the end of 2025, and expands its coverage to energy storage, biogas, electrochromic glass, and microgrid controllers. After 2025, energy tax credits will transition to the technology-neutral clean electricity production and investment credits.

The new tax credits will be more fungible, which could substantially lower clean energy producers’ capital costs. Currently, energy companies with insufficient taxable profits seek “tax equity partners” that provide funding in exchange for tax credits—an expensive source of financing. Under the bill, taxable companies can instead sell the credits to more profitable firms, while public and nonprofit energy producers can obtain a cash refund.

The legislation also responds to growing concerns about climate justice, with increased tax credits and budgetary spending targeted to disadvantaged communities. In 2023 and 2024, solar and wind projects with a maximum capacity of 5 megawatts established in low-income and Native American communities can qualify for a bonus investment tax credit of 10% to 20%.

Manufacturers of clean energy equipment also will have access to expanded credits under the proposal. An additional $10 billion of advanced energy project credits will be allocated, including $4 billion targeted at energy communities. This investment tax credit of up to 30% benefits projects that reequip, expand, or establish manufacturing of a variety of energy-related products, including renewable energy and alternative fuel production equipment, energy storage systems, and electric vehicles.

The new advanced manufacturing production credit will subsidize wind and solar power equipment. For example, offshore wind turbines will receive a subsidy equal to 10% of their sales price, and photovoltaic wafers for solar panels a subsidy of $12 per square meter.

The bill also includes a handful of fiscal charges on fossil fuels, including an innovative fee of $900 to $1,500 per metric ton on methane emissions from petroleum extraction, which account for at least 3.5% of US greenhouse gas emissions. Now that the bill is law, the US has become only the second country in the world to impose a methane fee after Norway.

The Congressional Budget Office estimates that the methane fee will raise about $6.5 billion over the budget window. The legislation also reintroduces and makes permanent Superfund taxes on oil at the rate of 16.4 cents per barrel, indexed to inflation ($11.7 billion). Similarly, it makes permanent Black Lung Disability Trust Fund taxes on coal of $0.55-$1.10 per ton ($1.2 billion).

Thornton Matheson is a senior fellow at the Urban-Brookings Tax Policy Center, where her work focuses on business and environmental tax policy. She previously was a senior economist in the tax policy division of the International Monetary Fund’s Fiscal Affairs Department and a financial economist for the US Treasury Department’s Office of Tax Analysis.