The Biden administration’s planned capital gains overhaul has tax professionals and wealth advisers eager for more details, including how lawmakers will tailor legislative language concerning the way contributions to partnerships are taxed.

President Joe Biden’s proposal goes beyond raising the top rate for gains by stocks, bonds, real estate, and other assets. His plan, intended to pay for trillions of dollars in new infrastructure and social spending, also calls for taxing appreciated assets passed on through gifts or at death.

That includes, according to details contained in the Treasury Department’s recent “Greenbook” of revenue proposals, taxing transfers of property into, and distributions from, certain entities including partnerships. The Greenbook language on partnerships raised concerns for several tax professionals, including lawyers at Gibson, Dunn & Crutcher LLP, who referred to it as “startling in its breadth.”

But a Treasury official told Bloomberg Tax that the proposal is intended to be a narrow anti-abuse provision targeting planning techniques people might try to use to sidestep new capital gains taxes. The proposal is focused on property transferred by donors or deceased owners and isn’t intended to completely upend existing law that generally treats those types of partnership transactions as tax-free, the official added.

Desmond and Brad Dillon, a senior wealth strategist at UBS Group AG in New York City, said they are interested to see how Congress handles the anti-abuse proposal, since it won’t be an easy feat to write rules that are effective, while not overly broad.

“It is not clear to me how they would draft a provision to accomplish that,” Desmond said.

A central part of Biden’s capital gains plan is to end an existing benefit, known as “step-up in basis,” which allows heirs to use the market value of assets upon inheritance as the cost basis for capital gains, rather than the historical purchase price. Under current law, any appreciation that occurred under the prior owner escapes federal income tax.

The Biden plan would remove this perk by imposing a tax on large gains held at death. However, the administration provided some relief, including a provision to allow that tax to be paid over a 15-year period for illiquid assets, other than family business interests eligible for indefinite deferral under the plan.

The ability to spread the tax over 15 years could be an “amazing opportunity for clients,” said William I. Sanderson, partner and co-chair of the private wealth services group at McGuireWoods LLP.

Tax professionals said they would like to see more details on the types of assets that are considered illiquid.

“Lots of wealthy people have illiquid assets because they invest in hedge funds, for example,” said Beth Shapiro Kaufman, a member in Caplin & Drysdale Chartered’s Washington, D.C. office. “I assume that those would be considered illiquid because they aren’t readily tradeable.”

It would also seem that assets such as land would be eligible for the benefit, Sanderson said.

The Treasury official said details will be fleshed out as the proposal works through Congress, but the department felt it was necessary to give taxpayers holding truly illiquid assets flexibility to pay over time. 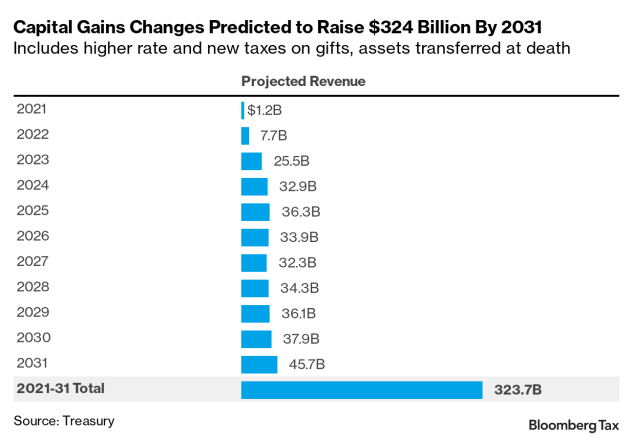 Current law allows individuals to spread out payments of the estate tax on closely-held businesses for a similar amount of time. But the Greenbook proposal suggests a much broader application for assets subject to the capital gains tax at death, tax professionals said.

That could potentially create unique issues for the IRS and for taxpayers, Desmond said.

The IRS typically has three years to audit a return and assess any additional tax, and 10 years to collect. But because the capital gains tax would be spread over a 15-year period, it is unclear if that would also give the IRS an extended amount of time to audit that tax or for taxpayers to challenge the amount if they think it is too high, Desmond said.

Tax professionals also questioned the usefulness a provision that allows individuals to shield $1 million of unrealized gains—$2 million for married couples— from tax when gifting appreciated assets. The exemption also applies when assets are transferred at death, but in a slightly different manner.

Professionals noted that when it is applied to gifts, recipients have to eventually make up the capital gains tax on the amount exempted by the donor when they sell the assets.

Specifically, the Greenbook says recipients have to use the original basis in the property—the amount the donor paid for it—when calculating their capital gains bill on any portion of the gain the donor was able to shield from tax. Assets transferred at death wouldn’t be subject to the same limitation.

According to the Treasury official, the department proposed applying the exemption differently because it felt like there was a distinction between assets transferred at death and assets gifted during life that could continually get passed down.

The proposal could create a “huge amount of confusion” for gift recipients, UBS’s Dillon said.

If a person receives assets that have unrealized gains above the exclusion amount—and the donor’s exclusion is applied—they could end up with a low basis on a portion of the assets but a higher basis on the rest, which they will have to track when they eventually want to sell, he said.

Desmond said the proposals in the Greenbook and the questions they raise are intended to spark discussion, with the ideas being fleshed out as they make their way through the legislative process.