Despite a government crackdown on tax shelters known as “syndicated conservation easements,” they are still being marketed in some publications.

The Department of Justice wants it shut down for promoting an “abusive tax scheme,” according to a lawsuit. Senate subpoenas have gone out. The Internal Revenue Service has pledged a broad crackdown.

Still, EcoVest Capital Inc., one of the best-known players in the market for so-called syndicated conservation easements, is pledging to continue promoting land-donation deals that the DOJ, in a lawsuit, says have resulted in “hundreds of millions of dollars of tax harm.”

“In 2019, Ecovest worked with the broker-dealers and financial advisers who know that the DOJ allegations are false, and so EcoVest’s business has continued,” Robert McCullough, the Atlanta-based firm’s chief financial officer, told Bloomberg Tax.

Those fighting words make clear the firm’s steep challenge. The company and its principals have been involved in at least 96 conservation easement syndicates resulting in more than $2 billion in federal tax deductions since 2009, according to the DOJ lawsuit. The company hired Covington & Burling LLP to defend against a federal government that is united behind ending a type of transaction that critics say bilks the tax system and also puts investors at risk.

For EcoVest, following words with action is tougher. On one hand, EcoVest offered one deal, around 629 acres of raw land along the Texas coast, which closed about a month ago. On the other, documents show little new activity by the firm since the DOJ lawsuit was filed in December 2018.

“To the extent that EcoVest’s business has slowed, it merely proves that the IRS and DOJ are engaged in a war of attrition: First making extraordinary claims of fraud and abuse, and now seeking extraordinary delays before allowing the facts to be heard by an impartial court,” EcoVest said in a statement.

On January 7, in a court filing, EcoVest criticized the department for seeking delays in its lawsuit for as long as two to three years, claiming that shows the government knows it has no case. The DOJ wouldn’t comment but said in court documents that extra time for discovery is warranted given the complexity of the case.

The other big name in the business, Ornstein-Schuler, said it quit offering new syndicated easement deals in January 2019. But other promoters have continued to offer new deals. The lure for high-net-worth investors is a powerful one—write off as much as six times your investment and maybe cut your tax bill in half—even as they risk audits and the possibility that they will have to pay back any tax benefits plus interest and penalties.

“I fear that there may be hundreds and hundreds of investors, maybe more, who just don’t even realize the time bomb they are holding,” said Dietrich Epperson, of Epperson & Greenidge LLP, a law firm that represents victims of securities fraud.

Donations of land to prevent it from being developed are encouraged by tax laws. Individuals can give land to conservation groups and take a charitable deduction for its appraised value, as they might with a work of art.

The DOJ and IRS claim the deals they targeted involve promoters selling shares in a partnerships that buy land and donate it to a conservation organization. The abuse occurs when the land value is based on an appraisal that includes unrealistic or fabricated estimates for potential development.

The deals drew closer IRS scrutiny in 2016 when the agency issued a notice declaring certain syndicated conservation easements as “listed transactions,” or tax shelters. Specifically, the IRS notice listed transactions where investors receive promotional material offering the possibility of a charitable contribution deduction worth at least 2 1/2 times their investment.

The DOJ lawsuit alleges that EcoVest’s deals amount to “nothing more than a thinly veiled sale of grossly overvalued federal tax deductions under the guise of investing in a partnership.”

“With respect to the DOJ case, the allegations that the DOJ has made are not true,” said , a partner with Covington & Burling who is representing the company. “EcoVest’s activities and statements have been proper, in full compliance with the law, and fully consistent with congressional intent in enacting the law to conserve land.”

EcoVest Capital, formed in 2012, describes itself as a “next generation real estate company” that believes “development opportunities should not be judged on economic viability alone, but that the responsible use and preservation of natural resources should be equally considered.”

McCullough, who has an MBA from Georgia State University, became senior VP and CFO for the company in January 2014. Prior to his work there, he was an officer with Wells Real Estate Funds and is an alum of Arthur Andersen’s Atlanta office.

Not long after DOJ filed its lawsuit, the Senate Finance Committee opened an investigation. The committee has subpoenaed documents from McCullough and others. The probe, launched in March 2019, is ongoing.

“There are very legitimate purposes for the conservation easement provisions of the tax code,” Finance Chairman Chuck Grassley (R-Iowa), said in a statement when the investigation was announced. “But when a handful of individuals cook up a scheme to cash in at the expense of federal revenue and in violation of Congress’s intent, something needs to change.”

The U.S. Tax Court added to the pressure on promoters on Dec. 13 in a case not involving EcoVest. The court’s opinion in TOT Property Holdings, LLC v. Commissioner held that all benefits from the syndicated transaction in question be denied. The LLC also owes the government millions of dollars in penalties for misstating the value of the easement, which was $496,000 and not $6.9 million, according to Judge .

Valuation of easements can be based on the land’s “highest and best use” under IRS rules. Land for luxury residential development, for example, is worth considerably more than raw land.

TOT argued that its valuation was based on the property’s potential value as a mountain-related residential development. But according to Gustafson’s ruling, the land isn’t mountainous and “has no significant physical features such as vistas or lake views that would lend itself to such a purpose.”

Tax Court trials in four other syndicated easement cases were conducted last year and more than 50 cases are pending, the IRS said in a press release.

EcoVest raised about $19 million by selling interests in Matagorda Cove LLC, a company initially formed in 2018, according to SEC documents. Sales commissions are listed at $2.1 million.

With brokers’ commissions at that level, “it’s amazing what they will sell,” said D. Daxton White of the White Law Firm, which represents investors in securities fraud cases.

McCullough, EcoVest’s CFO, says the “terms under which EcoVest makes its offerings are fair, reasonable, lawful, and consistent with all other real estate investments offered through independent broker dealers.”

The property consists of 629 acres of unimproved real estate in Calhoun County, Texas, along the Gulf Coast between Houston and Corpus Christi. The “date of first sale” is listed as Dec. 3, 2019.

County records show the acreage, described as consisting of “barren wasteland” and “native pasture,” as valued at about $1.1 million for assessment purposes if used for timber and agricultural purposes. There are no improvements on the land, records show. 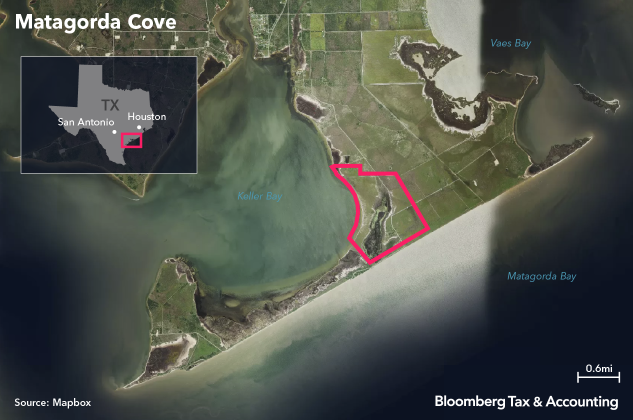 A deal around a conservation easement on this 629-acre tract in Texas closed in December.

In a private placement memorandum obtained by Bloomberg Tax, EcoVest tells investors they can vote to donate a conservation easement on the land or develop it as a residential development over the next six years. The document also discusses the Justice Department lawsuit, IRS audits, and Senate investigation in warning investors that they could be subject to penalties if the company goes the conservation route.

If the property appraisal is rejected by the IRS, it could subject members to “substantial negative tax consequences, including total disallowance of any claimed deduction and the imposition of penalties in addition to taxes and interest thereon resulting from the disallowance,” it reads.

A few dozen transactions from other sponsors that closed at the end of 2019 had many of the hallmarks of syndicated conservation easements as described in the 2016 IRS notice that identified them as tax shelters, according to a person familiar with the deals.

Among them is Ohoopee Holdings LLC, which bought a 473-acre property in Emanuel County, Georgia. The LLC donated a conservation easement to the Atlantic Coast Conservancy on the property at the end of December, according to the deed transfer document filed with the county.

Shares in Ohoopee Investments were sold to 28 investors for about $5.9 million as of Dec. 23. Of that, $590,000 went to brokers as sales commissions, and an estimated $900,000 went as a fee to Chief Executive Officer Bryan Kelley and his partner, Ronald Wallace, according to an SEC filing.

Kelley and Wallace didn’t respond to requests for comment. Their company, Webb Creek, did post a response on its website to the announcement of the Senate Finance Committee investigation.

“We are confident that the projects in which we have been involved will withstand close scrutiny and demonstrate clearly that Webb Creek is an exemplary industry participant,” the company said.

Webb Creek, based in Rome, Georgia, “helps in facilitating the placement of conservation easements,” according to its website.

Kelley was one of 14 individuals who received requests from the Senate Finance Committee to provide information for its probe. He wasn’t one of the six subpoenaed.

“It’s like playing a game of whack-a-mole,” said Andrew Bowman, chief executive officer of The Land Trust Alliance, a Washington, D.C.-based association of conservation organizations that has opposed syndicated easements. “The IRS can whack a mole and the Justice Department can whack a mole, but every year there are more moles.”

Two ads run in November in Barron’s, the business publication, said investors in conservation easements could see a $100,000 investment yield up to $600,000 in tax deductions—asking potential investors to call 1-855-TAX-CUT-0.

The sponsored content was placed by Conservation Easement Advisors LLC of Gadsden, Alabama, and its founder, Jason B. Stinson, who is listed as “managing member.” It said that taxable income could be reduced by up to 50 percent per year by investing in conservation easements. Stinson declined to comment. 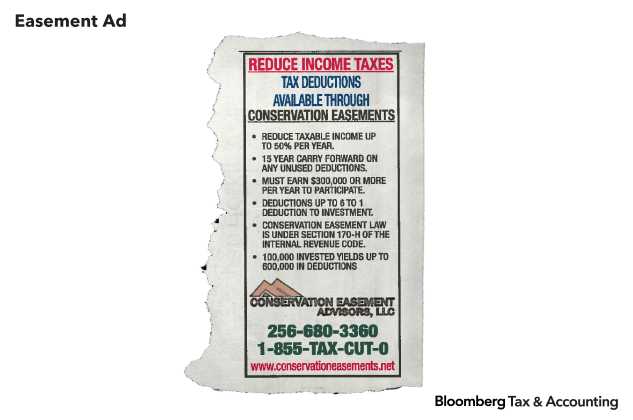 A different kind of promotion for conservation deals appeared last October in Golden Isles, a lifestyle magazine focused on the islands off the coast of Georgia. A column, written by Ben Lee of Coastal CPAs LLC, asks readers: “Looking for a large tax deduction?”

“I use this for my SEC college football coaches that have large W-2 amounts and very few deductions,” he wrote in the magazine.

Lee, a self-described fraud expert, told Bloomberg Tax that his transactions were “conservative” and that his clients weren’t subjected to unreasonable risk. He said such transactions were lawful and investors have an opportunity to make sure they don’t lose money. Investors may “buy insurance” to protect against an IRS reduction in the deduction, he said.

He declined to name any football coaches that may be investors.

To contact the editors responsible for this story: at bkohn@bloomberglaw.com; at pambrosio@bloombergtax.com