Addressing expired or soon-to-expire tax breaks and fixing unpopular errors in the 2017 tax law are high on the list of priorities for lawmakers this fall.
Photographer: MLADEN ANTONOV/AFP/Getty Images

Lawmakers returning from recess this week will begin working on the contours of a tax package that they hope to pass by the end of the year.

They have to grapple with temporary tax breaks known as extenders, which are near and dear to industries but increasingly under attack from economists and political activists. They also will try to regain momentum for a House-passed bipartisan bill (H.R. 1994) to reform the retirement system that is stalled in the Senate.

There are other items in the mix that tax writers want to pursue. House Ways and Means Committee Chairman Richard Neal (D-Mass.) wants to expand the Earned Income Tax Credit and the Child Tax Credit, a legislative change (H.R. 3300) that the committee approved in June.

Ways and Means is also likely to consider a separate clean energy tax package and move forward on a symbolic effort to undo the repeal of the federal deduction for state and local taxes, as well as address expiring health-related tax breaks, aides and lobbyists said.

The committee activity will provide a combination of messaging and negotiations stakes for House Democrats.

Democrats on the committee will formalize their fall agenda early this month. A House working group on repealing the new $10,000 cap on the federal deduction for state and local taxes is expected to chart a path forward on the issue this week, an aide said. The effort will almost certainly be purely symbolic, as Senate Republicans will be loath to undo the limit.

Any tax package would need to be attached to broader legislation—likely the end of year government funding package—in order to pass. What makes it into such a tax package will be subject to heavy negotiations between the Democrats and Republicans.

Congressional leaders may not give tax legislation their full attention until later in the fall, said Jorge Castro, a former Democratic tax counsel.

“Both sides will put their cards on the table in November or December. What can the White House live with, what can Republican leadership live with and what can Democratic leadership live with. It’s just going to be a trading game,” said Castro, now with Miller & Chevalier Chartered. 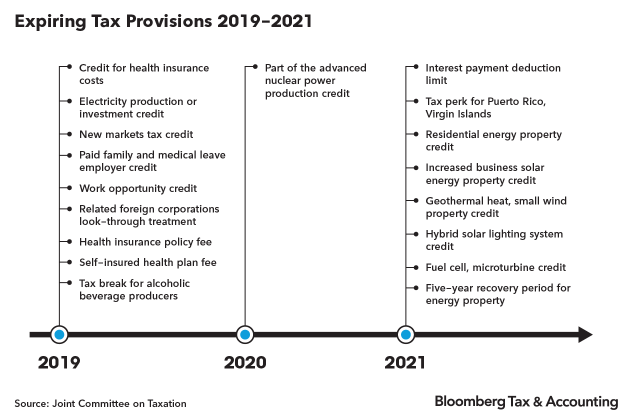 Senate Finance Committee Chairman Chuck Grassley (R-Iowa) is keen to pass legislation to re-up extenders, some of which benefit the biofuel industry, railroads, and motorsports complexes. His first priority is the biodiesel tax credit.

Ways and Means in June approved a package (H.R. 3301) extending perks that expired in 2017, 2018, and several that expire at the end of this year. But it would be paid for by tweaking the estate tax thresholds, something that is unpalatable to Republicans.

Negotiations on an acceptable extenders package are expected to begin this month. Senate Finance could hold a markup as a negotiating tactic, although they have yet to schedule one. Ways and Means Democrats may demand their own energy policy priorities, like extending and expanding the electric vehicle tax credit, be included in an extension of the other tax breaks.

Provisions that are set to expire at the end of this year could carry other smaller items in a tax package, said George Callas, a former top tax counsel to former House Speaker Paul D. Ryan (R-Wis.).

The soon-to-expire measures renewed in the House package include the new markets tax credit, the work opportunity tax credit for disadvantaged workers, the look through treatment of payments between related foreign corporations, and an excise rate cut for the alcohol industry. The work opportunity credit—which ranges from $1,200 to $9,600 per employee—seeks to help veterans, the disabled, felons, the long-term unemployed, and other disadvantaged groups.

“If there’s a feeling that we need to do the 2019 provisions before they actually expire, than I do think they can be drivers,” Callas said.

Finance Committee members have been studying the utility of the perks in six separate task forces. Four of the reports have been released so far. One of the groups called to make permanent a railroad track maintenance credit, under tax code Section 45G, and the Section 179D deduction for energy-efficient commercial buildings.

Cruz has said that he prefers the original version of the bill, which included a provision that would have expanded the use of tax-advantaged education savings accounts to include homeschooling expenses and additional expenses for elementary and secondary education.

“With positive votes in the House and Senate on retirement security, Congress can’t let this opportunity slip away,” Grassley spokesman Michael Zona said in an email.

The retirement bill includes a fix to the 2017 tax law that imposed higher taxes on certain survivor benefits for military families and first responders.

Senate Foreign Relations Committee Chairman James Risch (R-Idaho) said before recess that he is eager for the chamber to approve new tax treaties with Chile, Hungary, and Poland.

Time for a Correction?

Making technical corrections to the 2017 law remain one of the biggest items on Republicans’ tax to-do list. Among them is fixing an error keeping restaurants and retailers from immediately writing off the costs of interior improvements.

Democrats have been hesitant so far, but that could change if the fixes were part of a broader negotiation.

A number of bipartisan bills have been introduced to fix some of the big-ticket technical corrections such as the one that prevents retailers from immediately writing off the cost of interior improvements (H.R. 1869, S. 803).

Another correction would repeal a 21% tax rate imposed on fringe benefits of nonprofit employees, such as free parking and fare for mass transit. The change is part of the family tax credits bill that Ways and Means approved.