President Biden recently introduced a $2.7 trillion spending package designed to be partially offset by an array of corporate tax increases. Those tax changes are justified by the assertion that the U.S. corporate tax burden is less than the OECD average. Kyle Pomerleau of the American Enterprise Institute and Donald Schneider of Cornerstone Macro counter that the figure is misleading and show how the proposed package would bring the U.S. corporate tax burden above the OECD average.

Last week, President Biden unveiled a $2.7 trillion spending package that would be partially financed by additional corporate tax revenue. Arguing in favor of their corporate tax increases, the administration claimed that, even after its proposals, the U.S. would raise less revenue from corporations as a percentage of GDP than our trading partners. This talking point, however, is misleading. After adjusting for the relative size of corporate sectors across countries, we find that the U.S. tax burden on corporations as a share of GDP is about equal to the OECD average, and Biden’s plan would increase the burden to one of the highest in the OECD.

Biden’s plan proposes to raise the corporate income tax rate from 21% to 28%. In addition, it would raise the tax burden on foreign profits of U.S. multinational corporations, enact a minimum tax on book income, eliminate unspecified tax provisions for fossil fuel companies, and increase corporate tax enforcement. Altogether, these tax increases will raise corporate tax revenue by approximately 0.5% of GDP, according to the administration.

This statistic, however, is a misleading measure of the tax burden on corporations. Corporate tax collections do not depend just on corporate tax policy. Some countries may collect a low share of GDP in corporate tax revenue due to having a small corporate sector relative to total GDP.

Once each of these issues is adjusted for, the U.S.’ tax burden on C corporations prior to the TCJA was higher than the OECD average, and the TCJA brought the burden to around the OECD average.

We find that if all countries in the OECD had the same share of net corporate capital income as a percent of GDP as the U.S., the average corporate tax collections would be 1.2% of GDP between 2013 and 2017 (1.3% if weighted by GDP), 0.7 percentage points lower than the pre-TCJA U.S. share of 2.0%. This places the U.S.’ burden the second highest, behind France. The Tax Cuts and Jobs Act reduced the share of corporate tax revenue as a percent of GDP to roughly the same as the adjusted OECD average of 1.3%.

Contrary to what the Biden administration claims, its plan to raise corporate tax revenue would push the U.S. burden higher than the OECD average after adjusting for differences in corporate sectors. Their plan to increase corporate tax revenue collection to 1.8% of GDP would push collections well above the adjusted OECD average of 1.3% and would be the fourth-highest among the countries we examined (although it would still be slightly below the Pre-TCJA average between 2013 and 2017). 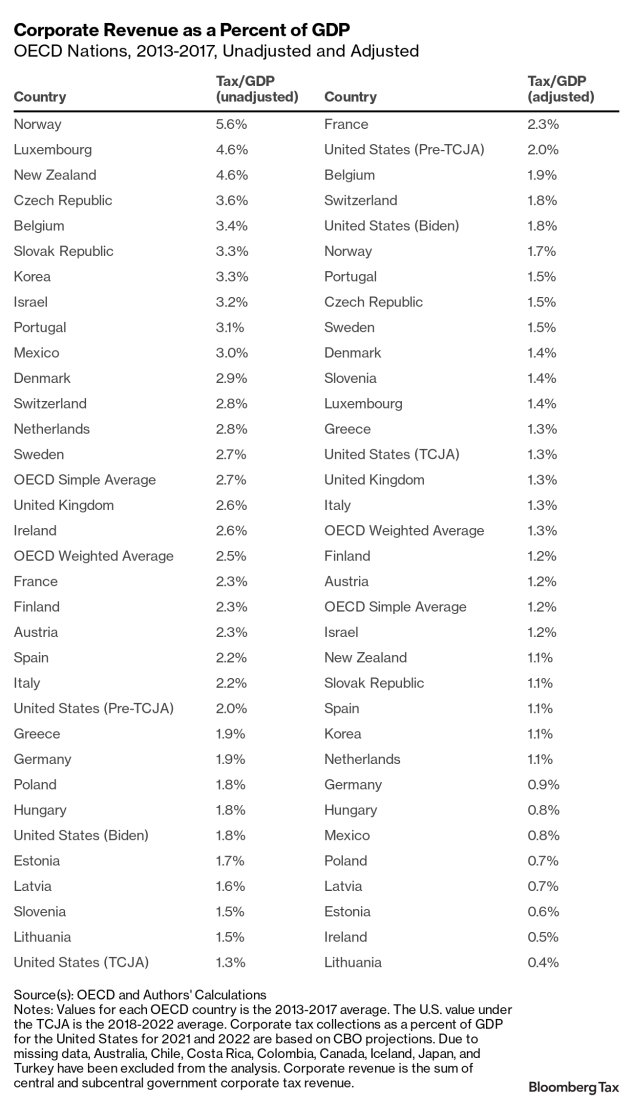 The total tax burden on corporations in the U.S. is about average under current law and would rise well above the OECD average under Biden’s proposal. Yet, this measure is not the only thing that matters. Biden’s proposal would also raise the effective marginal tax rate on investment. This will discourage investment, leading to a smaller capital stock, lower labor productivity, and lower wages and economic output in the long run. In addition, the higher statutory tax rate would increase the incentive to shift profits out of the U.S., and the higher tax burden on foreign profits of U.S. multinational corporations would increase the incentive to engage in corporate inversions.

It is important to provide an accurate look at the effective tax burden on corporations. Comparing corporate revenue collections as a percent of GDP without accounting for differences in the size of the corporate sector is misleading.

Kyle Pomerleau (@kpomerleau) is a Resident Fellow at the American Enterprise Institute and Donald Schneider (@DonFSchneider) is a member of the US policy research team at Cornerstone Macro.