One of the most talked-about tax proposals in 2021 is a proposed 15% minimum tax on large corporations’ book income. But, writes Kyle Pomerleau of AEI, such a tax could increase distortions for some corporations rather than reduce them.

Negotiations over the Build Back Better Act have stopped after Senator Joe Manchin (D-W.Va.) said he would not vote for the current version of the bill. Lawmakers are hoping to restart negotiations over the president’s spending package in January. The current version of the bill includes new spending on family benefits, climate, infrastructure, and healthcare paid for with tax increases on high-income households and corporations.

The largest revenue raiser in the House version of the bill is a 15% minimum tax on large corporations’ book income. The minimum tax is being pursued after lawmakers dropped the proposal to raise the corporate income tax rate. Some proponents have likened the book tax to a “broaden-the-base, lower-the-rate” reform, which reduces distortions by eliminating or scaling back deductions in the tax base. This argument, however, is based on a misunderstanding of how the book tax would impact incentives. The tax can easily increase distortions for some corporations rather than reduce them.

Under the proposed tax, corporations with net income over $1 billion would be required to pay the greater of their ordinary corporate income tax liability, or 15% of adjusted financial statement or “book” income. Certain adjustments, like net operating losses, could still reduce book income, and general business credits could offset book tax liabilities. Additionally, payments of the book tax will generate book tax credits, which would be carried forward to offset future ordinary corporate tax liability.

Under an ideal base-broadening and rate-reducing corporate tax reform, lawmakers would eliminate deductions and credits that reduce corporate effective tax rates and use that additional tax revenue to reduce the statutory tax rate. Such a reform would make the tax code fairer by ensuring that businesses in similar economic situations face similar tax burdens. It would also increase economic efficiency by reducing the influence the corporate tax has over business decisions.

One distortion that a “broaden-the-base, lower-the-rate” tax reform tries to address is the differential tax treatment of various investments. Under current law, the effective tax rate on new investment varies significantly across types of assets—as shown in Column 1 in the table below. Equipment that qualifies for bonus depreciation faces a much lower effective tax rate (-7.7%) than a structure (4.6%), which is typically depreciated over 39 years. Overall, the standard deviation is 13.7 percentage points. This differential tax burden can distort the types of investments that companies make.

Proponents of taxing book income may see it as a way to address this distortion. Under financial accounting standards, companies generally deduct the cost of new investments over the period assets are expected to generate income. Matching the timing of income and deductions for the investment means that a tax will apply, roughly, to the economic income an asset generates. As a result, assets will face an effective tax rate closer to the statutory rate. This means that while the effective tax rate on many investments under a book tax would be higher overall, the tax would result in a more even distribution of effective rates—as show in Column 2 in the table below. 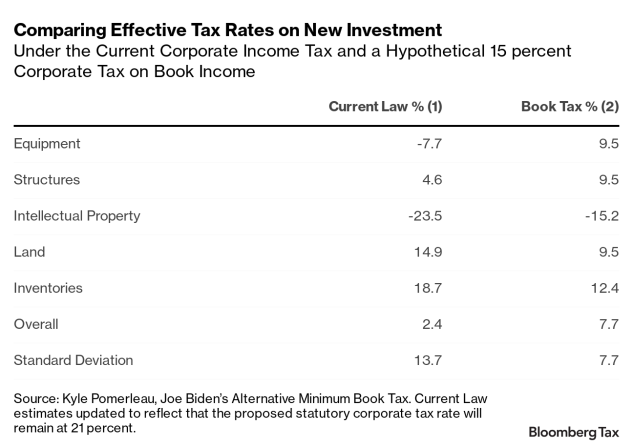 While a corporate tax that applies to book income could reduce the distortion across assets, this is not an accurate representation of how an alternative minimum book tax would impact investment incentives. Companies will not be perpetually subject to either the corporate income tax or the book tax. Rather, corporations will move between the two taxes and experience “spells” under the book minimum tax. Given the different rates and bases of these taxes, the book minimum tax will have somewhat counterintuitive effects on investment incentives. 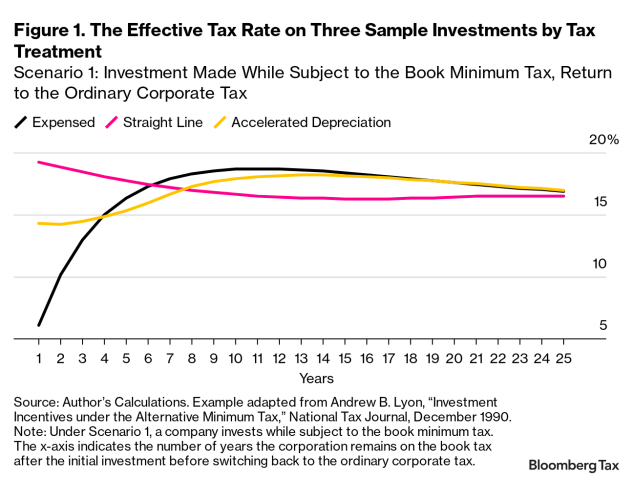 Figure 2 shows the effective tax rate on the same investments, but under the second scenario. In sharp contrast with the previous scenario, assets that qualify for expensing or accelerated depreciation face a lower effective tax rate the longer a corporation expects to be subject to the book tax in years after the initial investment made under the corporate income tax. This occurs primarily because all or most of the deductions were taken against the 21% corporate income tax, but future profits are subject to the lower 15% tax rate. In addition, the company will continue to take depreciation deductions under the book tax for an asset that already received all or most of its deductions under the corporate income tax. 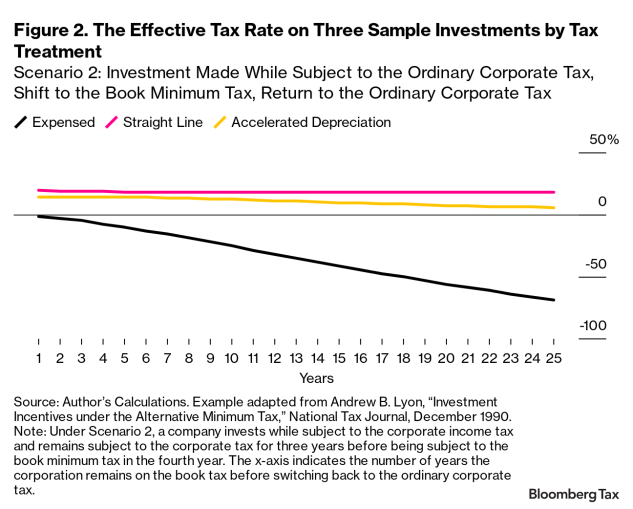 These examples suggest that the impact of the book tax on investment incentives will depend heavily on how corporations interact with the tax. In contrast to how some have framed the book tax, it could increase investment distortions for corporations.

This variation in the tax burden on investment may also encourage additional tax planning by corporations. Companies will have an incentive to time investments to minimize their tax burden if they expect to be subject to the book tax in the future.

The future of the Bill Build Better Act is uncertain, but its highly likely lawmakers will still pursue a minimum tax on book income. The proposal will raise new revenue from large corporations to help finance new spending. Proponents of the minimum tax should be more clear-eyed about how such a tax will impact incentives.

Kyle Pomerleau is a senior fellow at the American Enterprise Institute (AEI), where he studies federal tax policy. The author of many studies, Pomerleau has been published in trade publications and policy journals including Tax Notes and the National Tax Journal. He is frequently quoted in major media outlets such as The New York Times, The Wall Street Journal, and The Washington Post. He has also testified before Congress and state legislators.