Foreigners can secure US citizenship at a reduced cost and pay tax at a reduced rate by moving to Puerto Rico and using the EB-5 Visa program, say Structured Consulting’s Jeremy Babener and Trusts & Taxes’ Roberto Santos.

Wealthy foreigners have unique access to US citizenship through the EB-5 Visa program. For many, investing $1 million in a US business can result in a green card and, two years later, citizenship. But as a leading immigration treatise observes, “The US tax structure is the main disincentive for prospective [immigrants].” Immigrants who accept EB-5 visas must also accept US taxation of their worldwide passive income.

However, for foreigners ready to spend half their time in Puerto Rico, the disincentive can largely disappear. Puerto Rico offers a range of tax incentives, and the IRS has recognized the importance of Puerto Rican “efforts to retain and attract workers and businesses.”

By moving to Puerto Rico through the EB-5 Visa program, foreigners can secure US citizenship at a reduced cost and pay tax at a reduced rate.

As described by USCIS, the EB-5 Visa program was created in 1990 to “benefit the US economy by providing an incentive for foreign capital investment that creates or preserves US jobs.” Each year, up to 10,000 foreigners are granted green cards, and in nearly all circumstances, they gain US citizenship two years later.

Eligibility generally requires an equity investment of $1.05 million in a new or existing US business and for that investment to create 10 or more US jobs. The investment threshold decreases to $800,000 in rural areas and others suffering high unemployment, including Puerto Rico. Investments can be made directly in a US business or pooled with other investments through regional centers.

In 2019, foreigners invested over $5 billion through the program. Nearly 80% of visas were granted to investors from Asia, and 96% were based on investments in regional centers.

Wealthy US residents pay taxes on capital gains at federal rates of 15% and 20%, plus state rates that sometimes add another 10%. That tax can crush the rate of return even for the best-performing portfolio. And for anyone considering the sale of a valuable business, that tax may persuade them not to sell at all.

Notably, interest and dividends received from mainland sources don’t receive preferential tax treatment. This parallels the tax treatment of individuals in other countries. For US tax purposes, the source of such income is the location of the payor. The same is true for gain on the sale of real property. 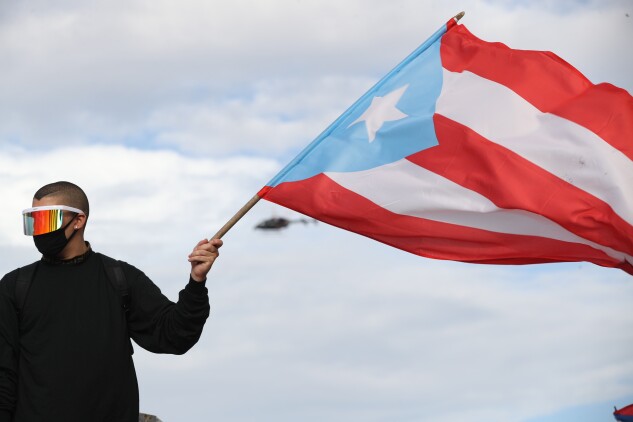 Reggaeton singer and rapper Bad Bunny waves a Puerto Rican flag during protests against Ricardo Rossello, the governor of Puerto Rico, on July 17, 2019, in front of the Capitol Building in Old San Juan, Puerto Rico.
Photographer by Joe Raedle/Getty Images

US business income is often taxed at a combined federal tax rate of 37%, resulting from corporate tax and tax on dividends. State and local tax can increase the total rate to over 50%. Operating the business in Puerto Rico, or even managing it from Puerto Rico, can cut corporate taxes to 4% and dividend taxes to 0%.

The range of eligible services is incredibly broad. The statute explicitly lists generic services like business consulting, research, and development, as well as specific services like training, data processing, and call center services.

These benefits very much depend on the taxpayer becoming a bona fide resident of Puerto Rico; see IRC Sections 933 and 937. In general, a taxpayer must reside in Puerto Rico for at least 183 days of the tax year, have no other tax home, and have no closer connection to the US than Puerto Rico. The second of these rules applies the analysis for deducting traveling expenses; see IRC Sections 937(b)(2), 911(d)(3), and 162(a)(2).

The IRS, believing that some number of individuals have relied on Puerto Rico tax benefits without satisfying these requirements, recently announced a formal campaign to address noncompliance. Anyone considering the use of these strategies should take particular care to become a bona fide resident of Puerto Rico. Michael Hummel, CEO of Establish, which recently moved headquarters to Puerto Rico, said, “We did it right, and our tax savings allowed us to heavily re-invest in our growth.”

Provided one truly moves to Puerto Rico, they can take advantage of its substantial incentives. They’ll obtain citizenship for 20% less through the EB-5 Visa program, and under the right circumstances, cut their tax rate to 4% from over 50%.

Jeremy Babener is the founder of Structured Consulting and previously served in the US Treasury’s Office of Tax Policy. He consults for businesses on strategy, partnerships, and marketing.

Roberto Santos is the president of Trusts & Taxes and advises clients on corporate finance, tax, and immigration. He regularly helps clients identify and evaluate investment opportunities.