The White House and Republican lawmakers made big promises when they passed a sweeping tax law in President Donald Trump’s first year in office, predicting it would boost the economy and make the tax code simpler and fairer.

The Tax Cuts and Jobs Act of 2017, passed with only Republican votes, became the signature legislative achievement of the Trump administration. Tax rates for individuals and corporations were cut, new incentives were created, the standard deduction and estate tax exemption were increased, and the U.S. moved toward a territorial tax system.

Congressional Republicans have touted the law’s success, while Democrats have attacked it as a giveaway to the wealthy and corporations.

In the waning days of the Trump administration, Bloomberg Tax examined the law’s stated goals and explored which of its seven major promises came to fruition.

“The most prominent claims made were often the least serious claims,” said Matt Gardner, a senior fellow at the Institute on Taxation and Economic Policy. 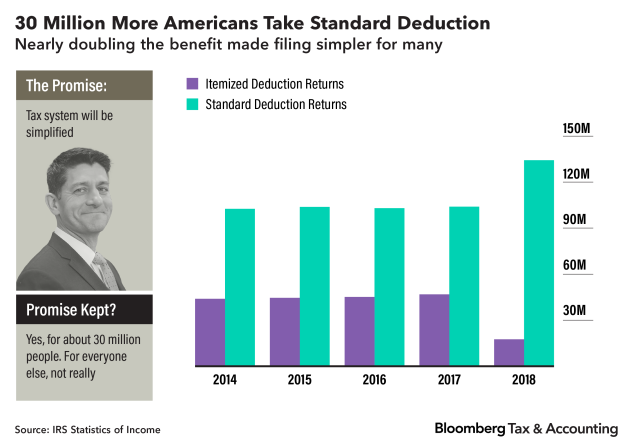 Some aspects of the law did make filing tax returns easier.

For individuals, the law boosted the standard deduction, which allowed millions of people to skip itemizing on their annual tax returns. It also raised the threshold for a parallel system of taxation meant to target people who take an outsize amount of credits and deductions, known as the alternative minimum tax, and eliminated a similar system for corporations.

But other changes to the tax code—such as a 20% write-off for owners of pass-through businesses, and the law’s byzantine international provisions—were far from simple, even before the IRS wrote hundreds of pages of regulations for how to follow them.

Beyond the code, Republicans promised that people would be able to do their taxes on a postcard-sized form. 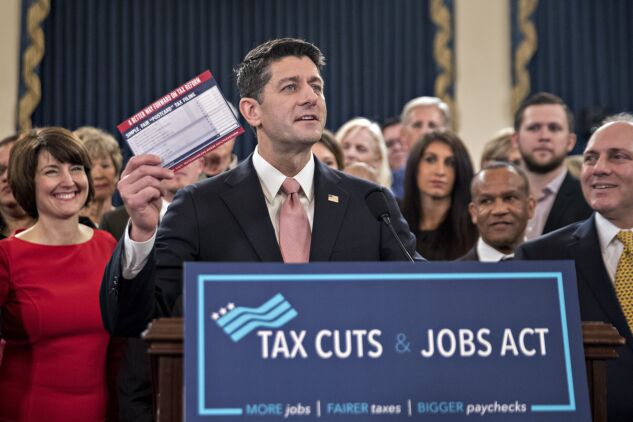 Then-House Speaker Paul Ryan shows off a mock postcard-sized tax form ahead of the law’s passage. The IRS abandoned a modified version of the postcard after a year.
Photographer: Andrew Harrer/Bloomberg

That was somewhat true in 2018, when the IRS shrunk the Form 1040 from two full pages to a small one-page document. However, for that year, lines for reporting income, credits, and deductions were shifted to six separate attached schedules.

Then, in 2019, the IRS reverted to a two-page 1040 form, and the agency reduced the number of schedules to three—somewhat placating accountants who complained that the previous year’s “postcard” was a mess.

Promise: Paying for Itself 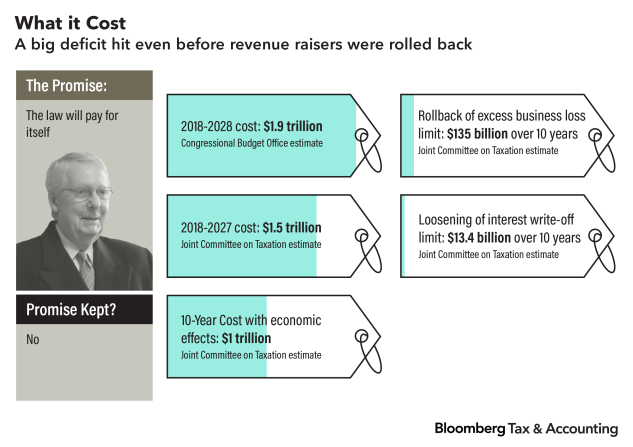 After the law was enacted, Treasury Secretary Steven Mnuchin began to assert that resulting economic growth would generate enough tax revenue for the overhaul of the tax code to pay for itself.

“At the time, economists did not think that was true in any sense, and it’s definitely not true now,” said Eric Ohrn, an assistant professor of economics at Grinnell College.

The claim has since been widely derided, as the law paid for about a fifth of itself, according to an estimate from the Congressional Budget Office.

The tax code overhaul was initially estimated to cost just under $1.5 trillion over a decade. That 10-year window, plus temporary provisions like the lowered individual rates, effectively hid the real cost of the law, some tax experts contend.

Provisions that raise revenue by limiting companies’ ability to write off things like losses and debt interest expenses effectively shifted those benefits past that 10-year window by allowing companies to push unused deductions to future years indefinitely, noted Steve Rosenthal, a senior fellow at the Tax Policy Center.

Last March, lawmakers rolled back some of those revenue raisers to soften the pandemic’s economic blow.

“The TCJA was actually more costly than it appeared,” said Rosenthal. “Because the revenue pickups were timing gimmicks. And then those timing gimmicks were reversed as part of the Covid legislation.” 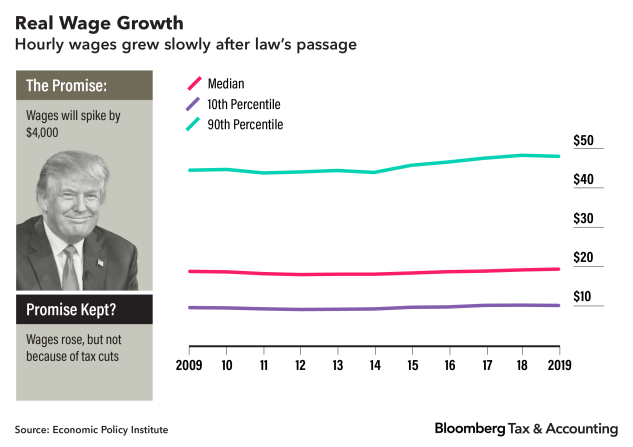 Trump and his economic advisers claimed the tax law would quickly give the average family an extra $4,000 in wages.

In the weeks after the law passed, Verizon, Disney, Walmart, and dozens of other corporations announced one-time employee bonuses. Those benefits turned out to be relatively small, said Jane Gravelle, a senior specialist for economic policy at the Congressional Research Service.

“Nobody was just going to give people higher wages just because they got a tax cut,” she said. “In general economists would not expect an immediate effect on wages from cutting taxes on investment.”

The speed of wage growth has been hotly debated in recent years and depends on which way you measure it, but economists agree the law didn’t cause wages to jump.

Although some say that trickle-down effect takes more time and is difficult to measure over just a couple of years, economists attribute small wage increases ahead of the Covid-19 pandemic to a lack of slack in the labor market during the late growth stage of the business cycle.

“I think lawmakers wanted to see increased investment and to see that trickle down into increased wages, which is more of a longer-term process,” said Kyle Pomerleau, a resident fellow at the American Enterprise Institute. “But I don’t think there’s enough data or time to really assess that.” 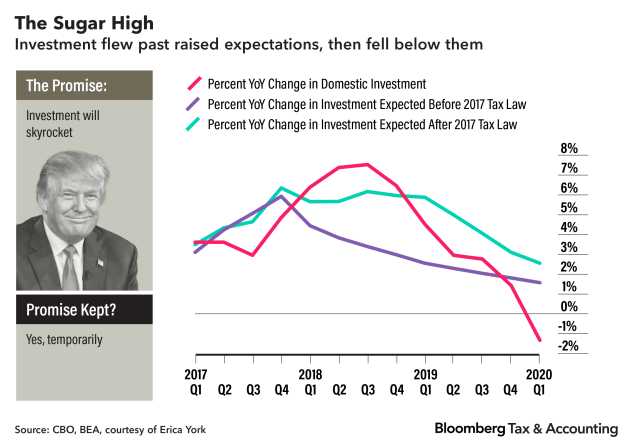 Economists and analysts’ favorite descriptor of the effects of the 2017 tax law is a “sugar high.” When it comes to investment, that’s exactly what happened.

Cutting the corporate tax rate and allowing businesses to fully and immediately write off the costs of equipment and other expenses left companies with more cash to buy things and effectively made those purchases less costly.

Nonresidential domestic investment shot up in 2018—even beyond the CBO’s elevated expectations for after the law’s enactment.

While the Tax Cuts and Jobs Act likely had a hand in this boost, it wasn’t enough to save investment from Trump’s trade war. In 2018, his administration began imposing tariffs on hundreds of billions of dollars worth of Chinese imports, prompting Beijing to retaliate with its own levies on American goods.

“If you look at the actual path of investment compared to the pre- and post-TCJA forecasts, investment for a little while after the TCJA was signed into law beats both of those forecasted amounts,” said Erica York, an economist at the Tax Foundation.

Promise: Business Will Come Back 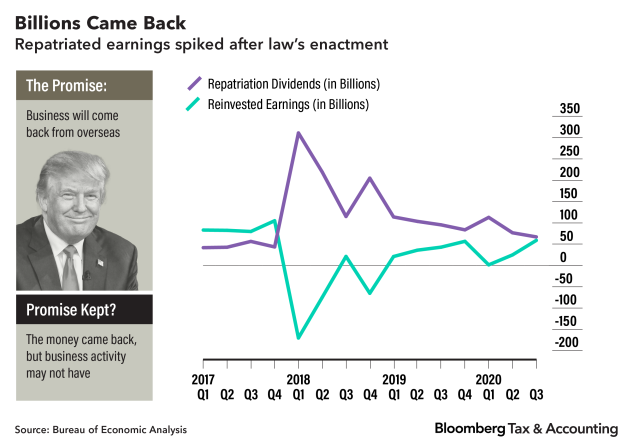 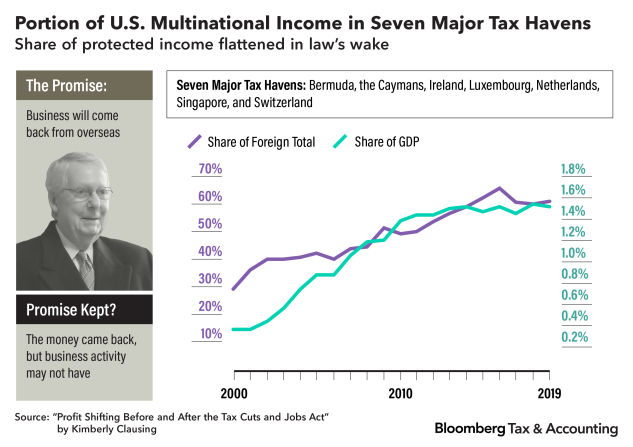 The law made it cheaper to bring back earnings from abroad, while also keeping companies from perpetually avoiding taxes on those profits by “deeming” them repatriated. It placed a 15.5% tax on cash and other liquid assets held by multinationals’ offshore entities, and an 8% rate on other assets held overseas. Normally, those profits would be subject to the corporate tax rate, which at the time was 35%, when brought back to the U.S

Tax professionals who study the effects of the law’s international tax elements say there haven’t been many prominent inversions—in which U.S.-based companies restructure so that they are owned by a foreign parent—in recent years.

But corporations can still be taxed on international profits below the domestic 21% rate, and the law didn’t create the fully territorial tax regime Republicans were aiming for, tax experts said. The law and IRS rules for parts of the international provisions also offer some competing incentives, both encouraging and discouraging a buildup of assets overseas.

“The whole thing was badly structured if the incentive here was to move assets back to the U.S. or create jobs, as opposed to just moving cash back,” said Reuven Avi-Yonah, a professor at the University of Michigan Law School and director of its international tax LLM program.

The amount of U.S. multinationals’ income shifted to seven major tax havens—Bermuda, the Cayman Islands, Ireland, Luxembourg, the Netherlands, Singapore, and Switzerland—flattened out in 2018 and 2019, rather than dropping, found Kimberly Clausing, a professor of economics at Reed College.

The law “is really making the problem better with one hand and making it worse with another, and the two effects are sort of canceling each other out,” said Clausing, who advised the Biden campaign, and has studied companies’ profit shifting before and after the 2017 tax law went into effect. 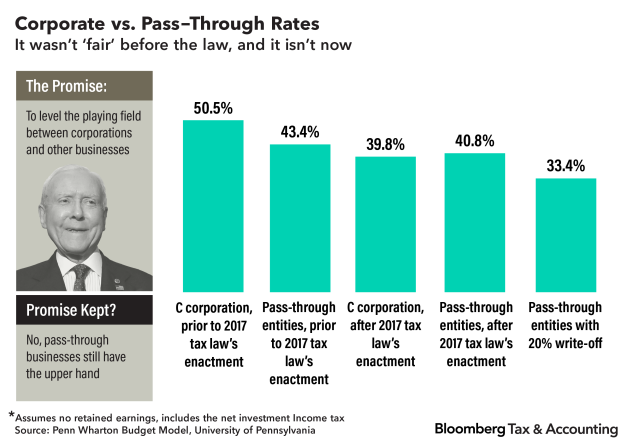 A business’s tax rate depends on, among other things, its structure.

Most businesses are structured as pass-through or flow-through entities, with the owners facing individual tax rates and no tax on the entities themselves.

On the surface, dropping the corporate tax rate to 21% from 35% while only lowering the top individual rate to 37% from 39.6% might seem unfair. So the law includes a special deduction for pass-through owners, allowing them to shield up to 20% of their income from those businesses from individual taxes.

But it isn’t as simple as comparing the corporate and individual tax rates.

After a C corporation’s profits are taxed at the corporate rate, the remaining profits that go to shareholders get taxed at the capital gains rate, too. Depending on how much profit is doled out to those shareholders, the total rate on corporate profits could be well above the individual tax rates pass-through owners faced prior to the tax code overhaul. That’s still the case, albeit to a lesser extent, with that 20% deduction.

“Just in terms of fairness,’ the pass-throughs still have an advantage,” said Richard Prisinzano, director of policy analysis at the Penn Wharton Budget Model. “It’s just been diminished.” 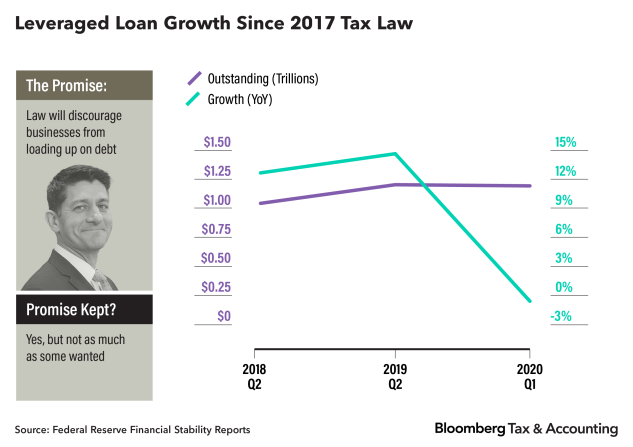 Then-House Speaker Paul Ryan’s 2016 tax overhaul blueprint, which served as a framework for the initial talks about tax reform, emphasized the need to get rid of policies that incentivized businesses to increase their debt load. Ryan’s ideal solution—a full-on elimination of write-offs of net debt interest expenses—didn’t end up in the final package.

The law did limit companies’ ability to use the interest they pay on loans to lower their tax bills, and the corporate rate cut made interest payment deductions less valuable. The interest-write off limit includes a number of exemptions and opt outs. While it is scheduled to narrow next year, a lobbying effort to keep that from happening is underway.

Many companies used an influx of cash to pay down debt in 2018. However, aided by historically low interest rates, the private sector’s debt binge certainly didn’t end with the law.

Janet Yellen, confirmed Monday to serve as Treasury secretary, criticized corporate America early on in the Covid-19 pandemic for carrying an “enormous” amount of debt into the crisis.

“They borrowed excessively in my view through issuing corporate bonds and leveraged loans, many with weak loan confidence and poor underwriting,” Yellen said. “Even where a company avoids default, highly-indebted firms usually cut back a lot on investment and hiring, and that will make the recovery more difficult.”