Federal agencies have allotted more than $53 billion in contract spending related to the coronavirus, with Treasury accounting for $325.7 million of that total, the data show. The reliance on contractors helped compensate for the IRS’s scarce resources and maintain normal operations.

“The IRS has experienced a significant decline in our resources over the years, not being able to hire, so that technical expertise that we need in the IT realm and other areas of our business operations, that’s suffered greatly,” said Kevin McIver, who’s served as the agency’s Covid-19 coordinator and more recently as chief of staff. “While it’s about resources, it was also about the demand we have. Stretching our resources to the brink is something we definitely don’t want to do as we prepare for the filing season.”

The Treasury Department—and the IRS in particular—turned to well-established contractors when workers were forced to leave their offices just as Congress directed them to distribute credits, stimulus checks, and other funds. Still, Shanna Webbers, the IRS’s chief procurement officer, said Covid-related contracts made up just 4% of her team’s total spending for the 2020 fiscal year. 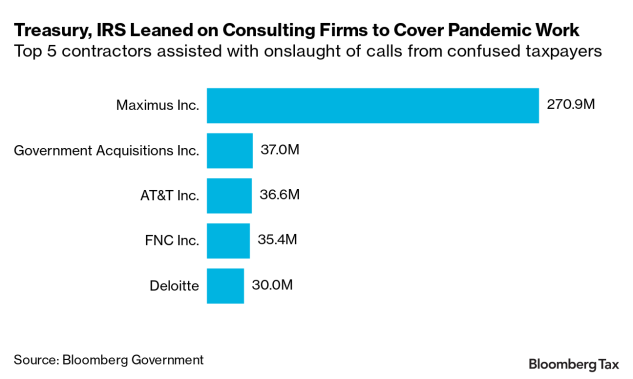 The agency purchased more laptops for remote workers. It approached law firms for services related to the CARES Act’s airline bailout. And it had to act quickly so that staff could maintain operations, Webbers said.

The top recipient of Treasury’s Covid-19 spending, Maximus Inc., was hired to help with a call center, she added.

Verizon was another of Treasury’s top Covid-19 contracting recipients. The telecom giant’s work for the agency included shifting IRS call center employees to remote work while fielding a higher-than-normal volume of calls from individuals with tax filing questions about the delayed filing deadlines last year, among other issues, including with automated responses, said Margaret Hallbach, a vice president at the company.

“There’s a lot of work that goes into changes to the system based on changes to the laws,” Webbers said. “So instead of pulling people away” in the middle of filing season, she added, “it’s just an opportunity to quickly supplement, bring in contractors with specific areas of expertise to handle specific areas.”

Contracting professionals said it makes sense that information technology and telecommunications services would be a major target of procurement funds. The sectors have done well during the pandemic, as much of the U.S. workforce has gone remote.

Information technology was the fifth highest spending area of federal Covid-19 obligations as of the end of September, with $2.6 billion, according to a report from the George Mason University School of Business’s Center for Government Contracting.

The department hired consulting firms like Deloitte, which already had an established procurement relationship with Treasury and staff with the necessary clearance, to shoulder the burden of implementing the $2.2 trillion CARES Act and relief measures in a December appropriations and stimulus law, according to officials and the company.

“When the second round of stimulus payments was enacted, we helped Treasury expedite those payments and families were provided emergency funds in a matter of days,” said Deloitte’s Karen Walsh. “We helped the agency work to implement various IT and business processes that were required to administer tax credits supporting American small businesses that were provided in the federal legislation.”

The booming government contracting business for consulting firms like Deloitte would logically help an industry that doesn’t typically do well in recessions, said Joe Schroeder, an associated processor at the Indiana University Kelley School of Business who focuses on auditing firms such as the “Big Four”—Deloitte, KPMG, PwC, and EY. These firms have shifted to consulting from auditing in recent years, but while auditing is a sturdy business in a downturn, private sector consulting is not, Schroeder said.

“Their private client consulting is declining quite a bit, because private clients can’t pay for it now,” he said. “So to the extent that they’re supplementing that by getting contracts from the government, that makes sense to me.”