President Donald Trump speaks during a news conference at the White House in Washington, D.C. on Sept. 27, 2020.
Photographer: Chris Kleponis/Polaris/Bloomberg

President faces renewed scrutiny of his personal finances just weeks ahead of Election Day, after a report raised fresh questions about his business savvy and the integrity of his accounting.

The New York Times report, published Sunday, portrayed a president in a financial vise who could potentially turn to investments that could threaten his independence as commander-in-chief. Citing tax documents, it said Trump, a billionaire, paid no income taxes in 10 of the past 15 years and only $750 in 2016 and 2017.

Trump on Monday tweeted a retort accusing the media of reporting on his taxes and “all sorts of other nonsense with illegally obtained information & only bad intent.” But he didn’t offer a rebuttal on the substance. The president has repeatedly said he’d release his tax documents only after an Internal Revenue Service audit was complete. 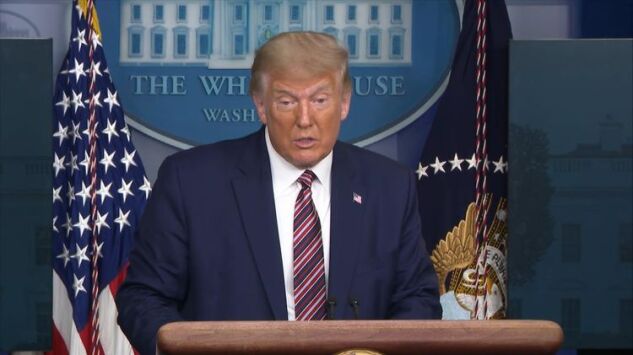 The report offered a catalog of potential improprieties -- citing tax documents -- that threaten to dog the president just as he tries to breathe new life into his struggling campaign with the nomination of to the Supreme Court. It also provides Biden with fresh fodder just ahead of the first presidential debate on Tuesday evening.

“It contributes to this larger sense that we have from Donald Trump that he looks down on working people,” Kate Bedingfield, Biden’s deputy campaign manager, told CNN. “It contributes to a sense that he has a very Park Avenue mentality. Joe Biden grew up in Scranton. His presidency is going to be about helping working families in this country.”

House Ways and Means Chairman , one of the House Democrats who has sued to get Trump’s tax documents, said he is confident he’ll win the lawsuit to get the documents, which he could then make public.

“It appears that the president has gamed the tax code to his advantage and used legal fights to delay or avoid paying what he owes,” Neal said in a statement Sunday.

Meanwhile, a New York prosecutor also has been engaged in a lengthy legal battle to obtain Trump’s records. The Supreme Court ruled in July that Trump can’t use the presidency to shield his tax returns from Manhattan District Attorney , but the case is still being fought in an appeals court and is unlikely to be resolved until after the Nov. 3 presidential election.

The Times reported that the IRS has been auditing Trump for years over a $72.9 million tax refund he claimed in 2010. Senate Finance Committee Chairman said the IRS deserved scrutiny for that.

“The thought that comes to my mind is how come it’s taking the IRS so long to get the audits done,” he told reporters Monday. “I am concerned that the IRS is not getting their work done.”

Trump reported losing millions of dollars from his golf courses and has hundreds of millions in debt that will come due in the next few years, the Times reported. The losses were used to offset any money that he made, according to the analysis of what the Times said were at least two decades worth of the president’s personal and business tax returns.

The documents show that many of Trump’s businesses are struggling, with him putting more money into the firms than he’s taking out, the report said. It also said he earned $73 million abroad in his first two years in the White House, including from authoritarian-leaning countries such as the Philippines and Turkey, despite a pledge that he would pursue no new foreign deals while president.

Trump bucked tradition in refusing to release his personal tax records, which had become standard among candidates for office in recent decades. House Democrats have issued subpoenas for the documents, which have been mired in legal battles for more than a year. The Supreme Court in July said lower courts need to to do more to scrutinize the tax return requests.

The Times didn’t disclose how it got the documents, but said the documents came from sources with legal access to the information. A lawyer for the Trump Organization told the Times that “most, if not all, of the facts appear to be inaccurate.”

Trump’s revenue from the NBC television series “The Apprentice” and from licensing deals is drying up. Several years ago, he sold nearly all the stocks that now might have helped him plug holes in his struggling properties, the Times reported. Within the next four years, more than $300 million in loans -- obligations for which Trump is personally responsible -- will come due, the newspaper said.

Trump has previously said his tax returns are “very beautiful,” but he can’t release the documents while they are under audit at the Internal Revenue Service. Trump’s pick to run the agency, , has said there’s no prohibition on making the documents public while an audit is ongoing.

The report found that Trump has written off a long list of things he classified as business expenses, including $70,000 to his hair stylist while appearing on “The Apprentice,” and more than $95,000 for hair and makeup services for his daughter, , who’s now a top White House aide.

The Times also reported that Trump has treated an estate in Westchester County, New York, as an investment property for tax purposes, despite listing it as a “retreat for the Trump family.”

The revelations into Trump’s financial life are likely to be a key point of contention heading into the final month of the presidential campaign. Trump, who has built his public image as a successful businessman and as a billionaire, faces a series of financial challenges, according to the Times reporting.

(Updates with Grassley comments in the 10th paragraph)