President said he expects to sign orders on Friday or Saturday extending enhanced unemployment benefits and imposing a payroll-tax holiday as lawmakers have been unable to reach agreement on stimulus legislation that includes those measures.

Trump, speaking to reporters Thursday before leaving on a trip to Ohio, said he also expects to sign orders on eviction protection and on student loan repayment. Unilateral action by Trump likely would set up a legal fight over presidential authority.

The president made the comments after House Speaker said talks on a new virus relief package were making progress, though the two sides still have major differences as their self-imposed Friday deadline for a deal looms. 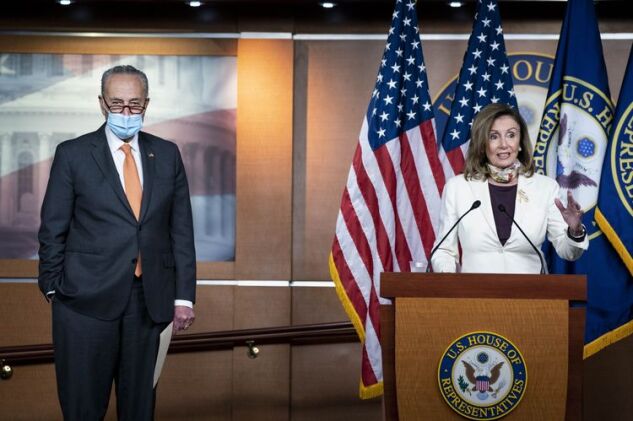 Pelosi and Democratic leader are meeting Thursday with Treasury Secretary and Chief of Staff for another round of negotiations to try to bridge the gap on the cost and breadth of another stimulus plan.

Meadows said before the Thursday meeting that the chances of success in the talks hinge of Democrats’ willingness to dial back their initial $3.4 trillion proposal, noting that they have so far shown no flexibility while his side has offered go beyond the GOP’s original $1 trillion plan.

“I think if we don’t reach a top-line number, there becomes very little incentive to have further conversations,” he said. “At this point, they are still at $3.4 trillion, and going north.”

The Trump administration also has been discussing tapping unspent money from the $2 trillion stimulus passed in March to fund the executive orders.

“There are limitations with what we can do from an executive order point of view, but we will be as aggressive and robust as we possibly can be,” Meadows said. 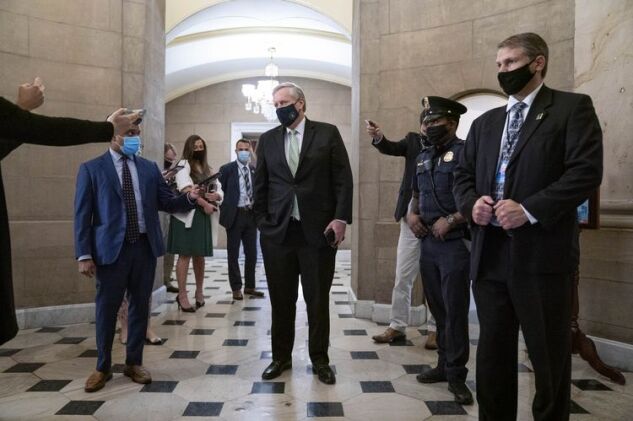 Mark Meadows speaks to the members of the media as he arrives to a stimulus bill negotiation meeting at the U.S. Capitol on Aug. 6.
Photographer: Sarah Silbiger/Bloomberg

All of the unilateral moves face the that the president triggered when he moved last year to deploy some Department of Defense funding to pay for construction of his long-desired border wall with Mexico. Some of the latest plans may simply be posturing, according to Senate Finance Committee Chairman , an Iowa Republican.

“I assume he’s contemplating it to send a signal that he is sick and tired that Democrats are not negotiating,” Grassley said.

For her part, Pelosi said Thursday that she would support Trump extending the eviction moratorium for renters, but additional funding must be approved by . “I don’t think they know what they’re talking about” in looking to tap unspent stimulus money, she said.

After more than a week of negotiations with Mnuchin and Meadows, Schumer and Pelosi said they still have significant differences, including over the enhanced unemployment benefit that was in the last stimulus bill but now has expired.

The talks take on added urgency as time passes. The November general election is 89 days away and economic data show signs that the economy is still hobbling along. The reported that applications for unemployment benefits fell more than expected, to the lowest since the pandemic started. But with claims still exceeding 1 million on a weekly basis, the job market has a long road to fully recovering.

If Trump orders the to temporarily pause collecting payroll taxes, companies will still be responsible for making those payments later. The president can’t unilaterally cut taxes, so Congress would need to forgive those payments before they come due -- something that is far from certain in a divided Congress where even have been resistant to a payroll tax cut.

The executive branch does have authority to delay tax due dates for as long as a year during a declared disaster. Trump’s order would likely face legal challenges because it’s unclear whether he has the authority to require employers to hand over the savings to their employees.

Employers are required to withhold and submit payroll levies on behalf of their workers. That makes them more likely to hang onto that money so they aren’t stuck trying to get it back from staff if the bill comes due. In that event, many wouldn’t even have seen relief, because the money wouldn’t ever have reached their paychecks.

With expanded unemployment benefits, Trump likely would have to redirect money that is already allocated for states and comes with directions from Congress about how to spend it that are sufficiently broad. Federal law requires the administration to spend only the money that Congress has authorized, regardless of what an executive order says.

“To the extent that there is a chunk of money that has been appropriated to the states, that suggests there is some room under the law to proceed,” said Gordon Gray, director of fiscal policy at the American Action Forum.

(Updates with Meadows comments starting in the fourth paragraph.)