Former US President Donald Trump speaks during a 'Save America' rally in Vandalia, Ohio, on Nov. 7.
Photographer: Joshua A. Bickel/Bloomberg

’s tax returns show how the former president used a range of write-offs in the US tax code to pay little or no federal income tax, according to six years of records released Friday by a House panel.

The returns, which include his personal and business filings from 2015 to 2020, are the first complete look into Trump’s tax records for the years he was running for office and in the White House. The release comes just days before Democrats relinquish their House majority, which will end much of their ability to investigate him.

The documents, which have been the subject of litigation for more than three years, shed light on the sources of the former president’s earnings and the taxes he paid — or didn’t.

In 2020, Trump paid nothing in federal personal income tax. He also reported large losses at his businesses in multiple years thanks to favorable deductions that allowed him to minimize his tax bills. Congress’s nonpartisan tax experts have said some of those deductions warrant more scrutiny.

The release on the Friday before New Year’s weekend failed to land any immediate knockout blow Democrats were seeking as Trump seeks another term in the White House.

“We don’t have any smoking gun,” said Sam Brunson, a law professor at Loyola University in Chicago.

Yet even some of the most sophisticated tax specialists won’t immediately be able to tell if Trump followed the law, experts said, because tax returns don’t automatically include some of the underlying documentation that the Internal Revenue Service can request in an audit. Auditors can get a much deeper understanding because they get to see the calculations that back up a number on a return, said Jo Anna Fellon, a tax partner at accounting firm Marcum.

“This is just the tip of the iceberg,” Fellon said. “I’m not sure we’ll ever get the full picture.”

Trump, who fought in court to block the release, said in a statement Friday that the documents show how “proudly successful” he has been as a businessman and touted his wide-ranging use of the tax code, including “depreciation and various other tax deductions as an incentive for creating thousands of jobs and magnificent structures and enterprises.”

The returns don’t show employment levels so it’s unclear if Trump used the tax savings to hire more workers. Tax returns are also intended to report income — not total wealth — so the documents don’t reveal Trump’s net worth. Even business returns only report the purchase price for an asset such as a building, not the valuation.

“Businesses are supposed to be in the business of making money. If they’re constantly losing money, it begs the question of whether they’re real businesses,” said Kevin J. Brady, a vice president and certified financial planner at Wealthspire Advisors based in New York. “It could all be legitimate, but it needs to be looked at.”

The Democratic-controlled House Ways and Means Committee released the returns Friday as part of their investigation into the IRS’s presidential audit program, which found that the agency had failed to examine Trump’s tax returns while in office, as has been done with previous presidents. A report last week summarized Trump’s tax filings and flagged dozens of potential audit triggers that the IRS didn’t pursue.

Trump’s use of business losses to minimize his tax bill is legal as long as he didn’t under-report earnings or inflate the size of the deductions, which can only be determined from a comprehensive audit.

Trump paid no taxes in 2020, reporting losses at dozens of properties and holding companies. The coronavirus pandemic almost certainly played a role. An he owned reported a 69% plunge in revenue in 2020.

Some properties still made money. Losses of $65.9 million at a variety of entities were offset by $54.5 million in gains at others. 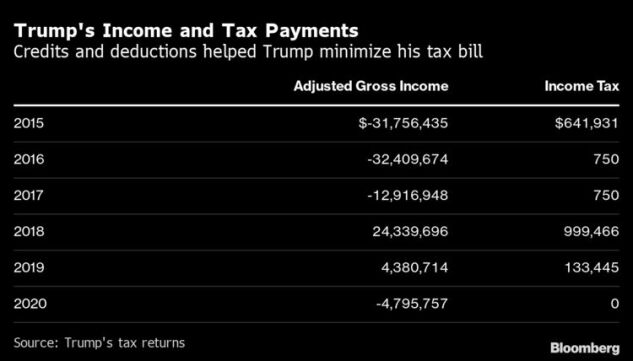 The returns also give more insight into how Trump was affected by his 2017 tax overhaul, which included breaks and expanded write-offs for some top earners.

His businesses benefited from more generous write-offs for the interest on loans, as well as large deductions for equipment. Trump personally benefited from lower rates and a near elimination of the alternative minimum tax, a feature that prohibited many wealthy taxpayers from taking too many credits and deductions. With the change, Trump could claim more write-offs.

“These findings underscore the fact that our tax laws are often inequitable, and that enforcement of them is often unjust,” Representative , a Virginia Democrat on Ways and Means, said in a statement. “Trump was able to bypass even the mandatory IRS presidential audit program for years, but many other wealthy and powerful people evade billions in tax dues every year through more quotidian tax avoidance.”

Representative of Texas, the top Republican on the panel, said that releasing Trump’s tax returns was a grievous mistake and it will lead to the leaders of future Congress’s to publish the tax information of “private citizens, political enemies, business and labor leaders or even the Supreme Court justices themselves.”

“In the long run, Democrats will come to regret it,” Brady, who is not related to the wealth adviser by the same name, said in a statement.

The House passed legislation last week that would mandate that the IRS conduct an annual audit of the president and then release the tax returns and examination results publicly. But the Senate did not act on it before adjourning for the year.

Such a bill would serve as a backstop for future presidential candidates who buck the decades-long tradition of making tax records public during the campaign.

It’s unclear whether it could become law next year. Senate Democrats have pledged to take up the bill, but House Republicans, who will soon have a majority in the chamber, have criticized the proposal.

To contact the reporters on this story:
in Washington at ldavison4@bloomberg.net;
in New York at bsteverman@bloomberg.net