President released his annual budget Monday, proposing deep cuts to social programs but increases in defense and entitlement spending that would push the gross federal debt above $30 trillion over the next decade.

The president’s $4.8 trillion spending plan, posted to the White House’s website Monday afternoon, would increase debt partly because of tax cuts and billions more in spending on defense.

The budget is an election-year embodiment of many of the policy priorities Trump has championed over his first three years in office. Trump proposes continuing his effort to “rebuild” the U.S. military by investing heavily in defense spending -- $740.5 billion in the next fiscal year -- including the creation of Space Force. And the budget for NASA would increase 12% to help underwrite Trump’s proposed manned missions to the Moon and Mars. 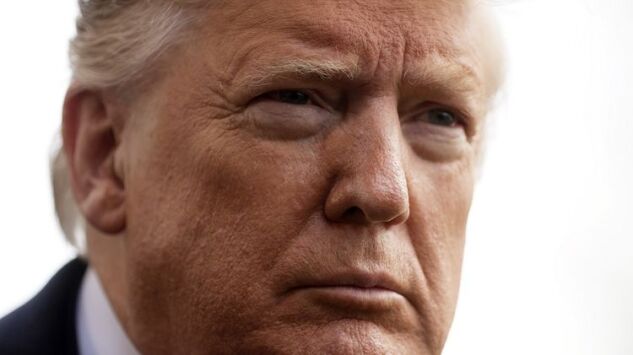 The budget includes significant changes to Medicaid and stringent new work requirements for safety net programs. The president calls for deep cuts to government programs he believes are unpopular with his base, slashing discretionary spending by 5% -- down to $590 billion -- in the coming year. That includes major reductions in foreign aid -- with the State Department and international programs cut 7.7% -- and the Environmental Protection Agency reduced by 26.5% next year.

The annual budget produced by the White House reflects the policy aspirations of the incumbent administration but has no binding power, since federal spending is appropriated by Congress. Lawmakers aren’t expected to finish work on 2021 spending levels until after the November election. And the White House move to change two-year budget cap levels negotiated with Democrats last summer could make an eventual spending deal more difficult.

Democrats quickly took aim at Trump’s proposed cuts. “The budget is a statement of values and once again the President is showing just how little he values the good health, financial security and well-being of hard-working American families,” House Speaker said in a statement Monday.

Trump’s budget shows the president drifting further away from his campaign pledge to eliminate the U.S. national debt by the time he leaves office, even as he envisions discretionary spending shrinking to a mere 1.6% of GDP in 2030 -- about half its current level. 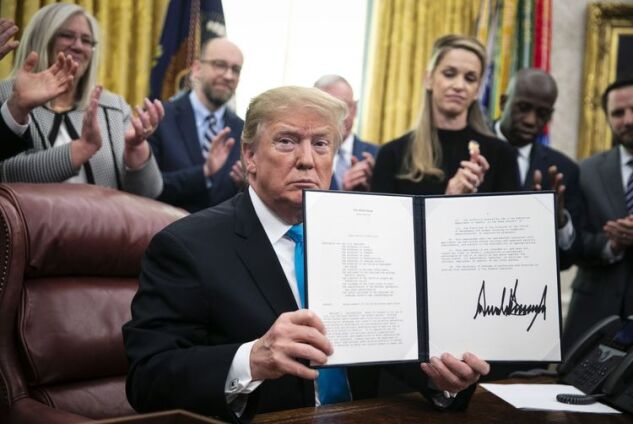 Trump displays a Space Policy directive during a ceremony at the White House in 2019.

Most Republican presidents have released budgets they say would balance the budget within a decade, though this is the third consecutive plan released by the White House that fails to reach that goal. Only once a budget is in surplus can the underlying debt be paid down.

Still, Trump’s plan cuts spending below current levels, leading the deficit to decline to $966 billion next year and the deficit to shrink to 0.7% of GDP by 2030, according to the White House. That’s below the $1 trillion projected by the nonpartisan Congressional Budget Office under current policies.

Russ Vought, the acting director of Trump’s Office of Management and Budget, blamed Democrats on Capitol Hill for Trump’s inability to balance the budget.

“The Democrats on Capitol Hill have refused to consider the spending reforms the president has put forward,” Vought said Monday in an interview with Bloomberg Television.

The Congressional Budget Office projects that without the policy changes Trump is advocating gross federal debt would rise to $36 trillion in 2030 from $24 trillion in 2020 -- substantially higher than the more than $30 trillion projected by the White House. Debt held by the public would rise from $18 trillion to $31 trillion.

“He now leaves it to future presidents and congresses to achieve fiscal sanity,” said , a former Senate budget aide now with the Bipartisan Policy Center.

‘Who the Hell Cares?’

Trump has shown little of the traditional GOP concern about deficit spending. He dismissed concerns by some fiscal conservatives at a fundraiser in January in Florida.

“Who the hell cares about the budget?” Trump said in a recording of the closed-door remarks obtained by the Washington Post. “We’re going to have a country.”

The president’s plan anticipates significant savings through a series of cuts and changes to programs designed to assist the nation’s most vulnerable citizens.

Those include: $135 billion in a drug pricing overhaul; $292 billion from adding a work requirement to welfare programs; $170 billion from changing student loan laws; and $266 billion from “site neutrality” rules that would have the government pay the same amount for medical services in hospitals and doctor’s offices.

While the president has vowed he would not cut Social Security or Medicare, his budget envisions savings from the health care program by “eliminating wasteful federal spending” and other changes Democrats argue could ultimately decrease coverage or benefits.

“A lot of these are smart, thoughtful reforms. Many are bipartisan, and versions appeared in Obama budgets,” said Marc Goldwein, senior policy director at the Committee for a Responsible Federal Budget, a watchdog group. “A number of them would actually reduce costs or improve the situation for beneficiaries of the programs, as well the budget.”

The proposals are already drawing criticism from Democrats, who said the president is looking to kick needy people off government assistance programs.

“These deep cuts send a clear message to the American people about the Trump administration’s warped values and misplaced priorities,” said Representative of New York, chairwoman of the House Appropriations Committee. “I look forward to working with my colleagues to reject this proposal and instead invest in America’s working families.”

Each chapter of the budget released on Monday includes an outline of programs and projects the administration has deemed wasteful. The proposal targets many of the same areas Trump has sought to cut in years past: foreign aid, the EPA, and public broadcasting.

The Commerce Department is targeted for one of the largest reductions -- more than 37% -- after a one-year surge to pay for this year’s decennial census. Trump has also zeroed-out funding for examining the creation of a permanent nuclear waste site at Nevada’s Yucca Mountain. Trump announced his plan to abandon the project in a tweet last week, in what was interpreted as a bid to court Nevada voters ahead of the 2020 election.

The White House also anticipates saving $89 billion over the next decade by modifying retirement and health benefits for federal employees, and $91 billion by reforming the Postal Service.

The administration isn’t proposing a special allocation of funds to combat the , according to a senior administration official who requested anonymity to discuss the document before its release. The virus has led to more than 800 deaths worldwide and sparked quarantines of travelers coming from China, where the outbreak started.

Proposed funding for the Centers for Disease Control and Prevention would be cut 10%, but the budget leaves untouched the $4 billion allocated for its work on infectious diseases.

Some agencies get a boost under the president’s proposal, including NASA, whose spending would rise 12% in the coming year. That additional funding would be targeted toward the president’s goal of returning to the Moon by 2024, with the aim of later attempting a lunar launch of a manned spacecraft bound for Mars.

Another of the president’s major priorities -- the border wall with Mexico -- would receive $2 billion in funding next year. That’s down from $8.6 billion requested a year ago, but the senior administration official said that with funding for 1,000 miles of wall already secured, the administration needed less in the upcoming year.

Paid parental leave, a major priority of , the president’s daughter and senior adviser, would receive $21 billion in funding over the next decade. The White House has earmarked $45 billion for a program that would provide a tax credit for donations to state-based scholarships that allow students to attend private schools.

The budget again includes $1 trillion for infrastructure spending, modeled on combining legislation proposed by GOP Senator of Wyoming with a $200 billion fund for “nationally significant projects.” The remainder of the funding would be secured through public-private partnerships and state and local spending, the official said. The White House would replenish the depleted Highway Trust Fund through cost savings in other areas of the budget.

Trump’s budget also assumes that the economy will continue to get stronger. The outline projects the economy will grow 3.1% in the fourth quarter of 2020 compared with a year earlier, and then expand at a pace of 3% for the coming years, only cooling toward the end of the decade.

The estimates are far more optimistic than those of most economists, and the administration failed to hit its own projections this year, despite surging stock markets. A recent of 71 analysts anticipated U.S. GDP growth at 1.8% in 2020 and 1.9% in 2021.

The senior administration official said the U.S. fell short of projections in 2019 because of ’s issues with the 737 MAX jet, the GM autoworkers strike, flooding in the Midwest, and investor uncertainty about trade deals with China, Mexico and Canada.

The budget also forecasts the 10-year Treasury yield will average 2% in 2020 and grow more slowly than previously projected over the next decade, reducing the costs of interest payments. The administration official said the predictions were in line with outside analysts.

The spending plan predicts Trump will succeed in passing his still-to-be-unveiled overhaul of the nation’s health-care system, banking $567 billion in savings over the next decade. Despite pledging to repeal Obamacare, the White House has yet to propose an alternative that has gained enough congressional support.

The budget also assumes that lawmakers will extend the president’s tax cuts, which are set to expire in 2025, and that Trump will continue negotiating trade deals on better terms for the U.S. economy.

Presidential budget requests are typically treated as “dead on arrival” by Congress. But Trump’s willingness to circumvent Congress on budget matters -- including holding up foreign aid and diverting military construction funds to build his wall -- arguably make the blueprint more relevant.

Still, many of the president’s proposed changes face long odds on Capitol Hill, where Democrats control the House and are unlikely to accept his cuts to social welfare programs. They’re also likely to insist on adhering to an existing spending agreement that sets defense spending for the coming year at $741 billion and non-defense spending at $635 billion.

The fact that the White House proposal tears up the two-year budget caps deal inked by Speaker and Treasury Secretary last summer as part of a debt ceiling deal could presage an ugly showdown after the November elections.

Congress isn’t expected to complete spending bills for fiscal 2021 which starts Oct. 1 until after the November election since Democrats have incentives to wait and see if they can unseat Trump. If Trump wins re-election, however, he’d have greater leverage to try to force House Democrats to accept his new proposed spending levels.