This is part five of a deep dive into the problems plaguing the Internal Revenue Service. We asked current and former government officials, agency watchdogs, and tax professionals to break down how the agency landed in such a dire situation and offer their plan for how it can be fixed.

Catch up on the rest of the series here.

A tax collector is never going to be loved.

Former IRS commissioner remembers then-Treasury Secretary Steven Mnuchin telling him near the end of his term, “There isn’t any third grader who said ‘when I grow up, I want to be the IRS commissioner.’”

Any blunder the IRS makes can contribute to mistrust in the agency, at a time when some people in the U.S. are generally skeptical of government. That lack of trust adds political obstacles as the IRS seeks more funding from Congress, particularly for enforcement.

“A large portion of the reason that I’m significantly interested in becoming commissioner is to rebuild the trust in that agency, to confirm to the American taxpayers that the Internal Revenue Service is impartial, nonbiased and colorblind for all purposes,” current Commissioner said during his Senate confirmation hearing.

Rettig came to the agency in 2018 with decades of experience as a Beverly Hills-based tax attorney, billing himself as someone intimately familiar with the difficulties taxpayers face in dealing with the agency. The next year, Congress passed a broad reform law that called for the IRS to improve its customer service.

And yet, the IRS is still struggling. The last three filing seasons were marred by the return backlog, confusing tax code changes, and many times more phone calls to IRS help lines than the agency can handle. 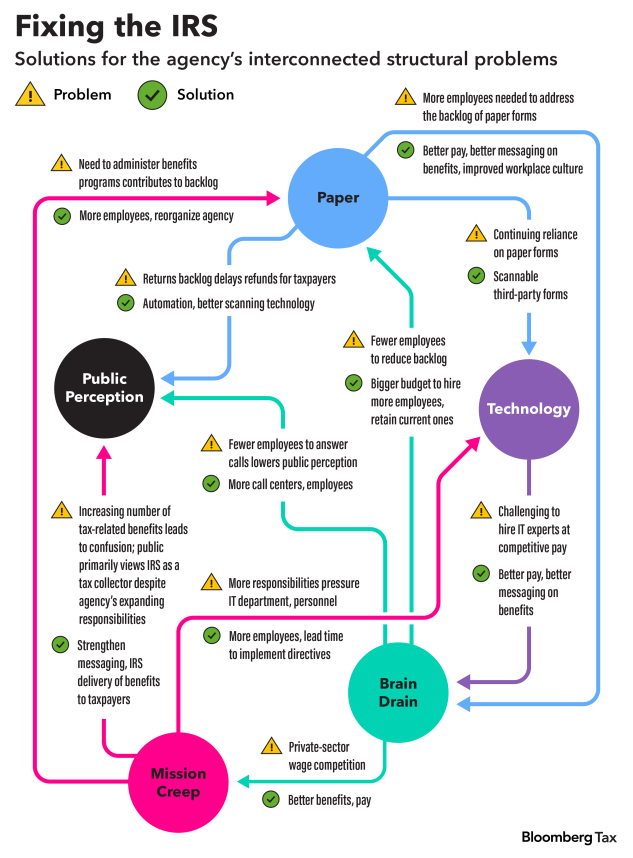 Leaders of taxpayer groups said the agency could improve its image just by strengthening taxpayer services, particularly on its phone lines. Still, stakeholders said the IRS misses opportunities to explain the value it provides, isn’t always forthcoming about the challenges it’s dealing with or how it plans to address them, and often lets itself be put on the defensive.

When the IRS’s use of a third-party company for facial recognition technology to authenticate taxpayer accounts became known, for example, it “got caught flat-footed with some questions from privacy advocates, and they flubbed their response,” said Pete Sepp, president of the National Taxpayers Union, a right-leaning advocacy group.

The agency subsequently announced in February that it would transition away from the technology.

The incident is illustrative of times when the agency makes a communication error and it leads to a “blow-up,” Sepp said.

Terry Lemons, IRS communications and liaison chief, said the agency’s messaging focus is on getting crucial information to taxpayers. The agency has significantly expanded its communications, outreach and social-media efforts during the pandemic, he said.

“Our core focus of all of our team over here is helping people, and that means focusing on the bottom line of getting people information, getting people what they need, working with partners,” Lemons said. “A lot of that doesn’t make headlines; a lot of people may not be aware of it.”

Privacy and identity theft is a “very passionate issue for many people,” Lemons said, and is the type of issue where the IRS is likely to be criticized no matter what it does. He said the IRS has “struck the right approach” over the past few months while providing information to taxpayers about how to protect themselves from identity theft.

The Biden administration has regularly communicated to the public about the challenges with this year’s filing season. But the IRS tends to keep challenges to itself in hopes it can fix them, said former National Taxpayer Advocate Nina Olson.

As a result, potential risks aren’t always well communicated up the chain of command, the IRS minimizes issues until they can’t be ignored, and then it doesn’t share sufficient information with the public, she said. If the IRS was more forthcoming, the public might “be frustrated, but they would have a better understanding of why this stuff is happening,” said Olson, now the executive director of the Center for Taxpayer Rights.

Those familiar with the agency said the IRS could better communicate how taxpayers can help themselves.

Sepp noted that the IRS created an online tool that nonfilers could use to register for stimulus payments.

“When the Service can say, ‘Hey, we’re doing something to make an unpleasant experience a little less difficult,’ they win,” he said.

Rettig has repeatedly highlighted that the agency collects about 96% of the U.S. government’s gross revenue.

“I’d encourage you to thank IRS employees,” Rettig said at a March conference. “Thank everybody involved in tax administration.”

But current and former IRS officials said the agency could further hammer home this message.

“Most people, unfortunately, associate the IRS with paying taxes in a negative way. And I do think if you were going to change the branding of IRS, I think it needs to do a better job as an agency explaining the benefits that it provides,” said Erin Collins, the current taxpayer advocate.

“Without the IRS doing its job, the country would not be able to function,” Collins added.

Lemons said that message is “in our DNA” and the IRS focuses on raising awareness of it, but that the agency’s main responsibility is helping taxpayers.

Koskinen said there is value in agency officials holding press conferences and taking questions from reporters. Otherwise, the IRS loses an opportunity to “try to get people to understand this is who we are, this is what we’re trying to do,” he said.

Justin Joseph, an associate professor at Boston University who specializes in public relations and crisis communication, said having someone at the IRS have more of a public presence, and having a network of people to talk about the IRS’s work, would give the agency a human face.

Lemons said that the IRS has to go beyond talking to reporters at traditional print news outlets in order to get its message to taxpayers, because the media environment has dramatically changed in recent years.

That often means partnering with community organizations and companies to get information to taxpayers, especially those who tend to distrust the federal government or are skeptical of the agency, such as immigrant communities. The agency is focusing on social media and outreach efforts that have included interacting with a majority of U.S. schools, preparing fliers that appeared in food banks and working with billboard companies to get free placements.

“Taxes are complex. The issues we’re facing are complex. And at the end of the day, you have to have a multiple of array of things going on to share information,” Lemons said.

Republican lawmakers criticized the agency during the Obama administration over its handling of conservative groups’ applications for tax-exempt status. More recently, Republicans have seized on unauthorized disclosures of confidential tax documents of wealthy Americans to the news outlet ProPublica, and the lack of information about the status of federal investigations into the matter.

“The IRS has not been trusted with the money they have been provided. There have been multiple scandals involved over the years,” said Rep. Jody Hice (R-Ga.) said during an April 21 hearing. “And yet Democrats continue to want to throw more money with less oversight. These are not the appropriate ways to go.”

Investigations into the disclosure are being conducted by the Treasury Inspector General for Tax Administration and other agencies outside the IRS. A spokesperson for TIGTA said it had no comment about the status of the investigation, and given that probes are ongoing, it’s not clear how much the various federal agencies involved could comment.

Lawmakers and others familiar with the agency say the IRS must take actions to prevent unauthorized disclosures of private information.

“You don’t restore credibility until you are able to say what happened and what are you doing about it,” said Mark Everson, who served as IRS commissioner from 2003 to 2007 and now serves as vice chairman of alliantgroup, a management consulting firm.

Lemons said that the agency works to stay out of political debates.

“We are not a political organization, so by nature those political discussions about size and role of government are kind-of outside our lane,” he said. “What our lanes are are to share information to help people meet their tax obligation.”

To contact the editors responsible for this story: at PAmbrosio@bloombergindustry.com; at bkohn@bloomberglaw.com