The U.S. flag flies above the the Treasury Department building. Overseas enrolled agents licensed by the department have increased in recent years, as the U.S. focuses on tax compliance on a global scale.
Photographer: Andrew Harrer/Bloomberg via Getty Images

The number of Treasury-licensed tax advisers with foreign addresses has increased almost 50% since 2016, IRS data shows, reflecting the agency’s growing efforts to crack down on tax avoidance overseas.

The majority of active foreign-based enrolled agents reside in India, the U.K., Canada, China, South Korea and Japan, according to the data. In total their numbers—which include U.S. and non-U.S. citizens—have surged from 2,078 in 2016 to 3,083 as of late September 2019.

“There’s an unmet need abroad,” Jeff Trinca, vice president of Van Scoyoc Associates in Washington, said in explaining the trend. Trinca is a member of the National Association of Enrolled Agents.

Enrolled agents are licensed by the Treasury Department to represent taxpayers before the IRS at all administrative levels—examination, collection and appeals. They can also file tax returns on behalf of their clients.

Taxpayers increasingly needing that assistance include Americans living abroad, or U.S. expatriates. Expatriates are required to file a U.S. return, even if they don’t owe any U.S. tax because they can claim credits for taxes they’ve paid overseas—among other benefits. Foreigners with U.S. investment interests also have U.S. filing requirements. 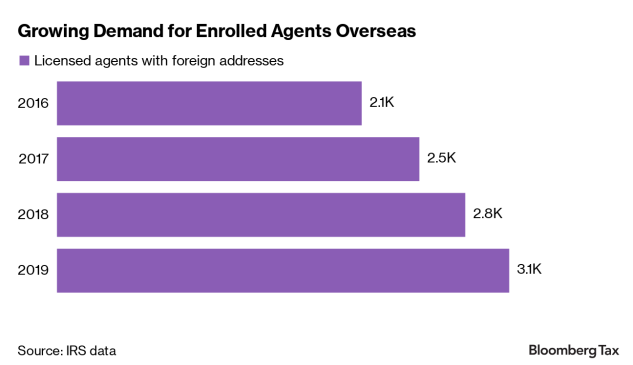 The increase in foreign-based enrolled agents is due in large part to the Foreign Account Tax Compliance Act, which requires foreign banks to report assets held by U.S. account holders, according to tax professionals. FATCA was enacted in 2010, but only within the last few years have most banks had to start fully complying with its requirements.

FATCA has put more U.S. expatriates who may not have been filing their U.S. taxes on the IRS’s radar, said Frank Agostino, founder and president of Agostino & Associates, P.C. This includes “accidental Americans” who have U.S. citizenship because they were born in the U.S. but don’t identify with that nationality because they have mainly lived abroad.

A program allowing the IRS to ask the State Department to deny or revoke passports of taxpayers with “seriously delinquent tax debt” of $52,000 or more has also increased demand for U.S. tax assistance abroad, said Agostino, who previously worked as an attorney at the IRS. The agency began implementing the program at the beginning of 2018.

“That’s why there’s so much of a new interest,” he said. “It’s really because the IRS has gone global.”

‘Flavors of the Month’

Although the numbers of foreign-based enrolled agents are increasing, they face unique challenges in their roles.

For starters, tax preparers have to provide a Social Security number or an individual taxpayer identification number (ITIN) to get authorized to file returns on behalf of clients electronically.

This can be an issue for enrolled agents overseas who may not have those identification numbers, said Liz Zitzow, an enrolled agent based in the U.K. Zitzow is the managing director of British American Tax and an NAEA member.

Calling the IRS by phone can also be difficult for that reason, she said. The agency in January 2018 began asking taxpayer representatives for their Social Security numbers when they call in to verify their identifies and protect taxpayer information.

Despite these challenges, Agostino said he expects the demand for foreign-based enrolled agents to continue to grow if the IRS continues on its current path.

“With the IRS you sometimes have these flavors of the month—they identify an enforcement area and then they back off,” he said. “I have no reason to believe they would back off on international.”