When the U.S. government needed to get an unprecedented sea of cash to small businesses, it tapped banks to get the job done -- a task Wall Street hoped would help repair a reputation that remains damaged from the 2008 financial crisis. Then reality set in.

Work on the coronavirus relief program, spearheaded by a federal agency ill-equipped to speed billions of dollars out the door, quickly spun out of control. Amid technology crashes and multiple updates to the lending rules, the spigot slowed and caused an outcry from borrowers desperate for lifelines. As critics looked to cast blame, there were easy targets: , , and other large lenders.

Those firms are getting assailed on Capitol Hill, beaten up on social media and sued by angry borrowers. The Small Business Administration even temporarily shut Wall Street out of the loan effort on Wednesday, allowing applications only from small community banks to give them a larger share of the final chunk of the $670 billion in funding.

“What we did in 2008 is not lost on us,” said , president of the Consumer Bankers Association, a lobbying group for large and mid-sized lenders, including those that have come under fire. “This is our time in 2020 to show America that we wanted to lead in this crisis, and the process at times has been so utterly frustrating.” 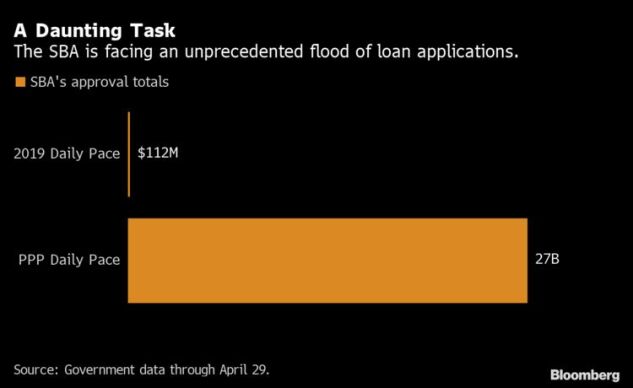 The Trump administration has deemed the Paycheck Protection Program a success and crowed about getting much needed money into the hands of tens of millions of small business workers. But the largest banks are concerned that the legacy for them will include a flurry of litigation and state and congressional investigations. For that, lenders blame lawmakers, the Treasury Department and SBA for how the program was designed and implemented.

This overview of lenders’ frustrations with the coronavirus loan initiative is based on more than a dozen interviews with bank executives, industry lobbyists and government officials. Most asked not to be named to speak candidly about their experiences.

All banks have been doing, they say, is handing out the money. Under the $2 trillion Cares Act passed by Congress in March, the loans are guaranteed by the SBA and meant to be forgiven as long as they are used to pay workers, mortgage interest, rent and utilities.

Big banks know they aren’t likely to get much sympathy for their complaints, especially when mom-and-pop businesses are struggling to survive. And some of Wall Street’s pain has been self-inflected by moves like aiding well-heeled clients before customers with smaller accounts.

In addition, the 5,000 or so banks working on the SBA effort are being paid for their work, though there is dispute about whether it will end up being a profitable venture. Wells Fargo has said it plans to donate its fees to nonprofits that serve small businesses, and JPMorgan said Friday that it doesn’t intend to make any money off of PPP.

Still, the industry’s collective fees could run into the billions of dollars, said , policy director at Americans for Financial Reform, a Washington-based group often critical of Wall Street banks. That should have motivated banks to be more thoughtful in distributing funds, rather than prioritizing their profitable existing clients, he said.

Many of the program’s issues have arisen at the SBA, an understaffed agency that has never faced such a massive job. In fiscal 2019, for example, it approved just $28 billion of loans. The flood of applicants wreaked havoc on the agency’s software, often causing loan processing to grind to a halt.

During the second round of funding, the SBA also restricted banks to sending in 350 applications an hour, a requirement that’s not ideal for large lenders whose systems can push through applications much faster in greater volumes. Alongside that requirement, the SBA said banks could submit batches of thousands of loans, which the largest firms did take advantage of.

It turns out the 350-application limit was an ambitious goal at times. Wells Fargo’s head of small business, , said in an internal memo Tuesday that his bank had been able to submit just 80 applications per hour. “While that pace is more than a little frustrating for us all to see, we’ve heard from peers across the industry and they are seeing similar or worse response rates,” he wrote.

The industry also noted that SBA and the Treasury issued more than a dozen revisions to the program –- many while loans were going out the door. And the agencies refused to take some industry suggestions -- like relaxing required anti-money laundering checks -- that slowed lending and made it challenging for banks to service anything but existing customers.

Privately, much banker scorn has been directed at Treasury Secretary . They say he spurred a massive rush for loans by deeming them first-come, first-served and set unreasonable expectations for many businesses by repeatedly saying there was enough money in the program after Congress passed a second round of funding. Lenders in contrast suspected that the money would run dry. By Friday afternoon, however, banks were more optimistic that they could serve all applicants.

A Treasury spokesman pointed out that any revisions or lack of guidance didn’t stop the PPP program from providing some $350 billion in loans in the first two weeks it was operational. The SBA is continuing to quickly process requests and has enough money to fund large batches of loans sent in by the big banks, the spokesman added, noting that overall the program is expected to aid 60 million workers.

As the rules kept changing, banks and their lawyers began fielding anxious requests from large public companies that wanted to give money back because they were being shamed on social media. The public fury contributed to the SBA’s decision to kick all but the smallest banks out of the program on Wednesday for several hours.

“With the SBA blocking nearly 800 banks, relief for potentially thousands of small business owners and their employees will be delayed,” Financial Services Forum President , whose group represents the chief executive officers of Wall Street lenders, warned in a statement. “A better solution would be a fully operational system that allows banks of all sizes to provide support to Main Street.”

To be sure, the largest lenders do point to some successes from the program. JPMorgan announced Friday that it has secured $29 billion in funding for over 239,000 small businesses. Bank of America said in a memo earlier this week that it sent 184,000 applications at the start of the second round, while Wells Fargo said it sent over 100,000.

But with that activity has come scrutiny. Prominent Democrats, including Senate Minority Leader , of Massachusetts, of Ohio and of Rhode Island have called for probes and audits. Reed, in a statement this week, said he was “outraged” over reports banks had prioritized big customers and large-dollar loans to win higher fees.

In Massachusetts, Attorney General wrote directly to the CEOs of Banco Santander SA’s U.S. business, Wells Fargo, Bank of America and TD Bank, after hearing similar complaints. She asked for details on how the loans were handed out and what types and sizes of businesses received funding.

JPMorgan, Bank of America and Wells Fargo have all been sued by small businesses who say they were shut out because the lenders cherry-picked clients seeking large loans in processing applications. The Department of Justice has also launched a preliminary investigation into borrower fraud. While banks aren’t the targets, the development will likely add to their headaches.

Facing so much heat, some bankers now wish they had tried to stay clear of the Paycheck Protection Program. They also say the Trump administration probably should have used a more direct approach, providing money to deserving businesses through the Internal Revenue Service, much like the relief checks that went out to tens of millions of Americans.

Using the IRS “would have been much better,” said Consumer Bankers President Hunt.