Washington D.C.'s sports betting operation has the odds stacked against it while struggling to meet expectations.

Sports fans face numerous challenges placing their bets within the district’s hybrid set-up—it’s the only jurisdiction that regulates private operation and also manages its mobile sports betting platform. They can only use a few private retail sportsbooks and mobile wagering is limited as it must be within a two-block radius of betting facilities. The city also faces an increasingly competitive market with adjacent Virginia, which has major sportsbooks such as DraftKings, FanDuel, and PointsBet.

As a result, D.C.'s fledgling operation is falling far short of revenue projections in contrast to the dozens of states that also have recently added taxes from sports betting to boost their budgets. Sports betting has been legalized in 35 states, Washington, D.C. and Puerto Rico since the Supreme Court lifted restrictions on it in 2018.

Although a handful of states have adopted some aspects of rules from the district’s unique sports betting law, none have replicated the structure of its sports betting market. The result of that business model, gaming associations and analysts say, has been lackluster revenue.

“It’s a bit of a clunky system that they put in place,” Casey Clark, senior vice president at the American Gaming Association said. “A move to a more competitive sports betting framework, with the increases in consumer protections and enhanced tax revenue for the district, would really be a good thing for the residents in the district.” 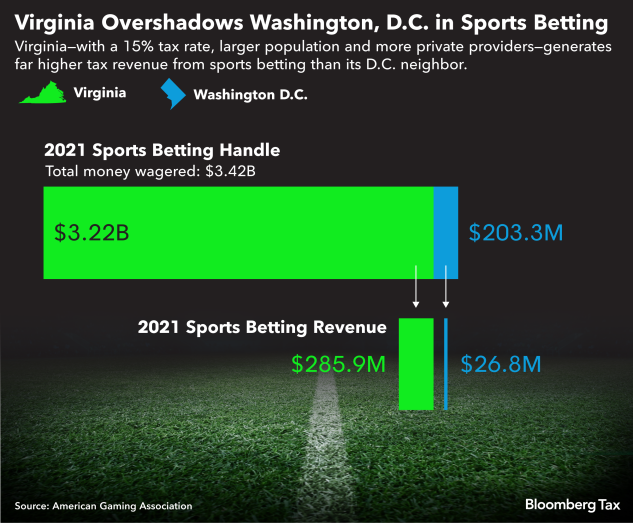 Critics say the district lacks more established providers and multiple access points. Rules require gamblers to be within a couple of blocks of sportsbook operators to use their apps. The city-run platform has suffered from glitches that have turned customers away—one of its failures being during the Super Bowl in March, one of the world’s biggest sporting events. Moreover, a large chunk of the district is out of play: betters can’t place wagers on federal property, such as the Washington Monument or the Lincoln Memorial.

Three years after sports wagering became legal, the D.C. Office of Lottery and Charitable Games has sent $2 million to the district’s General Fund. But when the law passed, officials had estimated it would generate $6 million through 2022. Revising revenue forecasts is not uncommon in gaming, Steve Ruddock, senior gaming analyst for Props, says, but the capital has lowered its estimates considerably.

The DC Office of Lottery and Charitable Games said its first year was affected by the Covid-19 pandemic—as closures curtailed business operations and travel by commuters from neighboring Maryland and Virginia—and the office prioritized rolling out mobile operations in 2020. The app brand also needed more market recognition, the office said.

“Predictions in terms of what the revenue could be and the interest could be, I think it was a little hot,” said Nicole G. Jordan, director of Marketing and Communications at the DC Lottery. “We’ve now been able, with years of experience, to resize the expectations.”

On the contrary, the pandemic should have been a boost, Ruddock argued. “Online gambling companies had some of the best quarters ever during the pandemic,” the analyst said. “If land-based casino options aren’t open, then you have people looking to gamble and online auction was the only option.”

The city’s mobile sports betting app had 71,770 registered users in January this year, according to DC Lottery, with 98% of them registering when the app was in launch momentum between 2020 and 2021.

Sports betting in the city is an “additive”, or extra tax revenue, for the DC Lottery, Ruddock said. It has little incentive to work better. “In monopoly markets, there’s nobody pushing, there’s no competitor that’s making us better. So whatever you have is what the consumer gets.”

SportsHandle analyst Chris Altruda said the city’s 10% rate makes it difficult for the DC Lottery to meet revenue projections. “When you look around in the case of Illinois, it’s 15%,” he said. Others also are higher with Tennessee’s tax rate at 20% and Maryland and Virginia at a 15% tax rate, he added.

Another strike, says Altruda, was having Intralot as the platform operator. With FanDuel or DraftKings, “it might have been easier to generate a higher handle” or money wagered, which “has the potential to generate higher revenues.”

The city’s sports-betting app, GambetDC, met a major snafu in the spring when it didn’t work for some Apple iOS users during the Super Bowl, leaving many district residents unable to place bets.

DC Lottery said the app didn’t crash, but the provider failed to ‘update certifications.’ “GambetDC was not down, you just had to access it in a different way,” Jordan said.

DC Lottery said gamblers could still bet at retail stores and also offered a $10 free bet for their inconvenience. “We did not see a significant drop in betting wages that day,” Jordan said, adding that the office received a compensation of $500,000 from the vendor for DC Lottery incurring “reputational damage.”

The challenges of the district’s sports betting market could be a win for Virginia and Maryland, which are both within striking distance.

Last year, gamblers bet $203.3 million in the district compared to $3.22 billion in Virginia, according to the gaming association. District revenue, which has a 10% tax rate, was $26.8 million. Virginia on the other hand, with a 15% tax rate, generated $285.9 million. Maryland is expected to launch its mobile market in the fall.

DC Lottery said the general expectation was that they would have more Class A locations, which are operators whose license would allow them to have their own mobile sportsbook. “They are coming slowly,” Jordan said. “But unlike other jurisdictions, we don’t have casinos in the district. Operating a sportsbook is very much like opening a casino.”

The District of Columbia launched its retail market a year ago and has since opened 52 locations. Many sports betting machines were added to restaurants and bars.

As long as D.C. generates some income, even if it doesn’t meet industry expectations, the agency will still be fulfilling its objective. “The DC Lottery goal is to generate tax revenue. So from their perspective, they’re doing exactly what they want to do,” Ruddock said.

To contact the reporter on this story: at aserrao-roman@bloombergindustry.com