I’m often asked what I like best about being a lawyer.

The truth is, I don’t always love being a lawyer.

When I was a little girl, I watched “Perry Mason” reruns with my grandfather. It made up, at the time, my entire understanding of the legal profession—I didn’t really know any lawyers, and no one in my family had ever been to college, much less law school. But one of the things that appealed to me was that no matter how dire, how dramatic, there was ultimately justice.

And when I went to law school, I was excited to learn that the law is supposed to be about justice, about finding the truth. But some days, in practice, it didn’t feel that way.

A few years ago, I attended a hearing on an estates matter that made me question my role in the profession. And I wrote about it. It is one of my favorite stories, so I’m sharing it again—this time, with you.

When I say that I questioned my role in the profession, you probably assume that the case didn’t go well. That isn’t true. It went remarkably well. Our client was an excellent witness. The judge was fair and very accommodating. And we walked out of the courtroom knowing that we had done a good job.

Later that day, I thought back to the case and tried to make sense of how it all happened that we were in the same room believing two different versions of the truth. I couldn’t explain it.

And I thought about the pressure of being a lawyer, the stress of having to win—it can be a lot to take in. And while other professions can often look to each other for reassurance, we don’t really have that in the legal profession, with few exceptions. It is, by its very nature, adversarial and competitive. And me? Of course, I like to win. I like to think that I am good at it. And then maybe I think that’s not something to be particularly proud of.

So I tried to remember why I became a lawyer—and what about it I used to love. I was reminded of my favorite scene in the movie “Philadelphia"—the one where Andrew Beckett testifies:

I wondered when that happened last—when I felt like I was a part of justice being done. Not when I won a case or got a client out of trouble—that happened often enough. But winning and justice aren’t necessarily the same thing.

Later, I was preparing to write an article about Martin Luther King Jr. Day. As I researched, something caught my eye: I knew that Dr. King had been arrested several times, but I had not realized that he had been on trial for tax evasion.

In 1960, Dr. King became the first person prosecuted under the state of Alabama’s income tax perjury statute. He was specifically accused of allegedly falsifying his Alabama income tax returns for 1956 and 1958.

After his indictment, Dr. King was asked by a reporter, “Have your income tax returns been investigated before?” He replied, “Oh yes, they have been investigated two or three times before. This is nothing new.” The case would eventually go to trial, and it seemed like a sure victory for the government. 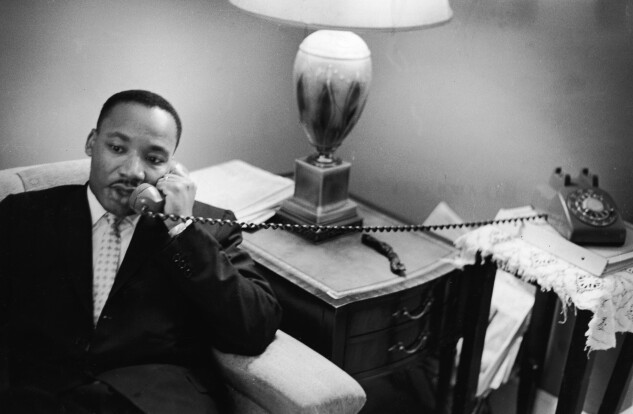 American civil rights leader Dr. Martin Luther King Jr. sits on a couch and speaks on the telephone in Montgomery, Alabama on May 26, 1961.
Photographer: Express Newspapers via Getty Images

In his autobiography, Dr. King described the trial, writing, “This case was tried before an all-white Southern jury. All of the state’s witnesses were white. The judge and the prosecutor were white. The courtroom was segregated. Passions were inflamed. Feelings ran high. The press and other communications media were hostile. Defeat seemed certain, and we in the freedom struggle braced ourselves for the inevitable.”

But something quite remarkable happened. On May 28, 1960, only after a few hours of deliberation, Dr. King was acquitted.

Dr. King said about his trial, “I am frank to confess that on this occasion, I learned that truth and conviction in the hands of a skillful advocate could make what started out as a bigoted, prejudiced jury, choose the path of justice. I cannot help but wish in my heart that the same kind of skill and devotion which Bill Ming and Hubert Delaney accorded to me could be available to thousands of civil rights workers, to thousands of ordinary Negroes, who are every day facing prejudiced courtrooms.”

When I read those words, I realized that you can’t dispute that justice is attainable. And justice is important. And even if it is infrequent, it’s worth it when it happens.

So that’s my answer. That is what I like best about being a lawyer—and specifically, being a tax lawyer.

As tax professionals—including not only tax lawyers but EAs, CPAs, and more—we have the opportunity to make a difference in the lives of our clients. That’s a pretty remarkable gift.

I know that many of us in the tax profession have felt overwhelmed—and even burnt out—since the onset of Covid. And it can be tough to find a silver lining. But I hope you can take some time this week to remember what you like best about what you do. And this week, as always, our experts have the latest federal, state, and international tax analysis to help you stay on top of developments—so that you can focus on what really matters.

Dr. King was indicted in 1960 on charges that he had signed fraudulent tax returns for 1956 and 1958. A state audit of his returns claimed that he owed the state how much?
Answer at the bottom.

This week, our experts touched on a wide range of topics, from transfer pricing to taxpayer protection. For a look at what’s making news, here’s our roundup:

Risk management is a primary focus for management in any business. In the current era of uncertainty, REITs should consider a second look at transfer pricing arrangements, say Stephen Bertonaschi and Kenneth R. Bernice at FTI Consulting, Inc. in Post-Covid Considerations for REIT Transfer Pricing.

Internal consistency protects taxpayers from potential multiple taxation. But a recent case, now on petition for certiorari before the U.S. Supreme Court, erased that protection. In Internal Consistency Erasure and Taxpayer Protection, Jamie Zug of McCarter & English LLP looks at what that could mean for taxpayers moving forward.

In Tools to Help Tax Administrations in their Digitalization Journey, Alfredo Collosa analyzes tools, frameworks, and other offerings available to help tax administrations consider and address the challenges associated with digitalization.

Stock options are a popular form of compensation, but they can be tricky. In Recent Lawsuit Highlights a Potential Equity Compensation Trap, Dan Morgan of Blank Rome LLP takes a look at a recently filed lawsuit that focuses on the tax problems that can result from the timing and restrictions of shares.

In Australian Federal Court Judgment Against Singtel In Transfer Pricing Dispute, Paul McNab of DLA Piper discusses the recent landmark court ruling of the Federal Court of Australia in a transfer pricing dispute involving Singapore Telecom and the Australian Taxation Office, in which the Court dismissed the taxpayer’s appeal.

In Tax Changes in Malaysia’s 2022 Budget, Irene Yong of Shearn Delamore & Co. looks at some significant changes to the Malaysian tax system in 2022, including measures to ameliorate the economic impact of the Covid-19 pandemic, which have been introduced in the recent budget.

An estate tax charitable deduction isn’t always guaranteed—especially when there are questions about how much may be ultimately distributed to charity. In Recent Case Highlights Risk of Denial of Estate Tax Charitable Deduction, Richard L. Fox looks at a recent case that focuses on this issue.

As tax season nears, mailboxes and inboxes across the country are filled with tax forms. And this year, confusion is already swirling around changes to Form 1099-K. While those form changes won’t officially kick in until next tax season, here’s what you need to know in 2022.

Twitter lit up recently over a post reminding taxpayers to declare income from illegal activities. Some users couldn’t believe that it was real. But the declaration—which is not new—can be found in IRS Publication 17. Here’s a surprising look at what income is taxable—and what isn’t.

The IRS is facing some major issues ahead of the Jan. 24 launch of tax season. The agency entered the new year with millions of unprocessed paper tax returns and has long struggled to keep up with a deluge of phone calls from people and tax pros looking for assistance. In this week’s episode of Talking Tax, Bloomberg Tax reporter Kaustuv Basu talks with St. Louis-based tax practitioner Jan Roberg about the upcoming tax filing season.

What future developments could we expect to occur as a result of the OECD global minimum tax deal? On this week’s episode of the Taxgirl podcast, I’m joined by George Salis of Vertex, Inc., to talk about the OECD’s proposed global minimum tax plan.

It’s been a busy week in tax news from state capitals to D.C. Here are some of the stories you might have missed from our Bloomberg Tax news team:

Our Spotlight series highlights the careers and lives of tax professionals across the globe. This week’s Spotlight is on Wendy Walker, solution principal and resident crypto expert at Sovos.

At Bloomberg Law, we’re proud of our continuing efforts to highlight the next generation of leaders in the legal profession.

We’re thrilled to announce our call for 2022 nominations for “They’ve Got Next: The 40 Under 40,” Bloomberg Law’s special report recognizing the accomplishments of sterling young lawyers nationwide.