A worker disinfects a payment terminal in Moscow, Russia. Disinfecting every coin and banknote would be impractical.
Photographer: Andrey Rudakov/Bloomberg

Do we still need cash? Humans have used all sorts of things as stores of value — rare metals, strings of shells, even jugs of whiskey. Over time the objects have become more ephemeral, from coins to paper to digital forms.

In the U.S., debit cards first beat out cash as the top way to pay in 2018, according to a Federal Reserve survey. As the coronavirus pandemic spread in early 2020, some merchants in Seattle and Sydney tried to cash altogether, calling it unsanitary. (Some U.S. cities have made cashless stores illegal to prevent discrimination.) Still, fear of contagion could accelerate the general trend to more digital payments, according to the Bank of International Settlements. More than 75% of adults in Kenya use the mobile-wallet service , for paying bills or getting paid themselves. China’s central bank is already rushing to mint its own for a country where even street-food sellers in small towns will prefer to scan a on a mobile payment app such as WePay or AliPay than make actual change. A credit-card consortium is working to the system globally. In most developed countries, however, the value of cash in circulation has risen since the financial crisis of 2008-2009 along with the number of digital payments, suggesting cash (in large bills) is being increasingly used as a store of value in uncertain times, especially with rock-bottom interest rates on savings accounts. Despite the growth of digital wallets like Paytm, most Indians still rely on cash, as demonstrated when the government in 2016 suddenly replaced the larger bills that made up 86% of the cash there with new ones, aiming to curb “.” The resulting currency was so bad it cut into economic growth. 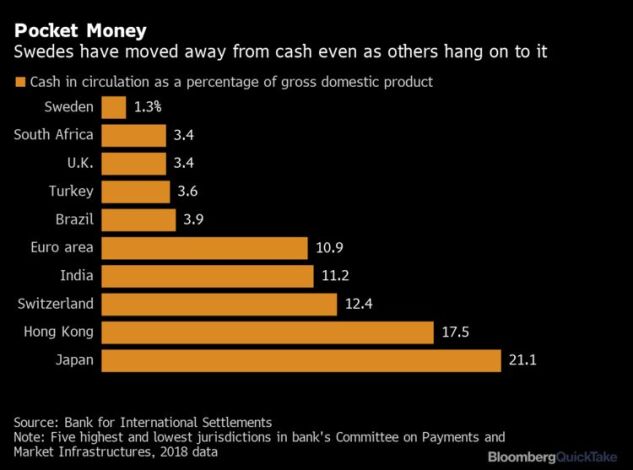 Since Roman times, people have tried out many alternatives to carrying loads of cash. Arab merchants developed bills of exchange for financing international transactions, a system that spread to Europein the late Middle Ages. The earliest known example of a modern check was written by hand and drawn on an account at Clayton and Morris, a goldsmith bank in London, on Feb. 16, 1659. The next revolution started with a forgotten wallet. In 1949, U.S. entrepreneur Frank McNamara visited the Majors Cabin Grill restaurant in New York and had an embarrassing moment before his wife paid the tab. But it gave him an idea, and months later he returned to the same restaurant, this time paying with a small cardboard card. Thus was born the credit-card industry. Shortly thereafter, banks began adopting computing systems that made it easier to keep track of money digitally. The first automated teller machine appeared in London in 1967, but debit cards only began to be issued in large numbers in the 1980s as ATM networks grew. Online banking took off in the following decade.

For governments, getting rid of cash would cut minting and distribution expenses and make it easier to crack down on tax evasion and drug trafficking. Stores could save on cash-handling costs, reduce theft and possibly earn more if faster checkouts led to more transactions per hour, as some salad chains found in a trial. (There are still card fees to consider; studies have differed on which mode ends up cheapest.) Some economists say that without cash, central banks could fight recessions more effectively because they’d have an effective way to impose — basically a tax on savings meant to spur spending. Critics say that in a digital-only economy, governments and banks could take control of your financial life, leaving you penniless with a flick of a switch. Phone networks can fail, or be vulnerable to a cyberattack or power outage, as residents of Puerto Rico found after . The Fed has stayed on the , saying there are “substantial” issues around cybersecurity to be resolved. For the world’s poor, going cashless would cut both ways. Facebook’s ambitious plan to create a global digital currency called Libra ran into a wall of political opposition over such issues as data protection, national sovereignty and money laundering, forcing a . Billions of people in the developing world depend on cash to buy small amounts of goods, often for mere cents. Not all of them can afford phones or other means of interacting with a digital cash network. Those without face becoming second-class citizens. On one hand, services like Paytm in India and Kenya’s M-Pesa have let people in remote villages try out newer services like micro-business loans. On the other, some people have found themselves by sky-high interest rates and hounded by e-debt collectors.

To contact the author of this QuickTake:
in London at ssivabalan@bloomberg.net

To contact the editor responsible for this QuickTake:
at joneil18@bloomberg.net